Follow up: 20-year-old successfully longboards from Paris to Madrid to fight climate change

You have to be the change you want to see in the world.

Stand for Trees and Connor

Last month, Connor, a 20-year-old from the south coast of England, set off on an epic longboarding journey from Paris to Madrid to raise awareness and funds to stop deforestation.

Through his go fund me page, he was able to raise $1,000 USD to help protect the threatened forests of the world through the Stand For Trees platform. The funding will be used to preserve critical habitats, protect endangered wildlife, support sustainable community development, and reduce greenhouse gas emissions. Read more here about how the platform works.

He just returned from his climate change fighting adventure and wanted to share his experience with us! 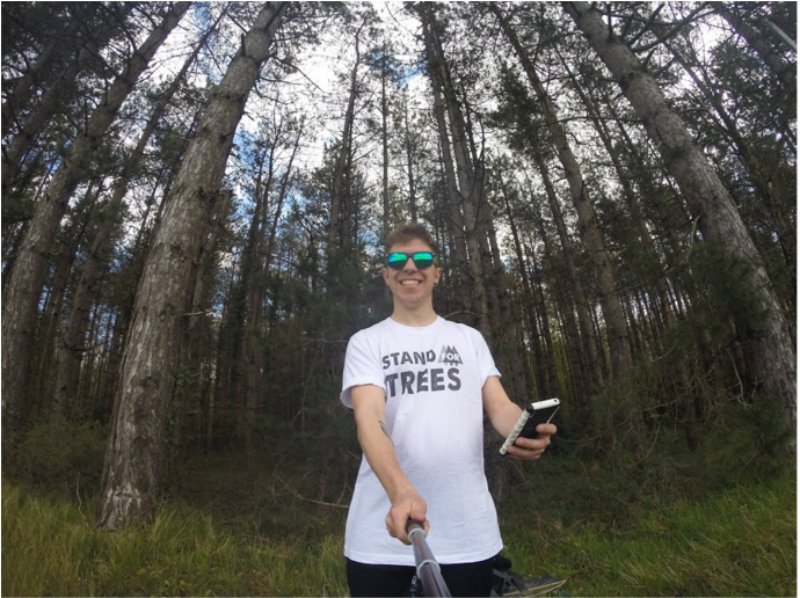 How do you feel now that you've completed your 5 week journey?

This is a hard question to answer, I feel so much. It is almost confusing to know [what] to focus on. My mind and my body feel exhausted and drained, but I would have to say the main thing I feel is both a sense of pride and disbelief [on accomplishing the journey.]

Can you tell us about the route that you took?

The route I took was a bit more challenging than I first thought, but then again, there is only so much planning you can do. Most of it went rather painlessly, but sometimes you have to be ready to adapt. The route roughly went from, Paris to Etampes to Pithiviers down to Orleans then following the Lorie river to Tours. From there, I was heading to Bordeaux, passing through Poitiers and Angouleme. From Bordeaux, I headed for the coast, I passed through places like Biscarrosse, Mimizan, Vieux-Boucau-Les-Bains and Hossegor. Finally passing through Bayonne and Hendaye to cross the border into Irun. This next part saw me pass through the mountains in the north of Spain, passing through Tolosa, Beasain, heading towards Vitoria. I then headed diagonally left towards Burgos. I headed down the country from there, aiming for places like Lerma, Roa, Sepulveda. At this point I changed direction and aimed towards Segovia. Finally from there, headed to Madrid. 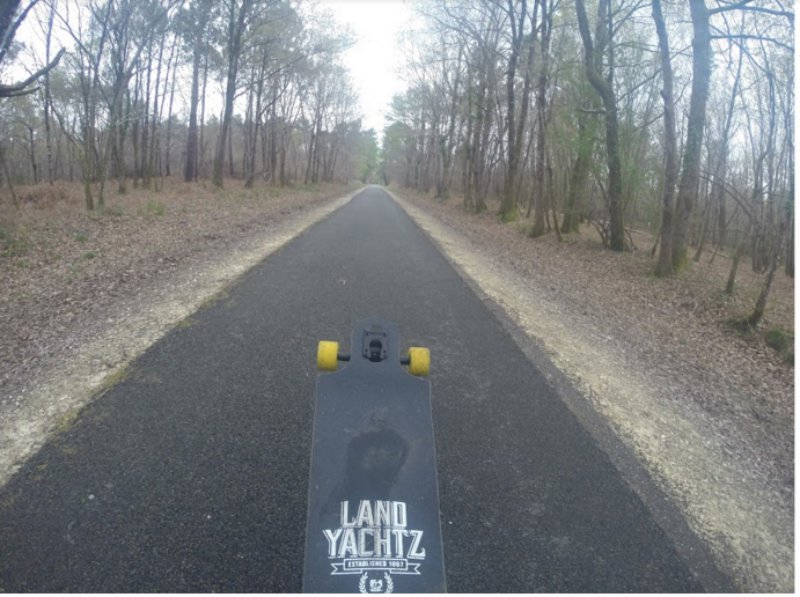 What was the first thing you did when you arrived to Madrid?

I wish I had a more interesting or exciting story to tell for this question, but if I'm completely honest, I checked into the hostel, had a shower and took a nap. After all that time longboarding I was so happy and overwhelmed to finally arrive at Madrid that the best way to celebrate was to sleep. Afterwards though, I had the pleasure of meeting a portrait, film and travel photographer by the name of Gyula. Together we explored Madrid's parks, he is a very talented film photographer and we have taken a photo of me in my Stand For Trees Tee, which will be exciting to see.

What were some highlights of your trip?

There was so much, I could talk for hours about the highlights. I think it has to be either, receiving a brand new longboard from the guys over at Landyachtz Longboards British Columbia, Canada. To this day I have no idea how news of my journey reached all the way over to Canada, but I'm so thankful they choose to do that, the board was a very welcomed gift which made the trip so much easier!

The other has to be the sights I saw across the north of Spain, the landscape was like nothing I've ever seen before, I couldn't believe it. From San Sebastián to Segovia, it truly was beautiful, especially skating in the hot sun, on a perfectly tarmaced road in the middle of nowhere and being able to see snow peaked mountains in the distance. They are views I will never forget. 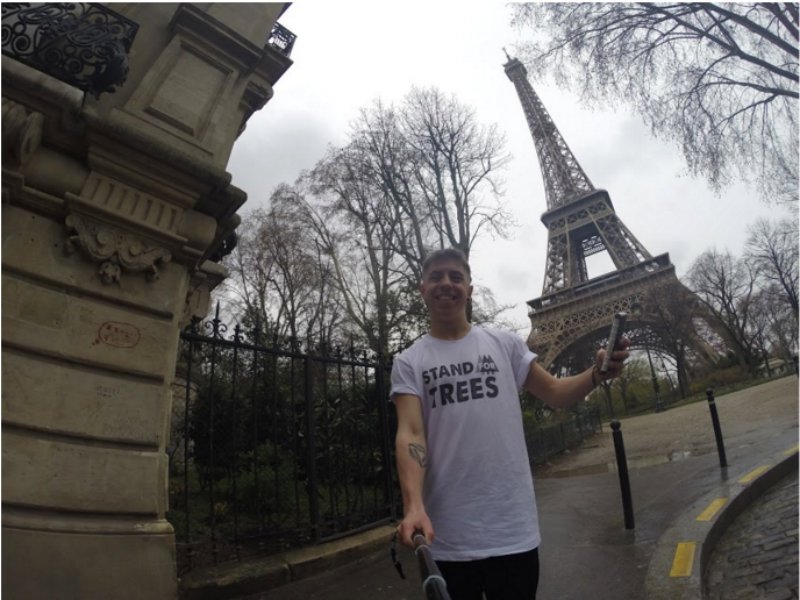 What were some of the tougher moments and what kept you going?

I'm sure this question is one I could of answered better in the moment of frustration, and when you are spent, even the littlest things can set you off. But, I think the toughest moments have to be these two:

1. When approaching Lerma in Spain, I thought I had planned so well, but unfortunately not, the roads I had planned to ride were in fact dirt roads which passed through private hunting property, which meant I had to ride along a very busy and fast road, looking back, I am very surprised I had the nerve to do it.

2. Near the end, it was the hottest day so far, and it was all uphill without any shade, needless to say I ran out off water rather quickly and with 10 miles still to go, I struggled to push on, I could feel the sun burning me and heat stroke coming on. But like with the other day you have two real reasons pushing you on - the first one naturally is knowing you'll be back in a bed by the end of the day. The other reason is knowing that you are doing this for something bigger than yourself, knowing that you are making a real difference.

How do you feel about having raised over $1000 towards protecting the world's endangered forests?

I honestly don't think I could put it into words, when I set out to do this I had no idea I would ever in a million years reach that much. I set out for about $400 if I was lucky. I feel so touched, honoured and humbled by everyone's generosity and support. Thank you to everyone that got behind me. I cannot wait you see the good that money will do. 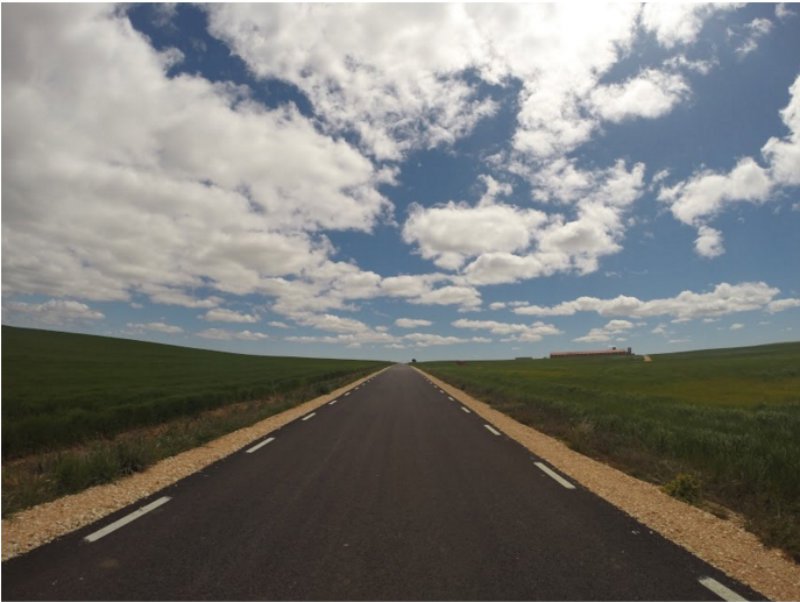 I want thank everyone. Everyone from the guys at Stand For Trees that have supported me, the Landyachtz crew, people that donated, people I met, everyone. This is such a great memory and something I will always be proud of and so many people inspired me and helped me do this, and for that I am so thankful.

What is your message to global citizens who want to take action to fight climate change?

My message to global citizens, it is probably something you've heard or read before, but it is so true. Anyone has the power to affect or change the world around you. You just have to decide which type of an impact you would want to make.

I know it's overwhelming at times, of course no one is perfect but one of the biggest threats is thinking someone else will do something.You have to be the change you want to see in the world, and remember, you are only limited by your own imagination.