At least 12 are confirmed dead in Grenfell Tower. But once more, the city responded with kindness. 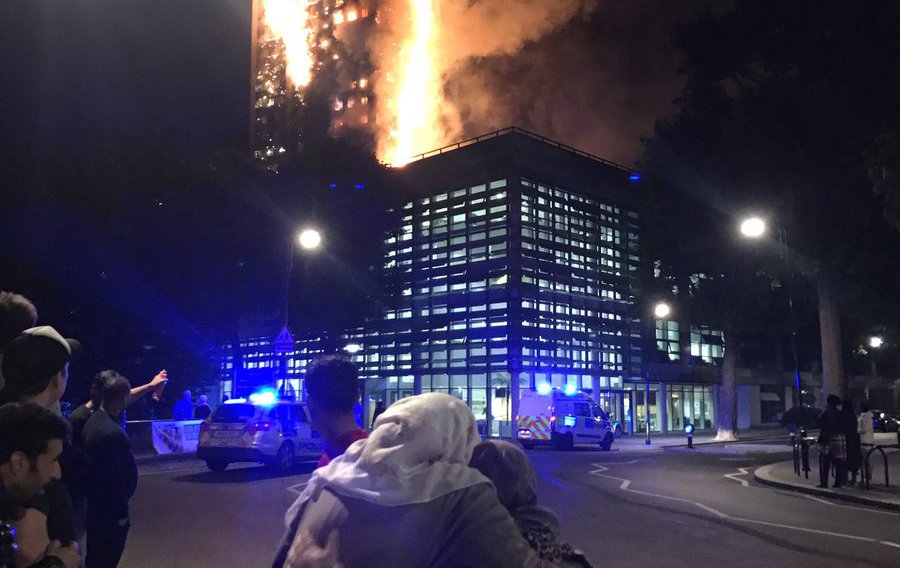 Last night, a fire engulfed Grenfell Tower in Kensington, London. At least 12 people have died, but authorities say the figure is likely to rise, as 68 more remain in hospital.

It’s yet another tragedy that’s hit a city still-grieving from two terrorist attacks in three months. However, in times of crisis, London's people will always come together. Londoners from every corner of society have stepped up to fight the fire and support its victims.

Approximately 200 firefighters were deployed with 40 fire engines to take on the blaze that erupted after midnight last night. An official statement released by the Fire Brigades Union offered condolences to the victims, and praised those who worked “through the night to secure the building and to save as many lives as possible.”

250 firefighters from across London are continuing to battle the #GrenfellTower blaze in Kensington. pic.twitter.com/TFbIArabZG

People have paid their respects to the bravery of the responders, who risked their lives once more to tackle the fire. Firefighters evacuated the building, floor by floor, to save those trapped inside the building.

The last few weeks have sadly reminded us how heroic our emergency services are. Fire, Police, Ambulance and NHS. All heroes #GrenfellTower

Sky reporting fire fighters are searching floor by floor and have reached the 19th floor, which is incredible.

so much respect for firefighters their bravery is outstanding always risking their life's to save others #GrenfellTowerpic.twitter.com/JnixGRoOMu

Several different faiths united to offer support. Places of worship opened their doors to displaced residents, as a variety of religious groups collected and distributed donations of food, water, and clothes. Indeed, some of the very first to react were Muslims who were just breaking their fast for Ramadan.

A church just outside the cordon is acting a a refuge for displaced residents pic.twitter.com/NJtgXyFRbX

Others used social media to offer assistance in any way they could. Anything from a shower to a place to stay, the general public were quick to reach out. By the morning, some community centres had to turn away donations after an incredible surge of support.

i live by #grenfelltower, if anyone needs a roof, food, internet connection, place to shower, my dm's are open contact me

I work near #GrenfellTower if anyone needs extra supplies plz DM. I'll be popping down to St. Celements/Rugby Portobello later today.

If anyone needs a cup of tea, shelter or to use a phone, my flat is really close by - please DM #GrenfellTower

Local businesses opened their doors, too. Phone company EE invited anybody needing to use a phone to visit any of their stores in the area, whilst others offered services to support the emergency response team. Even if it was just to offer a cup of tea, everybody pitched in to help.

We have a number of stores in the area of the #GrenfellTower
If you need to use a phone or social media to contact anyone, please come in.

@VidaOfficial_ if anyone needs a carer, support, anything- we will deploy carers and support workers for free - #GrenfellTower

Eyewitness accounts have reported that a baby dropped from a window “on the ninth or 10th floor” was caught safely by somebody waiting on the ground. Another resident saw a woman throw her five-year-old son out of fifth floor window, who suffered broken bones.

Related Stories May 23, 2017 12 Photos That Show the Best of Humanity After the Manchester Terror Attack March 27, 2017 CHIME FOR CHANGE Muslim Women Created a Human Chain Outside Westminster and It's Beautiful

At time of writing, a crowdfunding page setup to support victims has raised £26,532, beating its initial target by 663%. Celebrity chef Jamie Oliver has offered free food and drink at his local Italian restaurant in Westfield Shopping Centre. Singer Lily Allen offered food and shelter too, as multiple celebrities and politicians like TV presenter Jeremy Clarkson and Tottenham Labour MP David Lammy urged locals to donate supplies. Mayor of London Sadiq Khan has also issued a statement on the “horrific scenes."

anyone with spare clothes/toys/supplies or anything they can part with, please donate to 210 Latimer Rd in West London as soon as you can x

To any of the 100's of FAMILIES effected by this terrible fire at Grenfell Tower Notting hill today, You are all welcome to come hang out in my restaurant and be fed and watered by my Jamies Italian team. We are in the Westfield just around the corner. Food and drink free of charge so just go and speak to my manager Juan and we will sort you out and give you some love .... this is for victims of the fire our thoughts, love and prayers are with you all big love jamie x x x x

I'm truly devastated to see the horrific scenes of the major fire at #GrenfellTower in #Kensington. My statement: https://t.co/cVKB8L6IyWpic.twitter.com/mlPngrmy8T

It’s not known yet what may have caused the fire. But some reports have indicated that fire alarms were not heard by residents, and that tenants have been complaining about lax health and safety regulations since 2012.

There was existing fire safety concerns at #grenfelltower. Alarm didn't go off until 30mins after fire started. pic.twitter.com/0XF852B57b

The disaster is unprecedented. But the reaction of local Londoners is not. Humanity and community will always prevail at the most challenging of moments. Our thoughts go out to every family affected in any way by the tragedy.

If you are concerned for lost loved ones, the Metropolitan Police have posted official advice to call the Casualty Bureau on 0800 0961 233.

Ladbroke Grove in West London right now. This is the street I live on. pic.twitter.com/7W2HI1bWmq