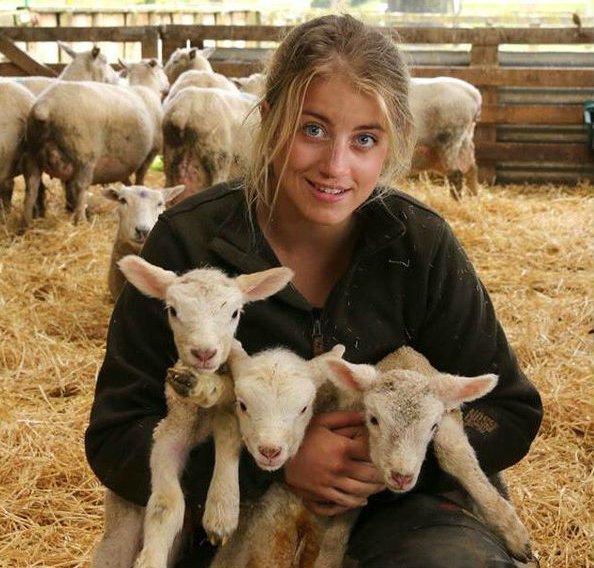 Stereotypes of farmers as Old MacDonald are being buried by the Female Farmer Project. One photographer is bringing empowering images of female farmers around the world to light with support from UN Women, UNFAO and the WFP.

Audra Mulkern is the female photographer behind the project capturing strong women who farm everything from fresh produce to healthy hogs. She’s traveled to Iceland to photograph third-generation female farmers milking goats, to small towns in the US where women weed rhubarb and rainbow chard, Her images capture the grace, and tenacity these women bring to a stereotypically male profession and lifestyle.

Editing images today for an exhibit in ROME! I am partnering with three United Nations agencies to exhibit images of women in agriculture across the US. So proud that my work will be introduced to the global stakeholders who are working towards womens empowerment and stomping out global hunger. @unwomen @unfao @ifadnews @unwfp Featuring @bigskyfarmer ⤴️ #FemaleFarmerProject #thisiswhereyourfoodstarts #lifeofafarmphotographer

It’s time to celebrate the beauty of women in farming and listen to their voices when it comes to agriculture. Women have long held down the farm, and it’s about time for the world to recognize women’s efforts in agriculture.

Globally, 43 percent of farmers are women according to UNFAO. And in some countries women account for 60-70 percent of farmers. However, women often don’t get the same control over land, or respect, as men in farming.Women also have less access to seeds, education, and credit services.

Empowering and supporting female farmers is key to feeding the world, and these images remind everyone that women are as strong and capable as men. They even bring a touch of mothering to the earth. That’s exactly what inspired the Female Farmer Project.

The concept for the project came to Audra Mulkern when she looked around her hometown in fertile Snoqualmie Valley and saw the disparity between the idea of tough men farming in her mind and the people she actually saw daily doing the farming.

She walked past women raising pigs, pulling weeds, planting seeds and knew she needed to share this with the world. Discussing her project, Mulkern told the Seattle Times “I’m trying to disrupt the face of farming -- while they disrupt farming.”

Thank you @rootedinthevalley for bringing us all together for International Women's Day. I've really enjoyed seeing everyone's posts today. I've met so many precious lady farmer friends via Instagram, you guys are a constant source of delight and encouragement. I am so grateful to have all of you to celebrate and mourn with depending on the day. So here's to all my fellow tender hearted badasses. #ILookLikeAFarmer #femalefarmerproject #iwd2016

Through the project she has met countless women with extensive insight and knowledge into successful agriculture. One person she met was Annie Novak who’s rooftop garden in NYC provides a rest for Monarch butterflies during migration. She understands the complexities and nuances of farming.

Shannon Eaton of @bluepepperfarm "Farming for me means not only being connected with my food and my community, but also honoring the interconnectedness of our soil, our pastures, our animals' health and happiness, and our health and happiness." #organicfarming #womenwhofarm #community #foodsecurity #foodjustice #picoftheday #CSA #womeninag #ilooklikeafarmer #celebratingwomeninagriculture #localfoodforlife #thegoodlife #marketfarm #foodsecurity #sheepmidwife #lambing2016 #adkfarming #adklamb #farmher #femalefarmerproject #ilooklikeafarmer #Regrann

“Farming is far more nuanced than most people know or look into.  We like soundbites and labels.  Even the word “organic” can carry a thousand different stories with it.” - Annie Novak

This was just two years ago with the very first pigs we raised. I was just so dang happy and proud of what we'd accomplished raising these beautiful girls. We were so scared to raise four hogs and now we have 32 on the ground. If you're just getting started, I encourage you to look for mentors, ask a ton of questions, and just go for it. You won't get it perfect, but the land and animals will guide you. The learning curve is steep, but keep going. You got this. #internationalwomensday #iwd2016 #femalefarmerproject #ilooklikeafarmer #animalwelfareapproved #berkshire #pigsofinstagram #forestraisedpork

Or Krysta Harden, who grew up on a peanut farm. She knows the strengths women in agriculture bring “to the table.”

“I think the biggest benefit to having women in farming is that women are used to multitasking and making quick decisions. Women have a different way of thinking that is very practical. Women are also more relatable and still make up the majority of food purchasers when it comes to food shopping for their families, so their opinions really hold a high value." -  Krysta Harden

The piece I wrote and photographed about Rand of One Leaf #ILookLikeAFarmer#FemaleFarmerProject#IAmAModernFarmer
https://t.co/GW8m0Rng8F

These are just some of the inspirational stories and women Mulkern gives a voice to through the Female Farmer Project. Each woman in the project addresses important issues and obstacles through their blogs and stories. They discuss issues that affect many of the women running the world’s 570 million farms, and offer solutions as well as awareness.

Check out #FemaleFarmerProject to learn more, or experience the importance of small-scale farming for yourself by learning about WOOF-ing (World Wide Opportunities on Organic Farms) options here.