Explosions in Brussels – what we know so far

EU capital on high alert after a series of explosions. 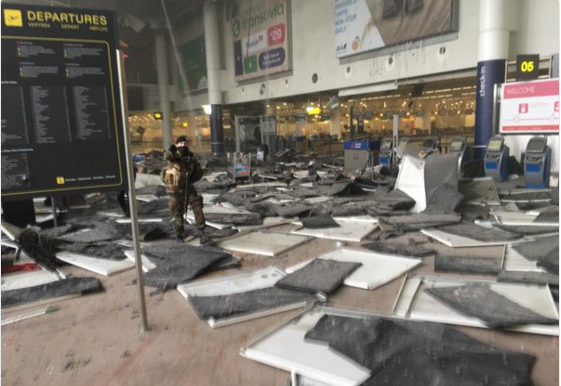 NOTE: This is a breaking news event. Details of the attack in Brussels are expected to be updated throughout the day. The last update for this article was March 22, 2016 at 11:24am GMT.

Reports claim the source of the explosion was by the American Airlines and Brussels Airlines check-in desks at around 08:30 am local time.

An hour later, a separate attack struck the city's Maelbeck Metro Station which is just 500m from the EU Parliament buildings.

This video purports to show passengers attempting to escape the Metro via underground tunnels:

Walking in darkness along metro tracks in Brussels - video via Jennifer Dassy of @RTBF LIVE: https://t.co/xmlDcDTtcWpic.twitter.com/yQkWA6epV0

So far, at least 21 people are confirmed dead.

The perpetrators behind the attacks have not been confirmed.

The attack comes amidst recent terrorism related events. The Brussels explosions come only four days after the arrest of Salah Abdesalam, who was pursued by police for his involvement in November’s Paris attacks. The events in Brussels today also follow an attack on Monday by Islamist militants on EU military headquarters in  Mali.

Belgium’s terror threat has been raised to high alert. All flights and Eurostar trains have been cancelled and the Metro has been shut down. Officials warn people not to move around.

There are conflicting reports on whether the France-Belgium border has been closed.

Belgian Crisis Center says all reports that the border between France and Belgium have been closed are false. Border remains open #brussels

The Belgiam Prime Minister has tweeted that the government is monitoring the situation minute-by-minute:

Translation: "We are following the situation closely. Our absolute priority is to support the victims and the people present in the airport."

In the wake of the attacks in Belgium, UK Prime Minister David Cameron called for an emergency COBRA meeting (a meeting of the nation's top leadership). He tweeted his support for Belgium in this time of crisis:

I am shocked and concerned by the events in Brussels. We will do everything we can to help.

The Belgian Red Cross launched a website  for people who are searching for relatives. On the website people can also indicate that they are safe. Facebook also activated its safety check feature.

Reports are expected to come in throughout the day as authorities seek to understand what happened and who was behind the attacks in Brusssels.