And with women still earning just 82 cents for each dollar a man earned last year, there’s still a long way to go to close the gender wage gap.

According to the Pew Research Center, the gender pay gap has shrunk over the last 38 years, but progress has stagnated in the past 15 years leaving many women trailing behind their male counterparts. Though pay parity has improved on the whole, the gender wage gap has actually widened for some women, meaning we may be even farther from achieving full gender equality than we’d hoped.

Here are six surprising facts about the gender wage gap that Global Citizen hopes won’t be true by Equal Pay Day next year.

1/ While the women in the US made 82 cents to every dollar men made last year, the discrepancy in pay is actually much larger for women of color. According to the Economic policy institute, black women are paid about 65% of what white men are paid and Hispanic women less than 60%. The gender wage gap is smallest between white men and Asian women, who still make $2.27 less per hour than white men.

2/ By the time they turn 60, college-educated Millennial women will have lost out on over a million dollars in wages, compared to their male counterparts, the Institute for Women’s Policy Research reported.

Cities like Philadelphia and New York City banned employers from asking job applicants to disclose their previous salaries in the hopes of narrowing the gender wage gap. Policymakers have argued that asking about compensation history, allows employers to anchor their offers to previous salaries, which for women and people of color are typically lower than that of their peers. But a study from PayScale, a salary database and software company, found that the policies may not be having their intended effect. PayScale surveyed more than 15,000 people and found that women who declined to disclose their salary histories were offered 1.8% less than women who shared their salary histories when asked.

Read more: Women Who Refuse to Disclose Their Salary Get Offered Less Money at Jobs

4/ The gender pay gap is narrower among young adults than working people in general — but it still persists. Overall, working women above the age of 16 make an average of 82 cents for each dollar men earn. For women between the ages of 25-34, that figure is nearly 10% higher at 89 cents to the dollar, the Pew Research Center reported. 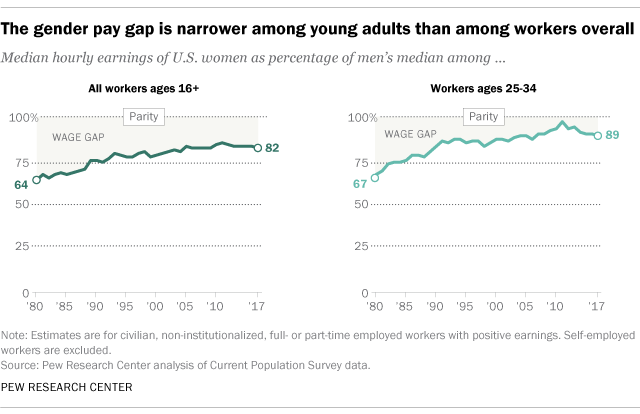 5/ No country has closed the gender wage gap yet — not even Iceland, which the World Economic Forum ranked 1st out of 144 countries in terms of establishing gender equality.

Global Citizen campaigns in support of gender equality and women’s rights and that includes equal pay. You can take action here to empower women and call on influential companies to support women-owned businesses.