Why Global Citizens Should Care
To achieve the UN’s Global Goals to end extreme poverty by 2030, we must also ensure that human rights are respected and adhered to worldwide. Join the movement by taking action with us here to help achieve the Global Goals and ensure that everyone can lead a just and peaceful life.

The hashtag #EndSARS first went viral in Nigeria in 2017 after several alleged victims published social media posts about extortion, harassment, and kidnapping at the hands of the Special Anti-Robbery Squad (SARS), a division of the Nigerian police force created in the early 90s.

At the time it was created, Nigeria had a big security problem that citizens argue now no longer exists. Over the years, the squad — and by extension the Nigerian police — have been repeatedly caught on video carrying out beatings and shooting at unarmed citizens, often without any consequences.

“My story with SARS actually began quite a while ago in 2012," Femi*, a design and graphics entrepreneur living in Lagos, told Global Citizen. "I used to drive a Toyota Corolla with bright LED headlights. Unknown to me at the time, this was a standard profile for ‘yahoo boys’ (internet fraudsters) plus the fact that I was light-skinned with a beard and piercings [somehow encouraged these people to target me].”

“Almost every week I got stopped, checked, and driven to the station even when they couldn’t find incriminating info on my mobile devices,” he continued. “This went on for quite a while with me having to call an uncle who knew a DPO (a mid-rank officer) at either Sabo or Pedro police stations [in Lagos] to bail me out.”

Every year since 2017, online protests — often led by hundreds of young Nigerians — have persisted and on Oct. 8, after a video of a SARS officer allegedly shooting an unarmed man went viral, the protests became physical.

For six days, young Nigerians all over the country have organised, marched, and campaigned peacefully against police brutality, using social media as an operating base. 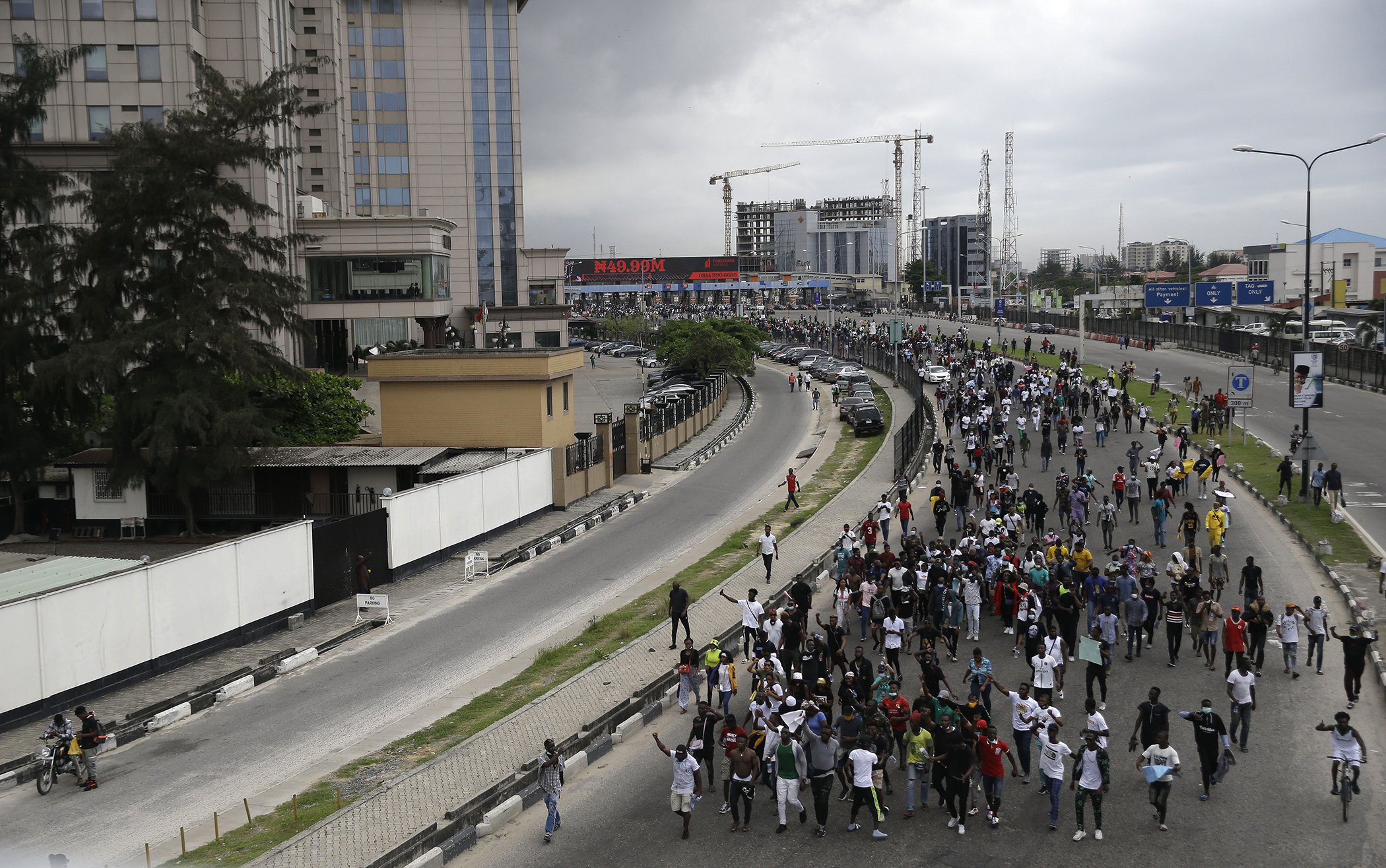 Protest locations, demands, resources, and even funding have all been coordinated mostly through Twitter. The creation of a website for victims of police brutality to tell their stories, feeding and sharing of protest resources, live reportage of the protests, production of anti-teargas spray for protesters, fundraising to support protest efforts, and legal representation have all been mobilised through social media.

Nigerian celebrities like Davido, Burna Boy, Adesua Etomi-Wellington, Runtown, and Falz have also added their voices to the movement with the latter two leading protests in Lagos.

Outside Nigeria, celebrities like Cardi B, Quavo, Wale, John Boyega, and Ian Wright have tweeted in solidarity. Nigerians in the diaspora have also protested in London, Berlin, and Washington DC. Activists Kiki Mordi, Aisha Yesufu, Feyikemi Abudu and Odunayo Eweniyi, among others, have also mobilised funds and logistic resources to support the movement.

Without a link to any political group, organisation, or singular individual, as well as a singular ask of the government — that police brutality end in Nigeria starting with the disbandment of the SARS unit — the #EndSARS protest has become the biggest movement for change of young people in Nigeria’s history.

The Nigerian police has a long, long history of corruption, harassment, and abuse of power. Over the years, many successive administrations have promised to reform the institution but in 2016, the Nigeria police force was ranked worst in the world. A corruption survey by the National Bureau of Statistics also found that Nigeria’s police officers are the most likely of all civil servants to collect and solicit bribes.

Most recently, these police practices have become increasingly discriminatory and economically harmful to their victims, even leading to death in some cases.

Evidently, the SARS issue is borne of this larger problem with Nigerian policing. Young low-income Nigerians working in the tech, entertainment, and services industries are often targeted as well as middle-class, white-collar professionals. Women and members of the LGBTQ+ community are also discriminately targeted, harassed, and extorted by SARS officers. Even tourists have reported being harrassed. 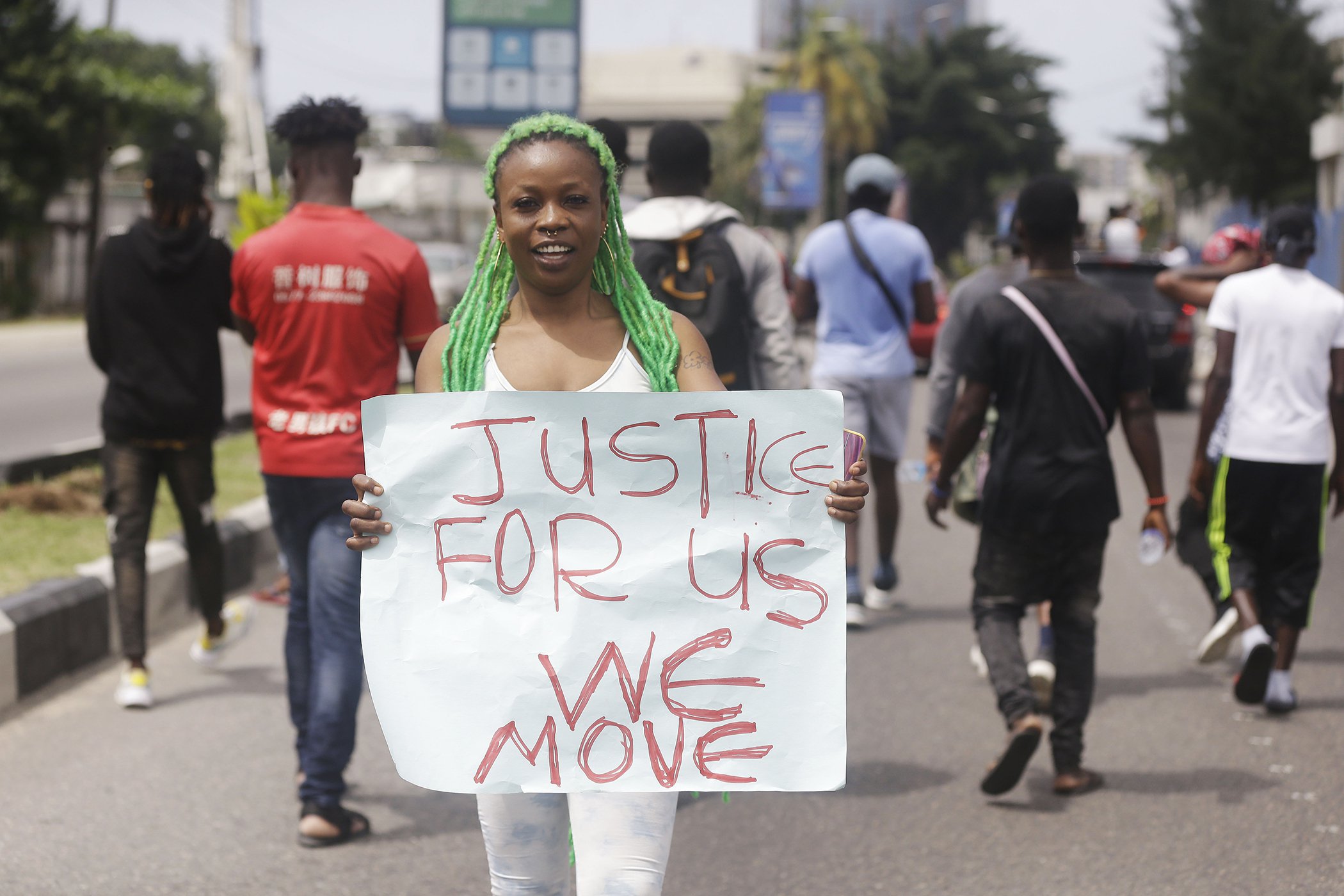 People hold banners as they demonstrate on the street to protest against police brutality in Lagos, Nigeria, Tuesday Oct. 13, 2020.
Image: Sunday Alamba/AP

“My friends and I (five ladies) were returning from an outing in an Uber when we were stopped. It was a five-man checkpoint. The reason we were stopped wasn’t stated. The first policeman... said he wanted to search the car, our bags, and us. We allowed him to search the car and our bags but insisted a female officer search us,” Mary*, a fitness trainer in Lagos, told Global Citizen.

She added: “We were persuading them, while being adamant on not letting them touch our bodies. [One] insisted that ‘Na IGP send us come here, he say make we search everybody wey pass here especially all you ashawos (Nigerian slang for prostitute)’. One policeman... hit me with his gun, slapped my face, and continually kept hitting me.”

“They were threatening to plant a gun in my bag and send me to jail if we didn’t pay them N10,000 ($26) for them to forget the case which we [eventually] paid. [One] continually kept cocking his gun, threatening to shoot me,” she continued.

These problems further limit the ability of young Nigerians to be economically empowered and lift themselves out of poverty in a country where more than half of the population are living in extreme poverty. Their quality of life is also affected by these practices.

Since 2015, the government and Inspector General of Police (IGP) have, in various ways, reformed and reorganised the SARS unit.

In 2017, after the first online protests, the government ordered a reorganisation and audit of the unit but reports of torture, extortion, and murder still persisted. Other versions of this reform and reorganisation were announced in 2018, 2019, and 2020 (after protests kicked off across the country). But none of these efforts have solved the problem.

Perhaps indicative of a deeper problem is the fact that Nigerian police have responded with excessive use of force at the protests in Lagos, Ogun, Oyo, the capital Abuja, and other places.

On Saturday, Oct. 10, 2020, the police killed Jimoh Isiaq when they opened fire on peaceful protesters at Ogbomosho, a town in Oyo State. The next day, eight people were killed in Ogbomoso; in Abuja, protesters were blasted with water cannons and tear gas; and shot at in Abeokuta. On Monday, several police officers were seen on video beating up unarmed protesters in Lagos, shooting and killing one person, and injuring many others.

"No one threw anything or did anything wrong. No one was being belligerent, but the police kept threatening us," Ndi Kato, who was at the Abuja march on Saturday, told CNN.

On Monday, one protester Ojabodu Ademola was arrested by police who were seen on video beating him. Later in the day, reports surfaced that he had been moved to another station with the Lagos State governor and the speaker of the House of Representatives (Nigeria’s lower legislative house) having to intervene before he was released. Another man was hit by a bullet after SARS officers opened fire during one of the protests in Lagos. He was not part of the protesters and died on the spot.

These incidents have all happened in spite of an announcement on Oct. 4 from the IGP disbanding SARS. In fact, the two killings in Lagos happened right around the time President Buhari’s address on the #EndSARS protest was posted on social media, heightening agitations further.

Many young Nigerians feel the government doesn’t have genuine intentions to reform the police, while others believe the police have too much power and lack the integrity to wield it.

Another issue young Nigerians are concerned about is the lack of consequences for these criminal acts. According to one protester: “Why has nobody been fired? Why has no one been held accountable for these crimes that are happening while the government is saying otherwise? Because the judiciary is also compromised.”

The Universal Declaration of Human Rights, which highlights fundamental human rights to be universally protected has now been in place for 72 years.  As a member of the United Nations and the Commonwealth, Nigeria is bound by this declaration and a petition has already been started, calling on the UK and US governments to ban all Nigerian government leaders and the police hierarchy until police reform is delivered.

Nigeria’s young people aren’t only fighting against discrimination and an end to police brutality, they are also fighting for Global Goal 16: for peace, justice, and strong institutions — which are important, because sustainable development and prosperity can’t work without peace, physical integrity, and protection by a stable legal system.