“We all want a tortilla chip that can support the weight of guacamole.” 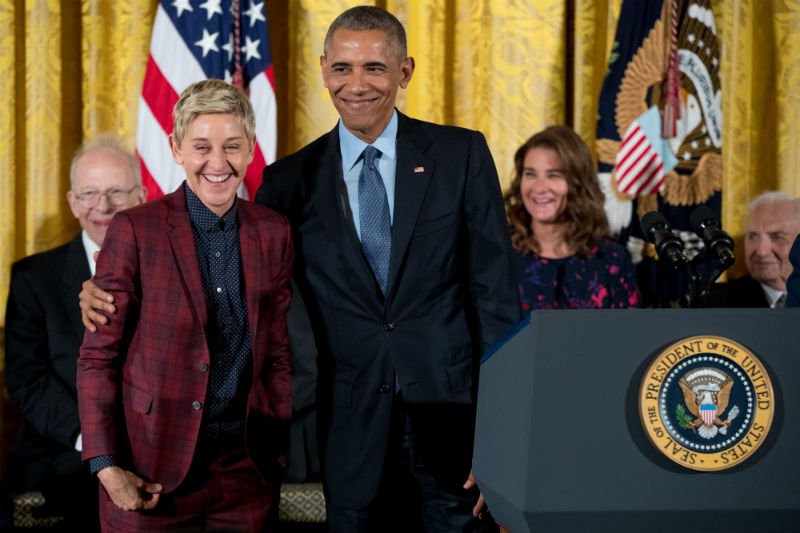 Comedian Ellen DeGeneres was awarded the Medal of Freedom, the highest honor bestowed by the president to a US civilian, for her instrumental bravery and influence in advancing LGBT rights.

President Barack Obama honored DeGeneres on Tuesday with a speech so moving it brought DeGeneres to tears.

DeGeneres is known for making millions of viewers laugh, spreading light-hearted joy and humor across the country. Her daily talk show, “The Ellen DeGeneres Show,” has more than 4 million people who watch each episode, and has won 32 Daytime Emmy Awards.

Today, DeGeneres stands effortlessly in front of the public eye every morning hosting some of the world’s most famous and influential celebrities, artists, and leaders like Malala, (and adorable kids), but what appears seamless today was not an easy journey.

In 2016, we often take for granted the outspoken courage DeGeneres effuses on her show. However, on Tuesday Obama reminded the world of the impact DeGeneres has had for the gay community and the wider world in advancing acceptance of LGBT rights.

"It's easy to forget now, when we've come so far, where now, marriage is equal under the law, just how much courage was required for Ellen to come out on the most public of stages almost 20 years ago," Obama said during the ceremony at the White House.

“Just how important it was, not just for the LGBT community, but for all of us to see somebody so full of kindness and light, to see somebody we liked so much...challenge our own assumptions,” he said.

Obama just made Ellen DeGeneres cry as she was getting a Medal of Freedom at the White House.

He went on to acknowledge the “incredible burden” that DeGeneres took on as she faced the public eye as an openly gay woman, and her push toward justice and freedom for the country to advance gay rights leading to equal marriage for same-sex couples. He quoted DeGeneres herself:

“But it’s like Ellen says — we all want a tortilla chip that can support the weight of guacamole,” he said.

The Medal of Freedom , unlike more formal awards such as the Medal of Honor, often reflects the personality of the president.