The age of the Jetsons is here! Well … sort of. 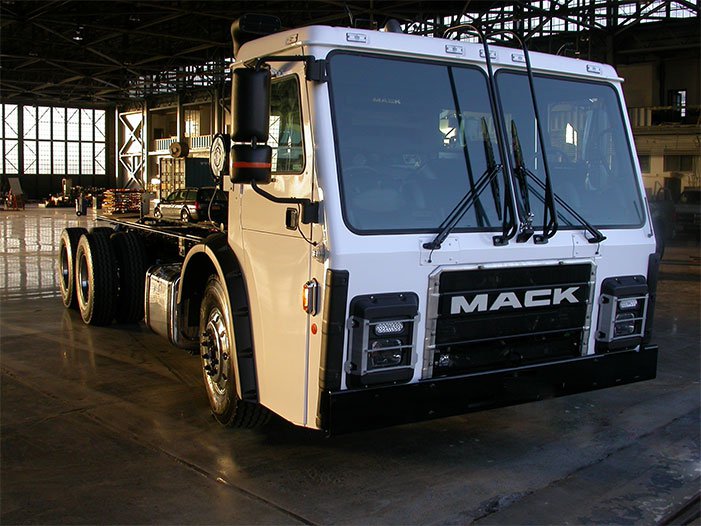 Mack Trucks showcased a Mack® LR® model retrofitted with the Wrightspeed Route™ 1000 powertrain in booth no. 1327 at WasteExpo 2016. Mack is the first OEM to evaluate Wrightspeed technology within a Class 8 refuse vehicle.
Mack Trucks

A 66,000-pound, jet-powered truck may soon be picking up your trash.

While the jet technology won’t propel garbage trucks into the air, it may be the hybrid revolution the waste management – and trucking industry as a whole – needs.

Heavy trucks collectively consume 2.7 million barrels of fuel a day in the US alone. This segment of trucks includes long-haul trucks and garbage trucks and accounts for 12.5 percent of the nation’s total greenhouse emissions.

Garbage trucks are particularly bad for the environment. Refuse vehicles produce almost twice as much emissions as lighter trucks, and have a fuel efficiency that is about half of their similar-weight, long-distance freight peers.

Garbage trucks are heavy beasts that carry the trash burden for a nation, mostly over short distances with significant, and wasteful, start and stops along their daily routes. On average, US garbage trucks travel about 25,000 miles a year. Consuming a gallon of diesel fuel every 2-3 miles, these garbage hogs are also sucking up the earth’s resources.

In New York City, where 2,200 of the nation’s more than 140,000 refuse trucks collect trash, trash collection accounts for 3% of the city’s overall carbon footprint.

Garbage trucks have been trying to go green

There has been a lot of effort to try and make garbage trucks “green.”. Chicago has ordered 20 all-electric vehicles from a company called Motiv (a competitor to Wrightspeed). Florida has 50 “hybrid” garbage trucks on the road that use regular engines to extend the range of an electric motor. And natural gas engines are becoming more common.

“About 10 percent of US refuse vehicles (including both public and private fleets) run on natural gas, but half of all new purchases are for natural gas trucks,” said Jeremy O’Brien, the director of applied research at the Solid Waste Association of North America, a group of public waste removal agencies.

READ MORE: Everything you never knew you wanted to know about garbage

There are significant problems with these efforts already. The pilot programs for all-electric vehicles have been fraught with lengthy breakdowns as well as the continual concern over the range an all-electric heavy vehicle can cover. Further, at least one study suggests that compressed natural gas trucks have lower fuel economy than standard diesel.

Another concern has been cost. New York City bought an earlier hybrid by Mack Trucks, each cost about $500,000, about double the average cost of a diesel garbage truck. It took large federal government subsidies to lower New York City’s effective purchase price to a competitive level — a process that is not sustainable for the entire country.

Wrightspeed’s new Route 1000 Powertrain system strives to fix all of this.

Wrightspeed was founded by Ian Wright, one of the early brains behind electric car company Tesla motors. Wright left Tesla early on, dabbled in creating the fastest electric car on the planet before setting his sights on revolutionizing heavy vehicles. The company now offers powertrain engines for large vehicles in three different classes: a “Route 250” for delivery trucks, a “Route 500” for busses, and a “Route 1000” for garbage trucks. 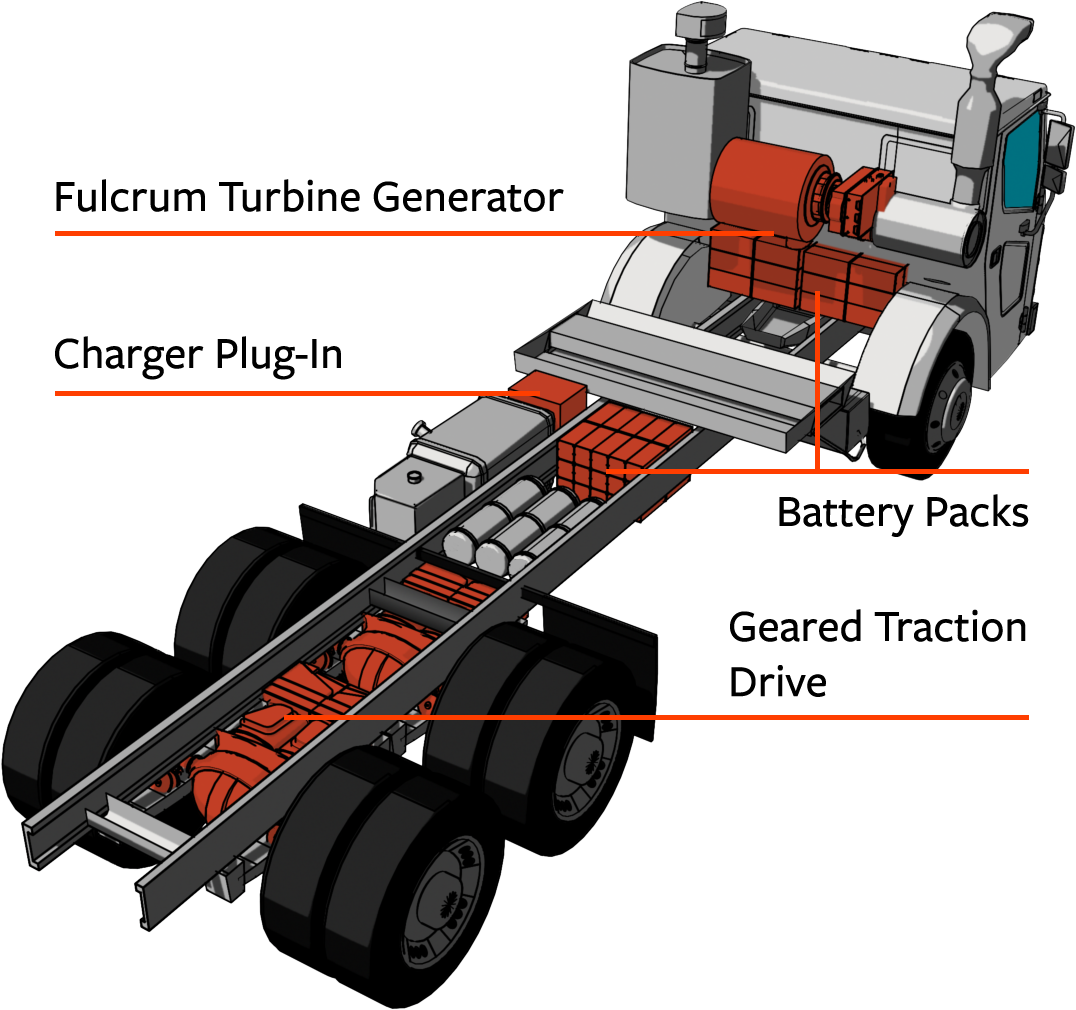 According to the company, the new Route 1000 has an all-electric motor range of about 24 miles, a top speed of 72 MPH, and can haul up 40% grades. Even more impressive, it claims to cut fuel usage by up to 70%.  All of that and the engine creates minimal emissions because it burns so efficiently and at a high temperature. “The exhaust is incredibly clean,” Wright told Wired Magazine. “You can meet California emissions without any after-treatment.”

READ MORE: This woman has produced less trash in two years than most do in one day

It does this through an ingenious mix of a high-grade electric motor, top of the line batteries, and an ingenious use of jet technology.

Wrightspeed’s engines at first glance are pretty standard electric engines, albeit engineered to be very powerful. The real revolution is the introduction of a “turbine-powered,” extended-range motor.

The top concern with electric vehicles is what happens when the batteries drain. To solve this, Wrightspeed looked at a variety of options to be the alternate engine. Many hybrids, including Wrightspeed’s, use regenerative braking technology that harnesses power each time a vehicle stops – a perfect solution for the frequent starting and stopping of a garbage truck. Yet this is not enough. Still an engine that can be switched on when the batteries run out of juice must be on board.

Wrightspeed looked to airplanes for the answer. Turbine engines differ from standard engines because they do not utilize pistons to generate power. In traditional attempts to put turbines in cars, the turbine is connected directly to the drive shaft. This makes the engines lighter, more powerful, and able to run on almost any fuel source. The problem is these engines have been almost too powerful. Despite major car companies experimenting with turbine-powered engines since the early 1950s, reliability concerns and handling issues have left them mostly in small-run or experimental cars.

Recently, Jaguar announced a new investment in turbine engines, but there were issues with miniaturizing the turbines efficiently. This is a challenge trucks do not have. Further, Wrightspeed’s turbine engines do not connect directly to the drive shaft — instead the turbine engine simply repowers the batteries. This allows the trucks to always run off of the electric motors and avoids any of the “over-powered” sense of previous turbine car engines.

READ MORE: Who Hong Kong Blames for Its Trash-Covered Beaches

Turning the turbine engine into simply an on-board generator has a further benefit: it always runs at peak performance. Allowing the electric motor to regulate the power needed to drive the car, the turbine simply runs at its most efficient level to send power into the batteries.

Making the switch to hybrid garbage trucks has a variety of barriers. Initial cost has been the most obvious. Most garbage trucks are run by local governments with limited budgets, making them unwilling to taking risks. Further, operators of the trucks prefer to have their whole fleet match so they can reduce maintenance costs (example: matching trucks only need replacement parts from one vendor).

Wrightspeed is working to bridge this gap. The initial pricing of the vehicles is still kept pretty quiet but reports of trucks ranging from $200,000 to $300,000 make the vehicles competitive to their diesel-powered brethren. Wrightspeed also offers retrofit kits that would allow truck operators to rip out their old or broken diesel engines and replace it with the Route 1000 powertrain. At one point the company said this would cost about $100,000, which is substantially more than a diesel engine replacement. Representatives of the company told Wired magazine that despite the higher upfront cost, the lower maintenance cost of the electric and turbine engine system would offset the cost differential in the first few years of operation.

Retrofitting existing trucks would lower operator concerns about having a mixed fleet of vehicles by keeping the bulk of the trucks similar even if the engine itself is different. And the recent consumption of natural gas powered trucks shows that operators are looking for alternatives, even if it requires mixed engine fleets.

Wrightspeed is getting on the road

The move toward hybrid and green vehicles is also getting help from the US government. The US Environmental Protect Agency (EPA), is proposing all heavy trucks in the US must increase their fuel efficiency by 40% before 2025. Wrightspeed’s engines would handle this new regulation and more.

Though the hulking vehicles carting your trash away or delivering your packages may look the same from the outside, you may soon be surrounded by futuristic jet-powered trucks performing all sorts of tasks with a much smaller carbon footprint. The age of the Jetsons may soon be on us.