In rural Wales, a pioneering and collective housing eco-venture is underway.

GLANDWR, Wales, Aug. 2 (Thomson Reuters Foundation) — Fighting climate change is much more than a day job for Chris Vernon and Erica Thompson. It is their entire way of life.

They are part of a groundbreaking Welsh government scheme under which people get to circumvent tight planning rules so long as they build an eco-home in the countryside and go back to working the land on which it sits.

The "One Planet Development Policy" was adopted by the Welsh government in 2011 and so far, 32 households have signed up.

The aim is ambitious: In a small country where people on average use three times their fair share of the world's resources, Wales wants its One Planet people to use only the resources they are due. Which means a simpler smallholding life, spending and travelling less, growing and making more.

A spokesman for the Welsh government said the scheme was an important niche initiative, rather than a model to scale up.

"It is intended to provide an opportunity for those wishing to live a highly sustainable lifestyle, project a light touch on the environment, and who will be largely self-sufficient in terms of income, food, and energy," said Matthew Morris, a communications officer with the Welsh government.

"Numbers of such developments are likely to remain small," he added.

Related Stories July 13, 2018 Ireland Is the First Country in the World to Divest From Fossil Fuels

The scheme has mostly attracted digital-era smallholders with a stubborn determination to return to a subsistence lifestyle in the rolling hills and valleys of rural Wales. And not to ruin the planet with a consumerist, throwaway lifestyle.

"We've known for 20 or 30 years now what we need to do to address the problem of climate change," Vernon said from his half-built home.

"We don't need more data. Whilst I was sitting in my office working on the computer I got the feeling I could be doing something that demonstrates how we can address the problems."

Vernon and his partner Thompson know more about "the problems" than most. She holds a PhD in climate science, he has one in glaciology and is a climate modeller at Britain's national weather service, the Met office.

They decided it was time for action, not academia.

Eight months pregnant and elbow-deep in local clay plaster, Thompson said their home had to be zero carbon in construction and use to win government go-ahead.

It sits deep in bucolic Pembrokeshire, a lush, coastal county in the southwest of Wales that pioneered the green approach before it was adopted countrywide. 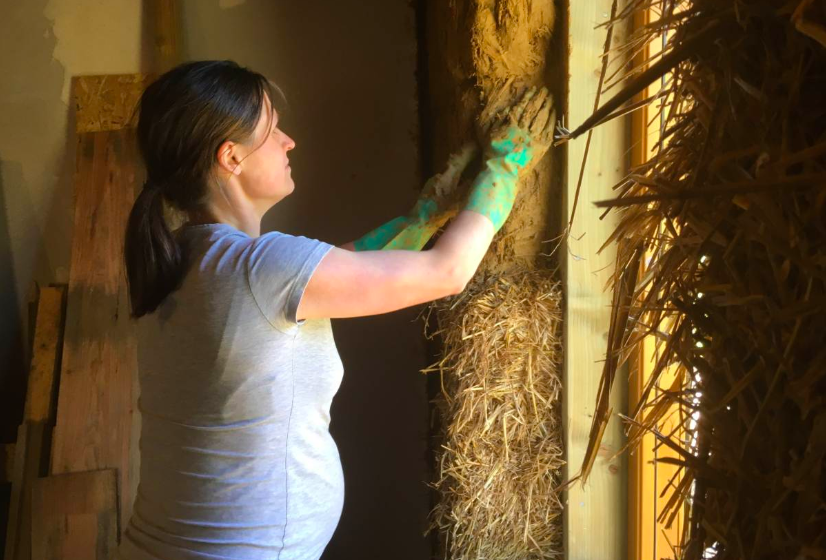 Just up the road lies the Lammas community, a pioneering and collective eco-venture where nine smallholdings nestle in the landscape around a central community hub.

The Intergovernmental Panel on Climate Change, the leading international group that assesses climate change, estimates that global temperatures could rise 3.4 degrees Celsius by the end of the century.

Amid a European heatwave running from North Africa up to the Arctic Circle, the Welsh initiative is taking root on the Western fringe of the continent in a bid to redress some of the damage.

The policy also aims to address a myriad of problems beyond rising temperatures, from soil degradation to rural de-population, a housing crisis to wasteful global supply chains.

It offers people with little money, but plenty of determination, a way out of the rat race and back to the land.

With property prices out of reach for many rural workers and tight regulations restricting new builds, the scheme is the only way for many locals to own a home and work nearby, said another One Planet home builder, Cathryn Wyatt.

Dairy farmer Brian Boman sums up the difficulties faced by locals seeking to live and work in the area.

"We have two sons both in their 30s, both involved in the business. We have more than enough room here, to build something on the farm for the pair of them, but of course planning is a huge issue," he told the Thomson Reuters Foundation.

In the 1980s, it would have taken a typical 20-something household about three years to save for an average deposit, according to the Resolution Trust think tank.

The research shows it would now take 19 years.

Like many of her fellow One Planet builders, Jacqui Banks wanted to jettison her old life and be true to her principles.

"It's a lot of work, in the early years, but what we're building is hopefully a resilient system that is going to help us have a positive impact on the world," she told the Thomson Reuters Foundation.

"Living in the city I found it extremely difficult — the consumerist lifestyle and the waste involved."

To get permission to build a One Planet Development, three requirements must first be satisfied.

First is the overall ecological footprint.

As Vernon explained, each household must only use their global fair share of land: "If you take the entire global resource … you divide it by the population of the planet, you get a number: 1.88 hectares, it's a fairly arbitrary number, but that's the number that is your fair share."

Each applicant must also show that within five years, 65% of their basic needs are covered by their patch of land, including food, water, energy, and waste.

Hence the hodge-podge of greenhouses and polytunnels that dot the land, often cobbled together from reclaimed materials and designed to make the most of a grass incline, woodland shelter, or power-generating stream.

Applicants must also come up with a zero-carbon house design using locally sourced and sustainable materials.

The result: a magical landscape dotted with "hobbit houses" straight out of JRR Tolkien's Lord of the Rings, with mesmerising wooden beams, grass roofs, and hemp walls.

Thirdly, everyone must set up a rural business to pay the sort of bills — internet, clothes, council — that cannot be met with a subsistence-only lifestyle.

Enterprises range from fruit wine to bees, an exotic tree nursery to sculpture — anything that brings in a small income.