How This VR Tool Can Help Surgeons and Transform Lives

EchoPixel and HP technology allows medical images to be seen and “felt” in new dimensions. 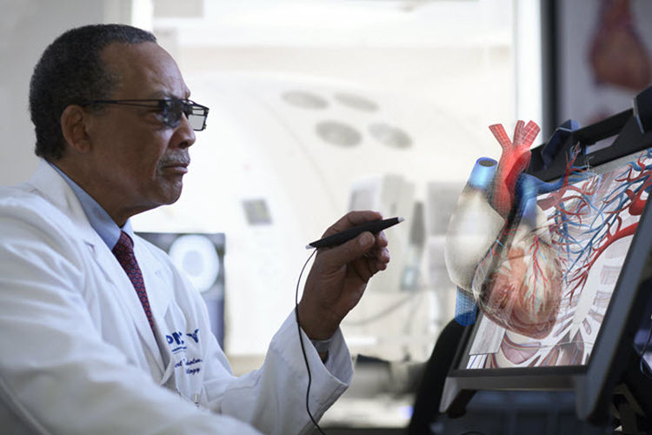 This article was contributed in support of HP and was originally published here.

Tech-savvy consumers who have been following the developments of virtual reality technology are likely familiar with the immersive gaming experience using VR devices such as Oculus Rift,Samsung Gear VR, and Google Cardboard. However, these devices use headgear that has limited application when it comes to being used by clinicians.

But technology innovators, including HP and partner EchoPixel, see a broader future for VR applications, such as those that enhance the lives of people during healthcare treatments. A leading example of this is True 3D —  a powerful tool that has gained FDA approval for certain applications. True 3D allows doctors to better analyze medical images, more accurately diagnose patients, and assist in the planning of complex surgical procedures.

EchoPixel True 3D Virtual Reality Solution, which is powered by HP, has been on the market since March 2015 but the FDA’s nod allows the system to now turn the corner on market acceleration by making the solution usable for diagnostic and planning purposes.

By applying the True 3D technology, physicians can interact with medical images the same way they would with real physical objects, enabling radiologists, cardiologists, and many other medical professionals to see patient-specific anatomy in an open 3D space.

“By working with valued partners like EchoPixel and leveraging emerging technologies like virtual reality, we can rethink how technology can blend the physical and digital worlds to improve the realm of healthcare,” said Reid Oakes, senior director of Worldwide Healthcare at HP.

The technology is already being used in clinical, educational, and research settings.

The True 3D tool comes to life with HP’s Zvr display, powered by zSpace Inc.’s technology, and the HP Z440 Workstation. The power of these tools together in one VR tool enables physicians to visualize and interact with 3D holographs of organs and tissue.

The system works by using four cameras to track the user’s head movements, glasses to turn images into 3D visuals, and a hand-directed stylus that allow users to move and interact with objects in real time.

“The technology has the power to transform lives,” said Oakes.