Justin Timberlake Risks Jail Time to Cast a Ballot, And More Celebs Who Are Voting Early

JT, Katy Perry, and Barack Obama have all cast an early ballot.

For the record, Justin Timberlake is NOT going to jail. But he most definitely did cast an early ballot this year. And you should, too.

Following in the steps of President Barack Obama, Timberlake flew from Los Angeles to Memphis to cast his ballot yesterday. The controversy came when he took a voting selfie (attention, young voters — this is not allowed), and posted it to his Instagram account.

It has since been taken down. 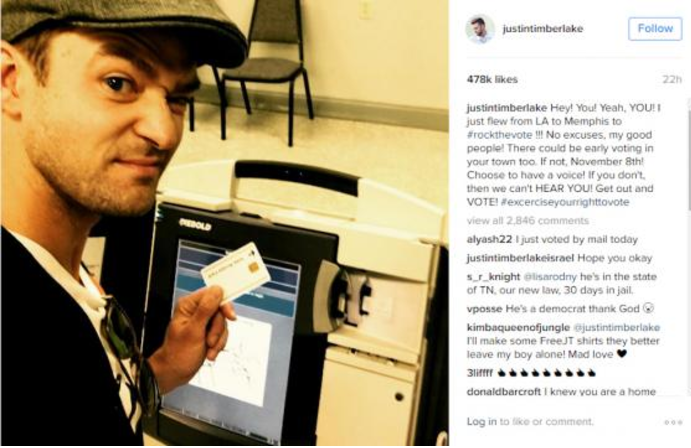 A new Tennessee law prohibits using mobile phones to take pictures inside the voting booth, which apparently JT was unaware of.

“We hope this encourages more people than ever to vote,” Tennessee Secretary of State Tre Hargett said of the incident. “But Tennesseans should only use their phones inside polling locations for informational purposes to assist while voting.”

For what it's worth, the state law banning the selfie might itself be unconstitutional.

There was speculation that Timberlake could face up to 30 days jail time after the District Attorney’s office released a statement that it was investigating election-law violations.

But on Tuesday evening District Attorney General Amy Weirich cleared the air: “No one in our office is currently investigating this matter nor will we be using our limited resources to do so.”

Timberlake is not the only celebrity to publicize his early vote on social media.

Katy Perry, who in August tried to vote naked at the California primary — also not allowed, apparently — decked herself out in an Americana outfit to cast her early ballot this morning.

GAVE MYSELF THE BEST BIRTHDAY PRESENT EVER BY VOTING TODAY❗️Wish @hillaryclinton a Happy Birthday tomorrow with your EARLY vote. Check www.rockthevote.com to see where your poll is. 🎂🎁🇺🇸 #HBDTOME #HAPPYBIRTHDAYHILLARY #SCORPIOSISTERS

Celebrities from Lil’ John to Aziz Ansari have released videos urging voters to cast a ballot.

The Clinton campaign has enlisted several high-profile musicians — Miley Cyrus, J-Lo, and Bon Jovi among them — to help #RockTheVote. The Trump campaign has touted the support of several celebrities as well, including Stephen Baldwin, Charlie Sheen, and Tila Tequila.

This Saturday I'll be in Miami for a benefit concert! #RockTheVote#Votepic.twitter.com/PNo9cvl0XG

Even Nick Offerman, comedian and actor from the series "Parks and Rec," relayed a message from his Ron Swanson alter-ego on Twitter.

I am frequently asked how Ron Swanson would weigh in on this election. I was able to contact a source close to Ron and here is the result: pic.twitter.com/2A0JWEgpgu

As of Sunday morning, around 6 million Americans have already voted. Celebrities are playing their role in ensuring that many more do so before November 8.

Global Citizen wants to help people get out to the polls. In the early voting states of Ohio and Florida, we’re hosting block parties.