Two years ago, a tragic building collapse in Bangladesh killed over 1100 people, most of whom were working in various garment factories inside the eight story Rana Plaza facility. This awful event was the deadliest accidental building collapse in modern human history, and brought a new level of scrutiny onto who’s making the world’s clothes, and the conditions that the garment workers are having to work in.

Since then, over 190 international clothing brands have signed on to an accord which lays out improved building safety and fire safety standards in for their factories in Bangladesh (which is the second biggest clothing manufacturing country in the world), giving me reason to hope that lessons learned from the Rana Plaza collapse will bring about a long term improvement in conditions.

Buuuuut, some clothing brands are clearly going to be upholding higher standards than others, even with accords in place. It’s hard to know which brands are making more of an effort than others, because pretty much all of them will boast in their annual reports about how fantastic they are.

Fortunately, an independent report has just been released in Australia by behindthebarcode.org.au, which grades 219 different brands on what they’re doing to stamp out slavery, child labour, and exploitation. The companies have been graded from A to F, and while an A grading doesn’t mean that a company is perfect, it at least means that they have strong systems and policies in place to reduce the risk of worker exploitation.

How did your favourite brands perform? 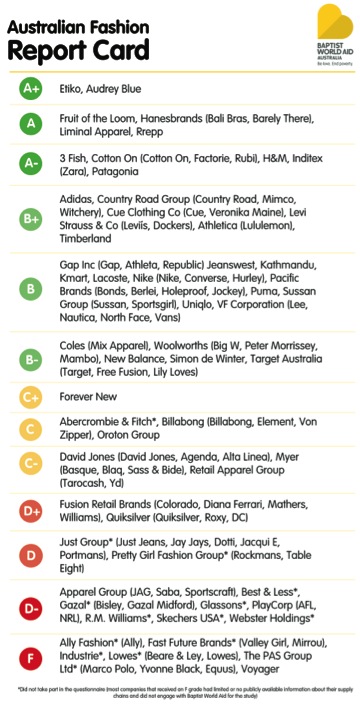 But you don't have to just sit there and think "oh, that's interesting", you can act.

Firstly, you can use reports like this to help you to decide what's best to buy. Support companies who are enabling their garment workers to live in dignity!

Secondly, you can contact companies who appeared in this report, either congratulating them or calling on them to do better. They need to please their customers, so your voice counts.

You can share this article around to people you know, so that they too can become informed about how what they purchase makes a difference to the lives of other people. You can get your hands on the full report at behindthebarcode.org.au.

Does your favourite fashion store make the grade?