‘This Is What Democracy Looks Like’: Why Protesters Take to the Streets

Up close and personal with the DNC protesters.

The night before, the DNC had formally nominated Hillary Clinton as the Democratic Party’s nominee for president. The announcement marked the formal end of Clinton’s main challenger for the nomination of Bernie Sanders.

With the party’s nominee settled and its platform for the 2016 elections locked in, it was hard to imagine what the activists milling around Philadelphia were hoping to influence or change. Yet there they were, filling the host city.

Getting up close and personal with activists with a wide range of political views revealed a fascinating consensus: the importance of publicly supporting your views. This is a message that spreads far beyond just one political convention.

Despite a few arrests and disruptions during the DNC, the streets of Philadelphia have been mostly peaceful and even congenial. More often than not the few protesters who actively represented opposing political views would end up chatting or exchanging fliers.

For example, one man who carried a graphic anti-abortion banner through a crowd of screaming Bernie supporters, stood politely to the side during the Black Men For Bernie rally. 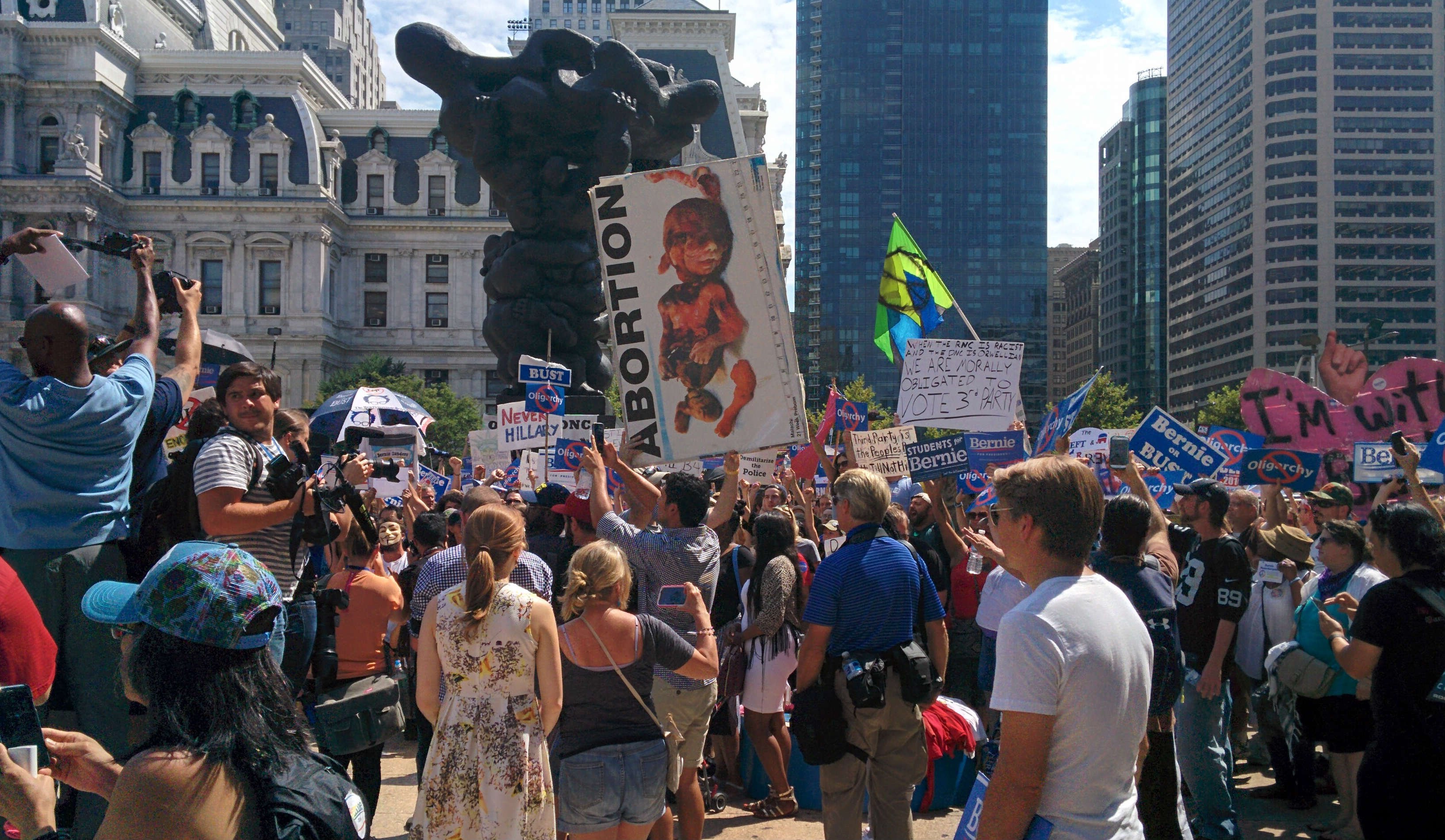 The anti-abortion advocate engaged people who seemed to disagree with him seriously, but mostly with a smile. The man, who declined to be interviewed or identified, cracked jokes about the day’s high temperatures putting everyone — not just people who were pro-choice — through hell.

And even the presence of protesters with opposing views seemed rare. By the third day of the convention, the pro-marijuana marches were over, and the streets were mostly filled with Bernie supporters. The loss of their standard bearer in the presidential election left the pro-Bernie Sanders supporters seemed generally sad and even a bit lost.

“The system beats you down,” said a woman who identified herself as “just Mia.” Mia drove in from Chicago to show her support for Bernie. “When you invest your heart into it and it doesn’t work out, it can be defeating. But you gotta keep trying and going.”

“I want equality for everyone. I don’t understand why it’s so hard for people to do that, to understand that, to live that,” Mia added as tears filled her eyes. 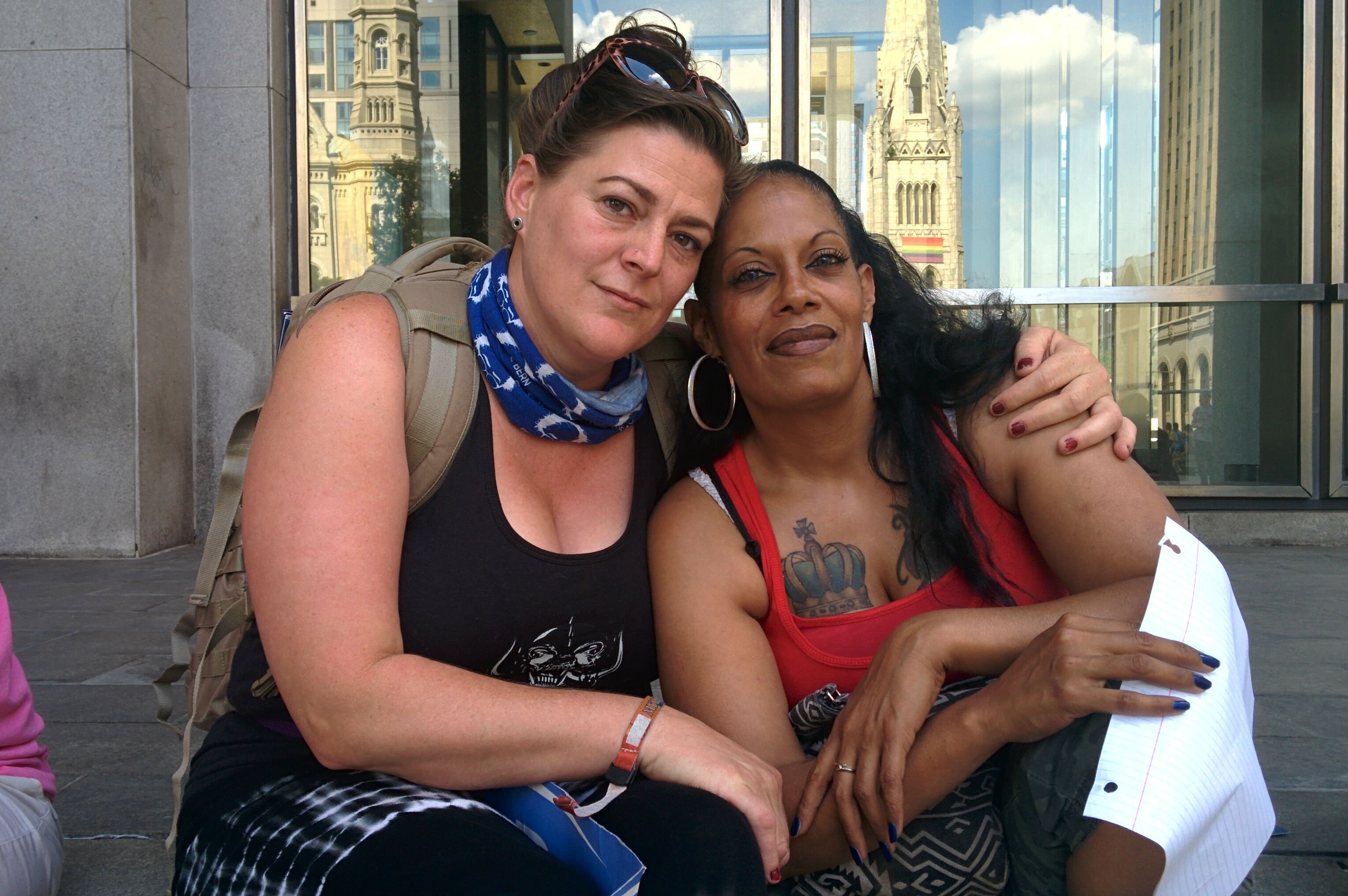 We “need to overcome the messages of division” said Mia’s friend and rally compatriot, Angel Gilarski. The Indiana resident tried to strike a more upbeat tone, “We need to start at the [local level] and fill in the gaps with progressive leaders.”

“We need to keep pushing and try to make a difference,” Mia chimed in. “If you stop, it’s all for nothing.”

Working for a better world beyond the DNC was a theme for the day.

“We need to build a movement beyond Bernie,” said Onel Manuel Martinez. “The first step is to create a political revolution. If we stay together we can create a system for everyone.” 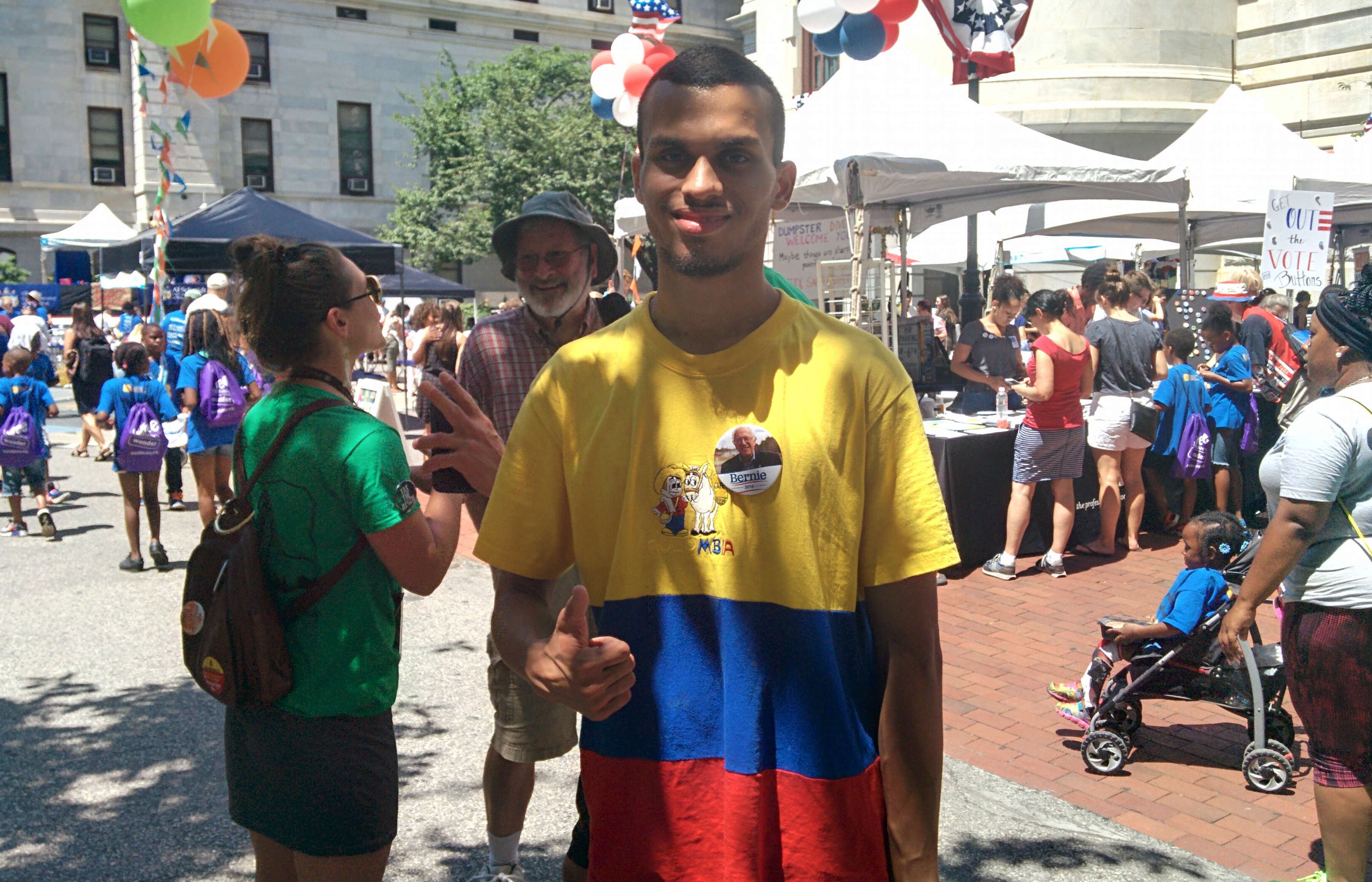 Martinez, a 19-year-old resident of Elizabeth, New Jersey, said he planned to run for mayor of his town in four years. He felt a personal responsibility to change things for the better and said he came to Philadelphia to “unite with my brothers and sisters from many different movements.”

Even diehard Bernie supporters like Oscar Salazar recognized the need to move beyond the contentious DNC and focus on seeking broader change.

“We can make change if we keep pushing on the state and local level. We must never give up hope”, Salazar said. 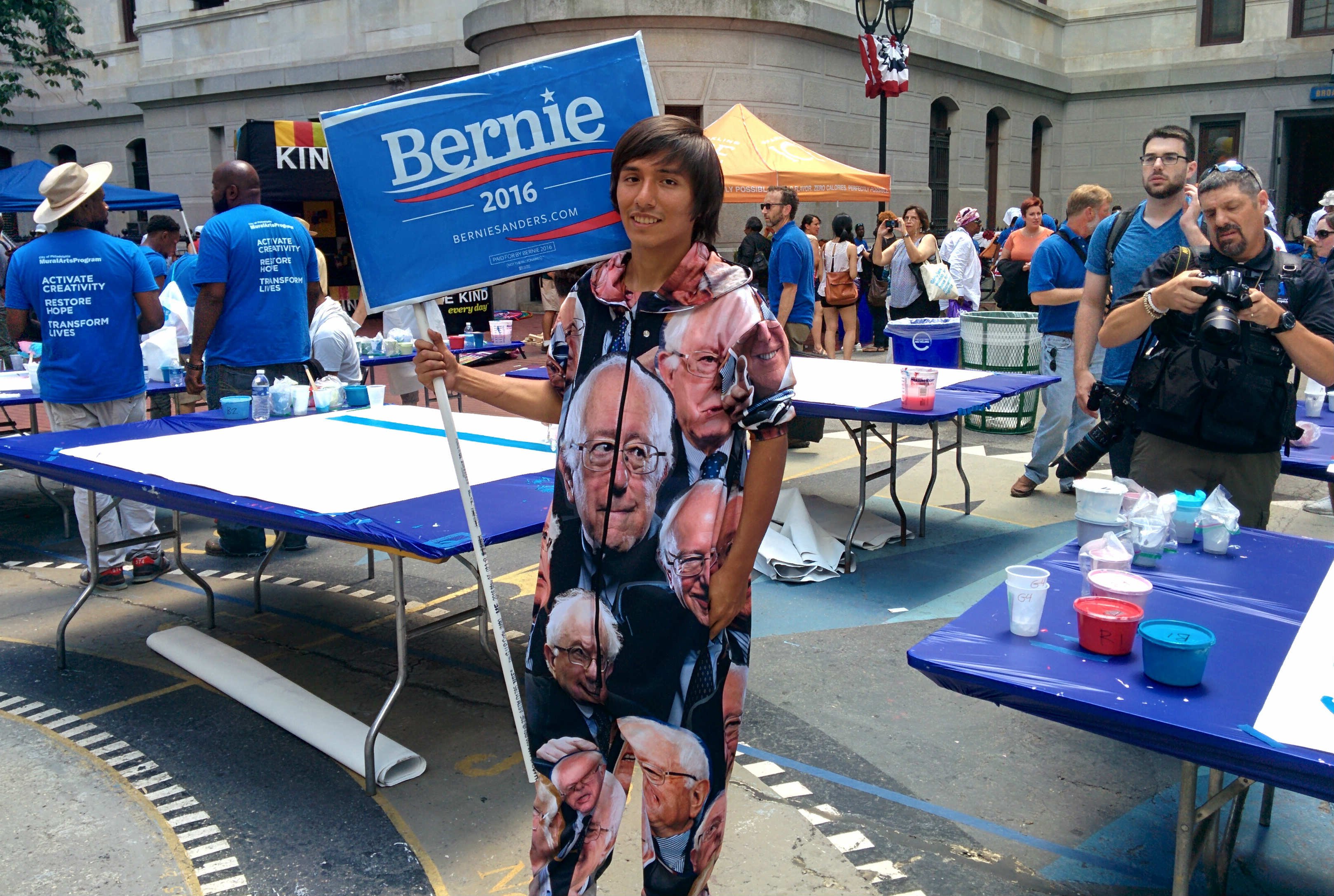 Instead of being discouraged, the 21-year-old man from Westchester, New York, said people needed to continue to march and show up in large numbers.

“Coming together like this sends a powerful message for what we stand for. People are not talking enough about the issues,” he said. “We must show up to stand against the TPP, and stand for the Black Lives Matter movement.”

“It’s crucial that people show up and take ownership of what’s going on,” agreed Michelle Chambers.

The Clinton delegate from Fort Wayne Indiana felt like the rare non-Bernie supporter out and about in Philadelphia. Chambers said she had left the “super air conditioning” of the Wells Fargo Center, where the DNC was being held, to soak up some sun and grab a bite to eat. 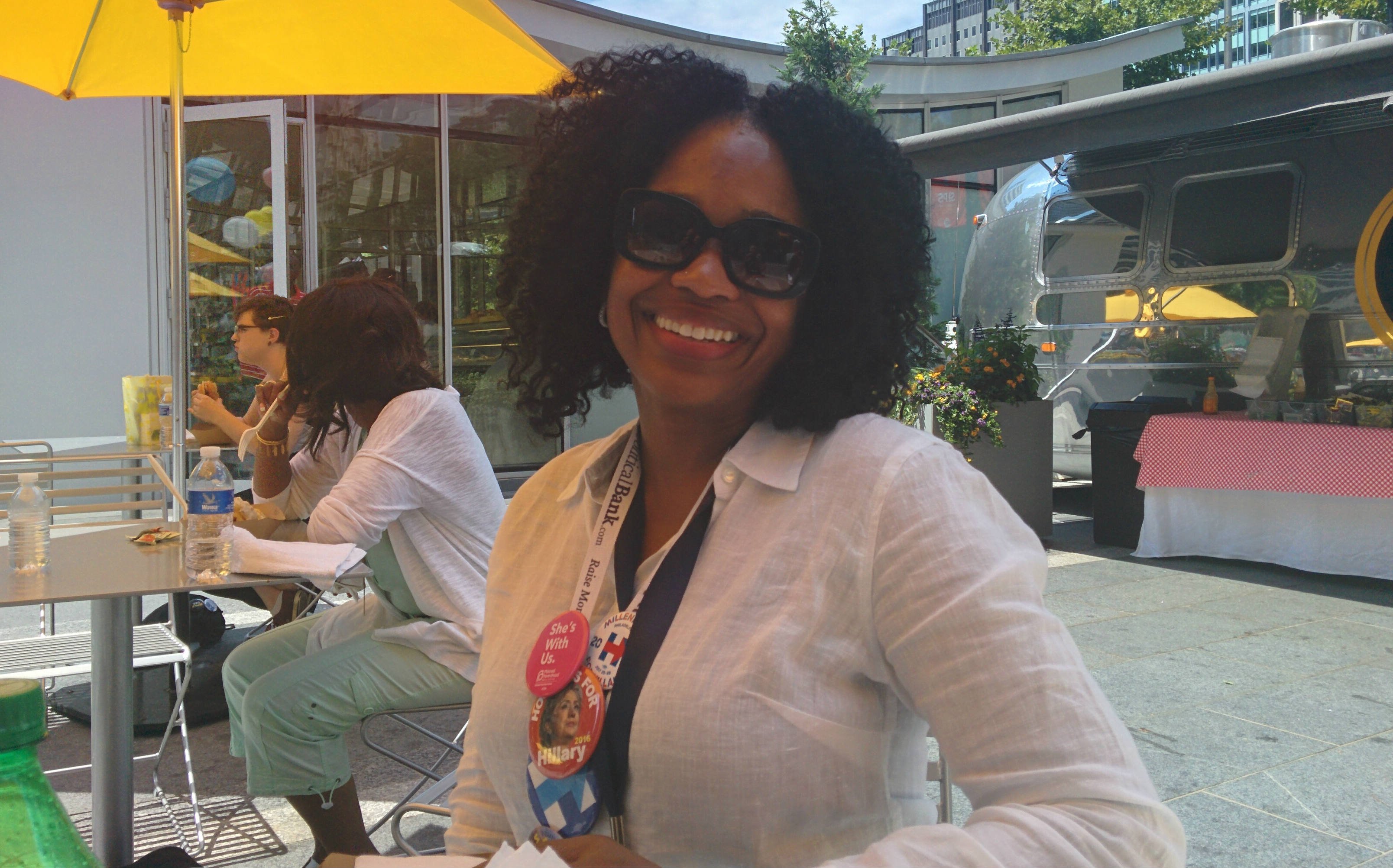 “It’s important to come to big events like this, to understand and support the party and the platform. We are increasingly a nation led by 30-second soundbites, so it’s very important to come here and be informed on what is actually going on,” Chambers said.

After 28 years working in public service, Chambers saw the advocacy of the Bernie supporters as a positive for the nation. “The Bernie campaign was great. It brought millennials in and tapped into a portion of the public that was politically dead.”

The 48-year-old said she had seen a lot of listening from the protesters filling rallies – a point she made even while pro-Bernie speakers continued to loudly deride Hillary Clinton and the Democratic party from a stage across the street.

“Rallies can make a difference if you rally with a purpose. You have gathered a mass of people now do something with them,” advised Chambers. “A protestor must be willing to sit down, talk and listen, then become a change agent. If you don’t it’s all for not.”

Activists at the convention drew inspiration from a wide range of movements throughout human history.

“I’m inspired by the French Revolution and the Boston Tea party. Movements where people rose up and changed an established corrupt system,” said Danielle Chapman. 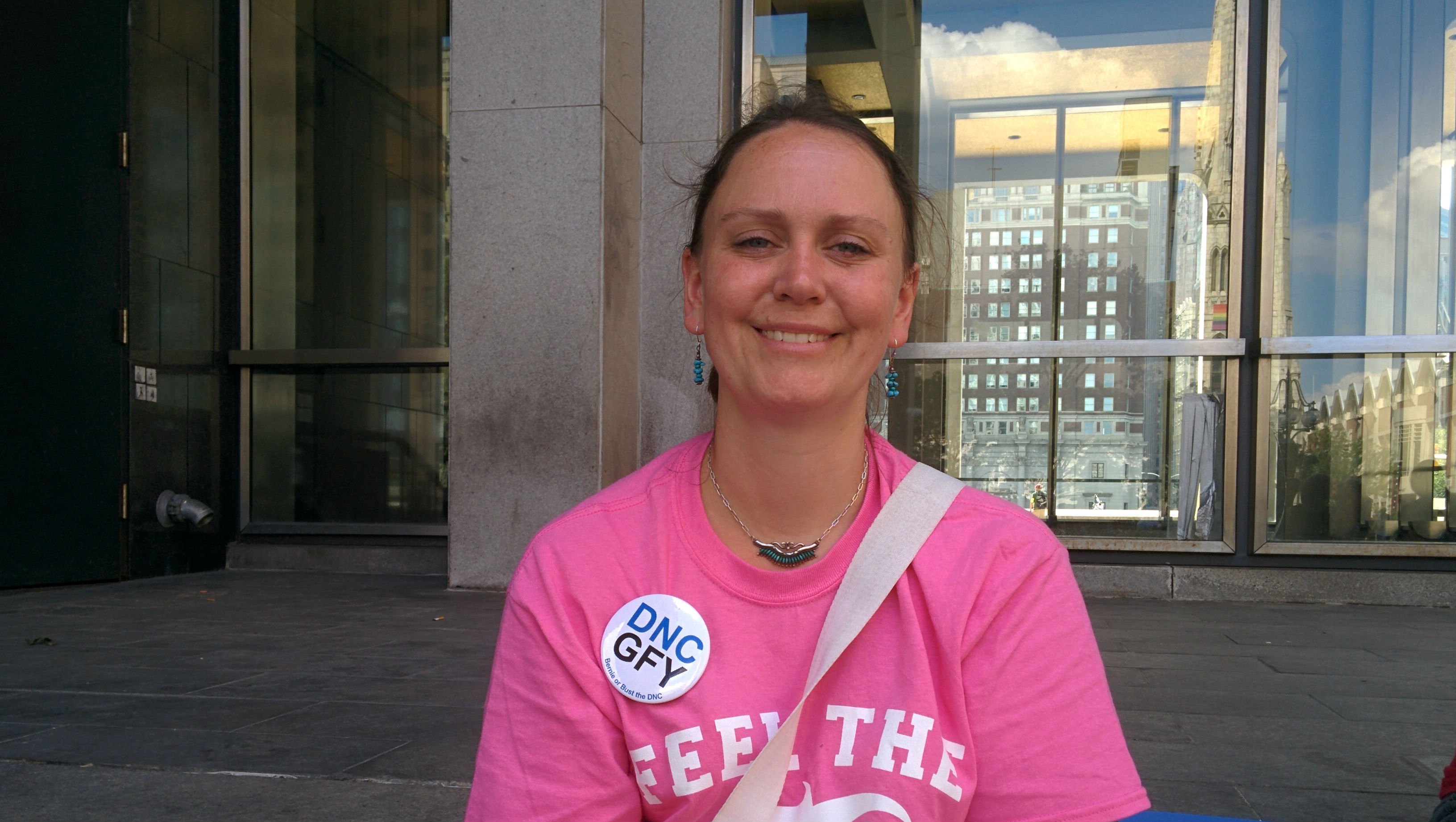 History also gave some lessons to the modern day activists.

“I think of the 1968 DNC protests. They were turned down for an anti-war candidate, but they were ignored because they did not create a sustained focused movement afterward,” Martinez said, imploring the Bernie movement to continue and not give up. “The civil rights movement had a broad movement but still stopped before they had completed everything that needed to be changed.”

Not everyone was as optimistic about the changes that could be brought about by protests.

“You can show up but it’s not enough. You must take more steps than this, than just showing up at the DNC to make real change,” said local Philadelphia resident Teneshia Washington.

After years working at an NGO dedicated to improving prison conditions in the US, Washington added that protest organizers should think about where they are targeting their messages.

“Protests and marches around the City Hall area are nice to see but it’s not the neighborhoods where the problems are,” Washington said. “They need to go to West Philly or other neighborhoods and rally and protest.”

Mixed in with the activists were some locals simply looking to capitalize on the large gathering of people.

“I’m honestly just here to make payroll. I run a startup, zero-emissions food delivery service and we are short this month, so we thought we’d come and sell some fun posters and buttons,” said Andrew Nakkache. 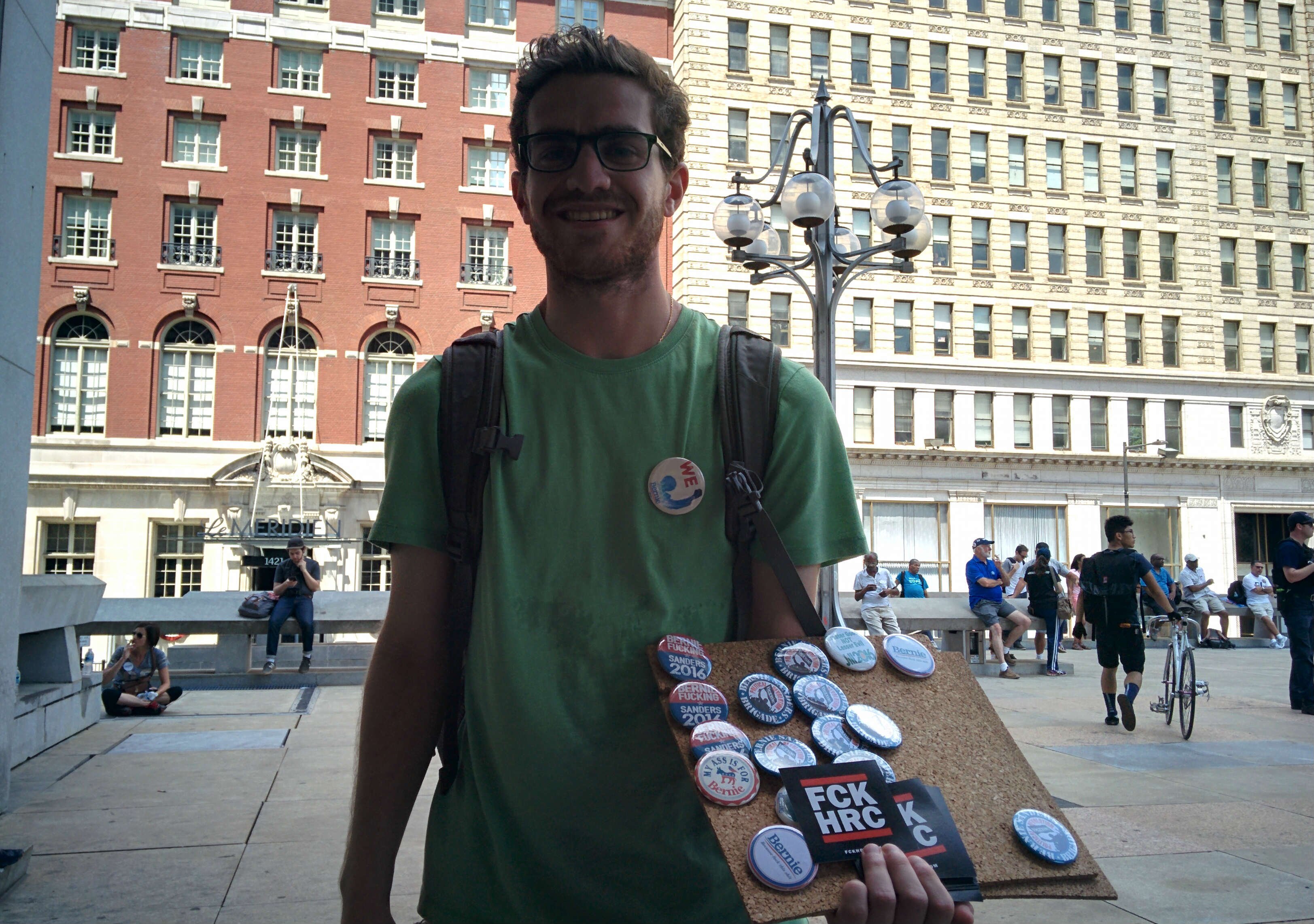 While selling Bernie buttons, he was handing out stickers that read FCK HRC. The stickers direct people to an anti-Hillary Clinton website. Brian admitted the stickers and site were aggressive but that he and his friends had set it up “mostly just to screw with Hillary.”

“I wouldn’t vote for Hillary. And I don’t think I’ll vote at all this year. I might have voted for Bernie but at the moment I have other concerns,” said the Philadelphia based entrepreneur.

Not all local residents were skeptical or cynical.

“The protests and all the people has been positive so far,” said a City Hall security guard who asked not to be named because he wasn’t authorized to speak to the media. The African-American longtime resident of Philadelphia added he was “looking forward to the rest of the protests and what they are doing. I think people gathering like this might help but I haven’t seen any changes yet.”

While most Bernie supporters seemed resigned to the fate of their candidate, they were still motivated to work for a better world.

Even dispirited and “emotionally exhausted,” Mia found a reason to keep going. “I don’t know [if this will change things]. I don’t think so, but if you don’t try then it will definitely never change.”

“Showing up is important because if you don’t make your voice heard then you’ll be silent and get nothing done. Don’t let people silence or shame you. Stand up for what you believe in. United [with others,] you can make a difference,” said Chapman.

It seems the chanting activists who filled the municipal square in front of Philadelphia’s City Hall were right, this is what democracy looks like.