The Global Citizen guide to the Democratic National Convention.

Following on the heels of the RNC in Cleveland, Democrats are gathering Philadelphia to officially nominate Hillary Clinton as their presidential nominee. While some thought this week would be more low key than Donald Trump’s fete, recent events have proven that won’t be the case.

A leak of 10,000 Democratic National Committee emails from the accounts of seven officials on Friday revealed that several in the organization were unhappy with Bernie Sanders’ success. In particular, DNC chairman Debra Wasserman Shultz took heat for her involvement, and Sunday, on the eve of the convention, she resigned her position.

Now Sanders supporters are descending on Philadelphia and, as of Monday afternoon, had already disrupted several speakers.

The platform is an agreed-upon set of positions on particular issues that help guide Democratic candidates through election season and beyond. Candidates are not bound to follow these positions but they do set the tone for the election season.

Democrats are expected to support $15-an-hour minimum wage, better guidelines for federal investigations of criminal justice, a path for legalizing marijuana, Wall Street reform, and calls for an end of the death penalty. It's not expected to have opinions on fracking, the TTP trade deal or Israeli settlements.

Tuesday: President Bill Clinton, along with the mothers of seven men who were killed by police, including Eric Garner, Trayvon Martin, and Michael Brown.

Supporters of Bernie Sanders had already taken to the streets of Philadelphia by Sunday in wake of the DNC email leak. On Monday, in scorching hot temperatures, several large but peaceful protests had broken out but no arrests had been made. Roughly 50 people were given citations for disorderly conduct. People gathered on City Hall and FDR Park.

Protests came to demonstrate on a wide range of issues, including supporting Green Party candidate Jill Stein, marijuana legalization, anti-poverty activists. By some accounts, the protests were already larger than what the RNC experienced in Cleveland.

The first evening of prime-time speakers at the DNC was met with frequent booing, chanting, and jeering by Bernie Sanders supporters. Sen. Al Franken and comedian Sarah Silverman were met with such loud "Bernie" and "Hillary" chants that they stopped speaking. Silverman chastised the crowd by saying, “The the Bernie or Bust people, you’re being ridiculous.” Then, fittingly, Paul Simon came on stage to play "Bridge Over Troubled Water."

Sen. Cory Booker (N.J.) then shouted his way through his speech as people in the audience occasionally chanted “Black Lives Matter.”

Then first lady Michelle Obama came to the stage, and the audience was rapt as she made the case for Hillary Clinton, aruging she was the better role model for the children of America. Read more on her speech here.

Then Bernie Sanders himself took the stage to quell the outburts, but not even he was successful. His supporters booed whenever he mentioned Hillary Clinton's name.

On the second day of the convention, Hillary Clinton became the official Democratic nominee. Glass ceilings were virtually shattered and speakers included former President Bill Clinton, former Secretary of State Madeline Albright, Meryle Streep, and the mothers of black men who died at the hands of law enforcment officers.

Former President Bill Clinton told the story of his life with Hillary from their first meeting each other in law school through both their careers as politicians. He heralded her as a change-maker who “has spent a lifetime making us stronger together.” The speech was humanizing, warm, and brought the whole stadium to their feet.

"When Hillary was first lady, we went to the Beijing Women's Conference. She courageously stood up and spoke out on behalf of human rights and women's rights, inspiring millions to fight for a better future," Albright said.

Sybrina Fulton, the mother of Trayvon Martin, who was shot by a neighborhood watchmen while walking unarmed through his neighborhood in Florida, expressed the depression that all of the mothers felt for being in this position, "I didn’t want this spotlight … but will I do everything I can to focus some of that light on a path out of this darkness."

Lucia McBath, mother of Jordan Davis, who was fatally shot for playing music too loudly in Florida, talked about the hardship of parenting a young black man in today’s society, "I even warned him that because he was a young, black man, he would meet people who didn’t value his life. That is a conversation no parent should ever have to have."

McBath also reminded the convention crowd of the importance of black communities and police working together to keep children safe.

"We’re going to keep building a future where police officers and communities of color work together in mutual respect to keep children, like Jordan, safe.” She also gave the discussion of police brutality a much needed reminder that this is only a problem for a small number of cops, “Because the majority of police officers are good people doing a good job."

Gabby Giffords, the congresswoman from Arizona who was shot in the head during an assassination attempt while she was meeting with constituents in 2011, took the stage. Her message in support of Clinton was that “strong women get things done.”

“How can there be pleasure in saying, ‘You’re fired.’ He’s trying to tell us he cares about the middle class? Give me a break — that’s a bunch of malarky!” to which the crowd stood and cheered. Watch the whole thing here.

VP candidate Tim Kaine delivered a gutsy impersonation of Donald Trump and his penchant to say “believe me,” despite a track record, Kaine argued, that proved Trump should not be trusted. Watch the full speech here.

And finally, President Obama came to the stage to deliver his final DNC address as president. He speech was laced with positive, soaring rhetoric which served as a stark contrast to Trump’s message of fear at the RNC last week.

After his speech, which was met with several standing ovations, Clinton then joined him on the stage and waved to the ecstatic crowd.

The last day of the DNC presented several speakers which gave a more human face to some of the issues that distinguish the DNC from the RNC. An emotional speech by the father of Humayun Khan, a Muslim American soldier who was killed in action, brought some in the audience to tears. Khizr Khan challenged the rhetoric and policies of Trump, which have been criticized for being anti-Mulsim.

“Donald Trump, you’re asking Americans to trust you with their future,” said Khan. “Let me ask you, have you even read the United States Constitution?” As he said this, he pulled a well-worn copy of the constiution from his pocket and held it up.

The big event of the night, of course, was Hillary Clinton's acceptance of the nomination for president, a historic moment for a country which has never seen a woman nominated by a major party before. Clinton's addressed touched on women's rights, climate change, the economy, and human rights for all Americans. Read more on her speech here.

Global Citizen at the DNC

What’s happening inside the walls of the DNC? Global Citizen is there in the middle of the action. Here’s what Global Citizen has gotten up to so far. 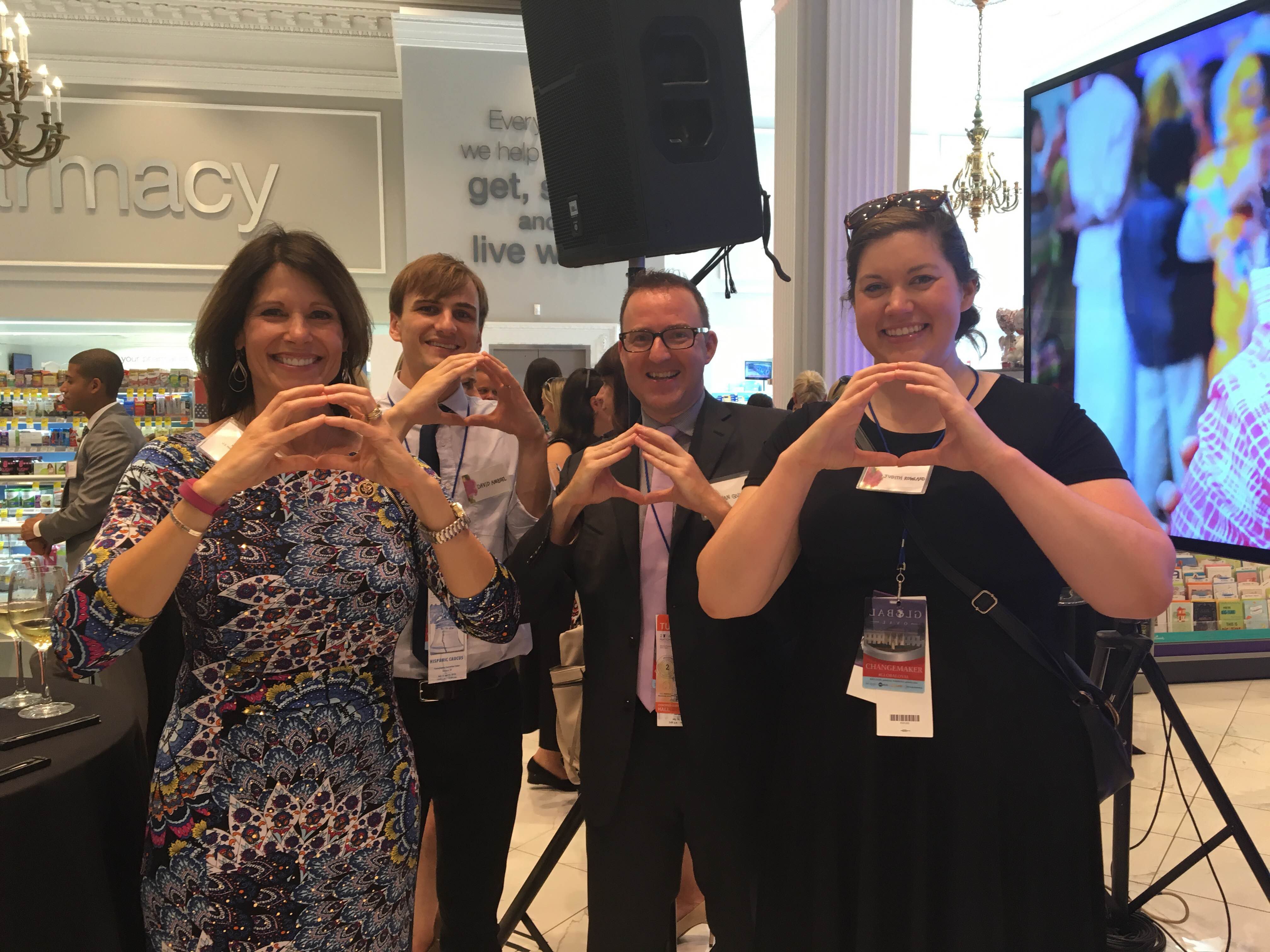 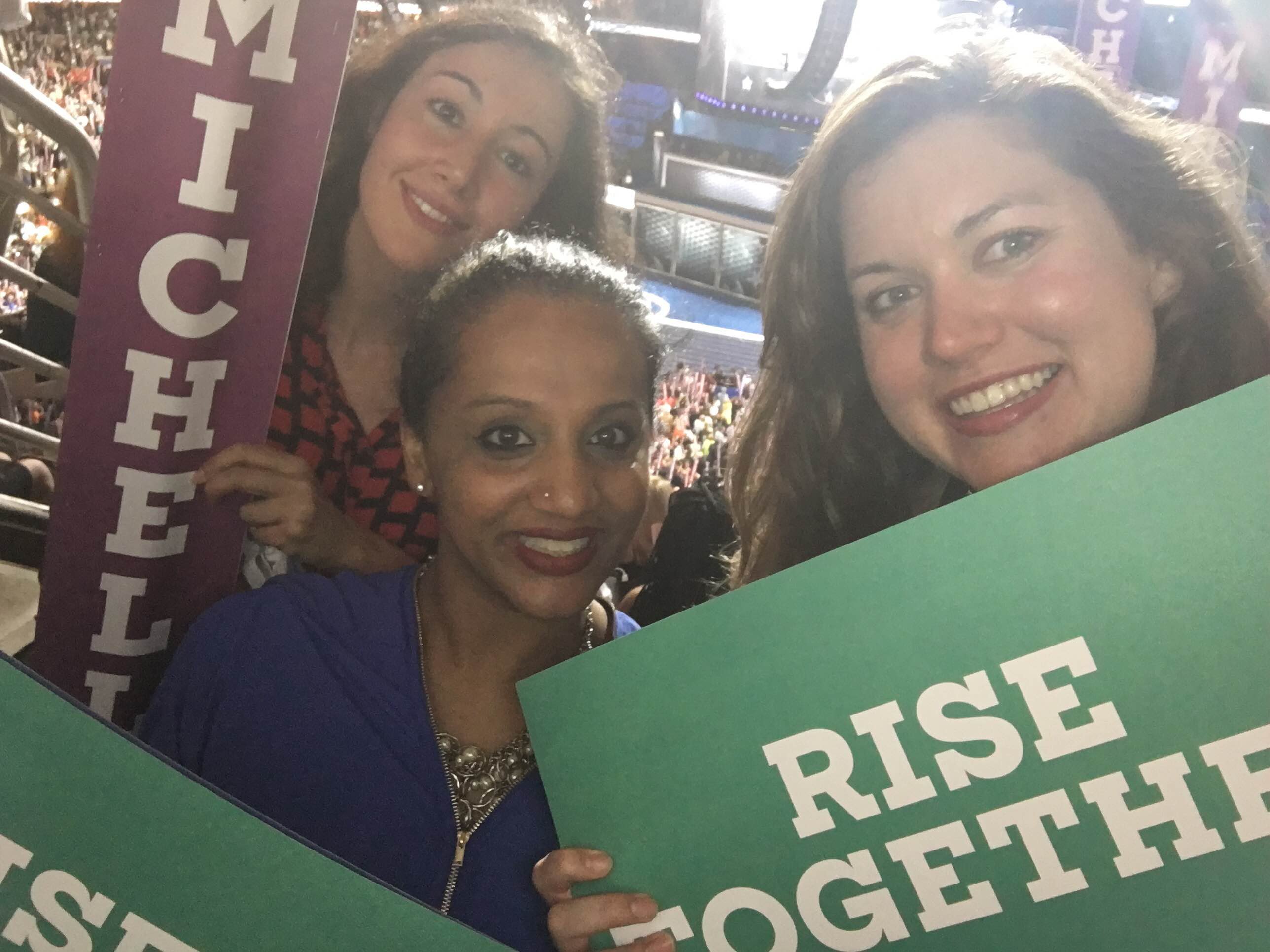 Global Citizens stand with Sen. Bob Casey at a Save the Children and Johnson & Johnson event. 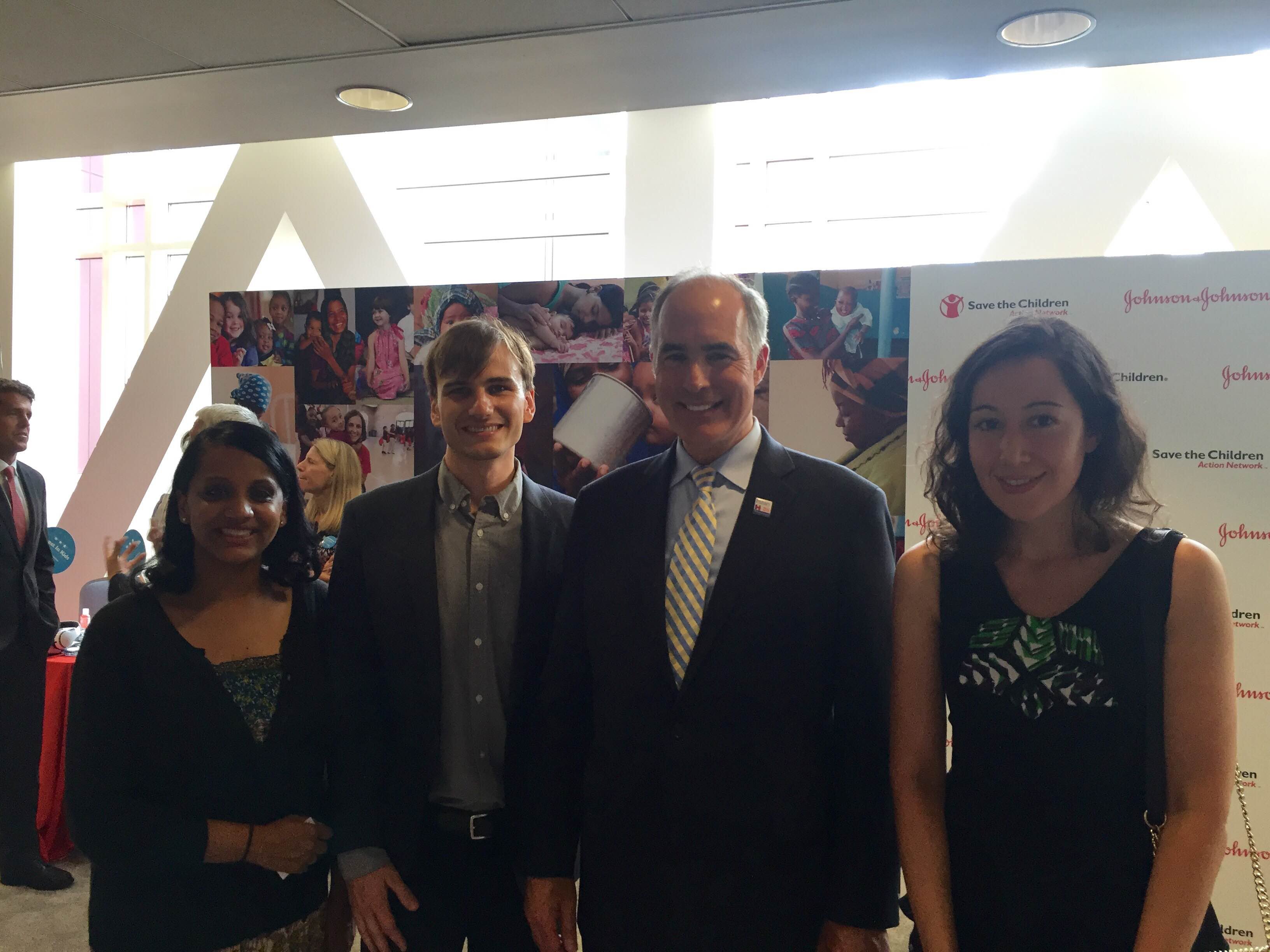 A look at the passes needed to get into the DNC. 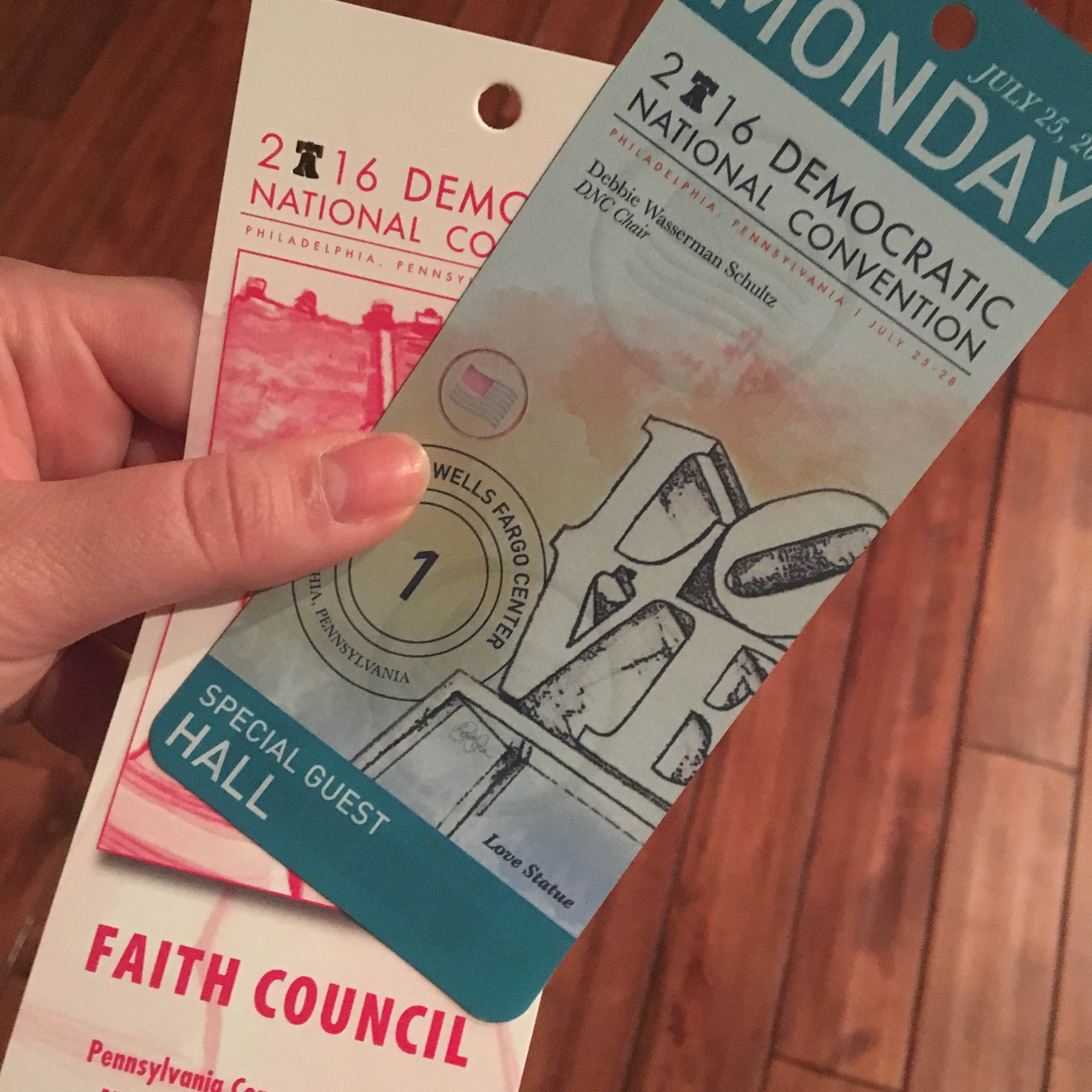 Global Citizens hold up foam fingers at the High 5 for Kids event with partner Johnson & Johnson and Save the Children. 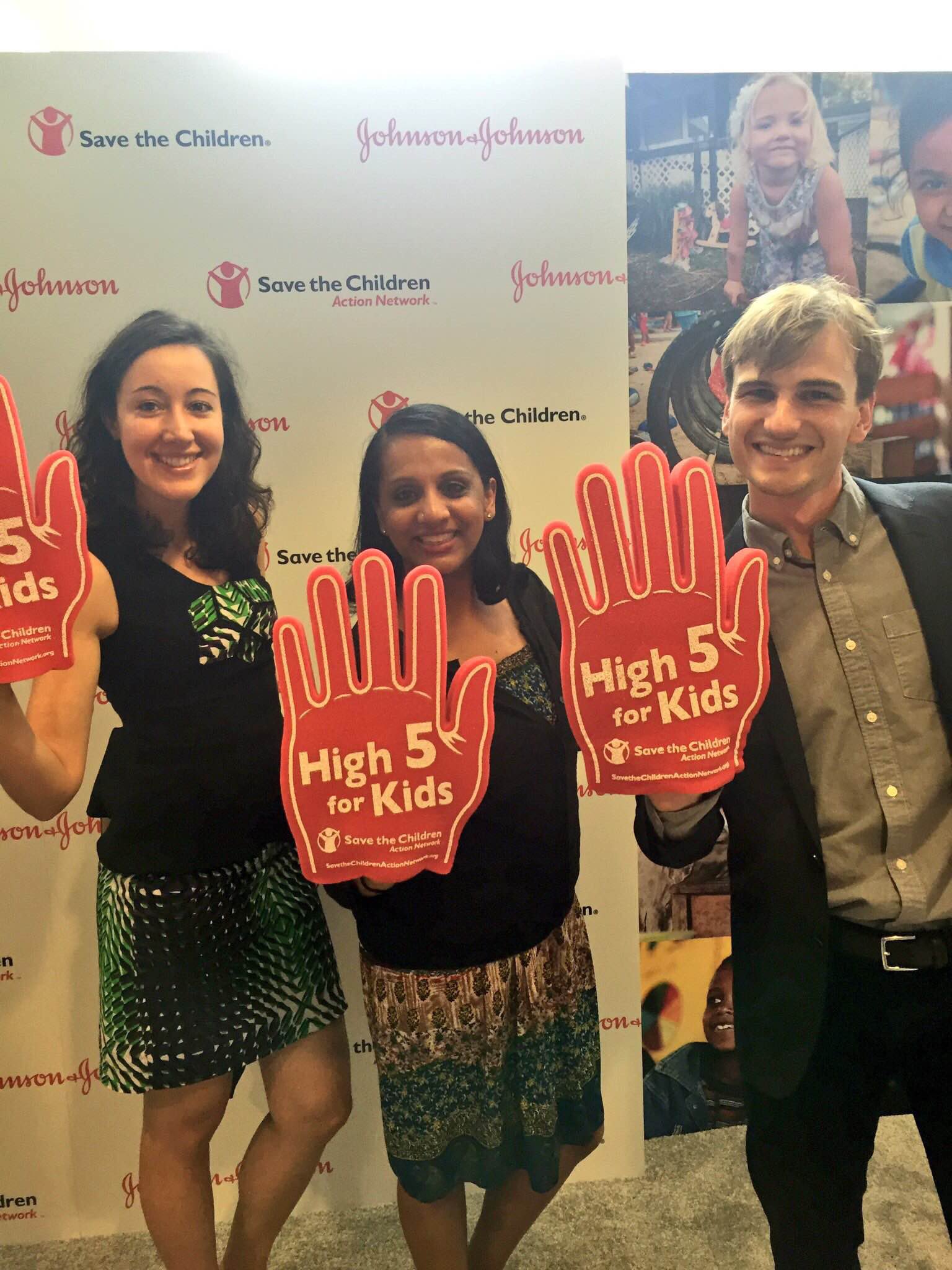 No trip to Philadelphia is complete without a cheesesteak sandwich! 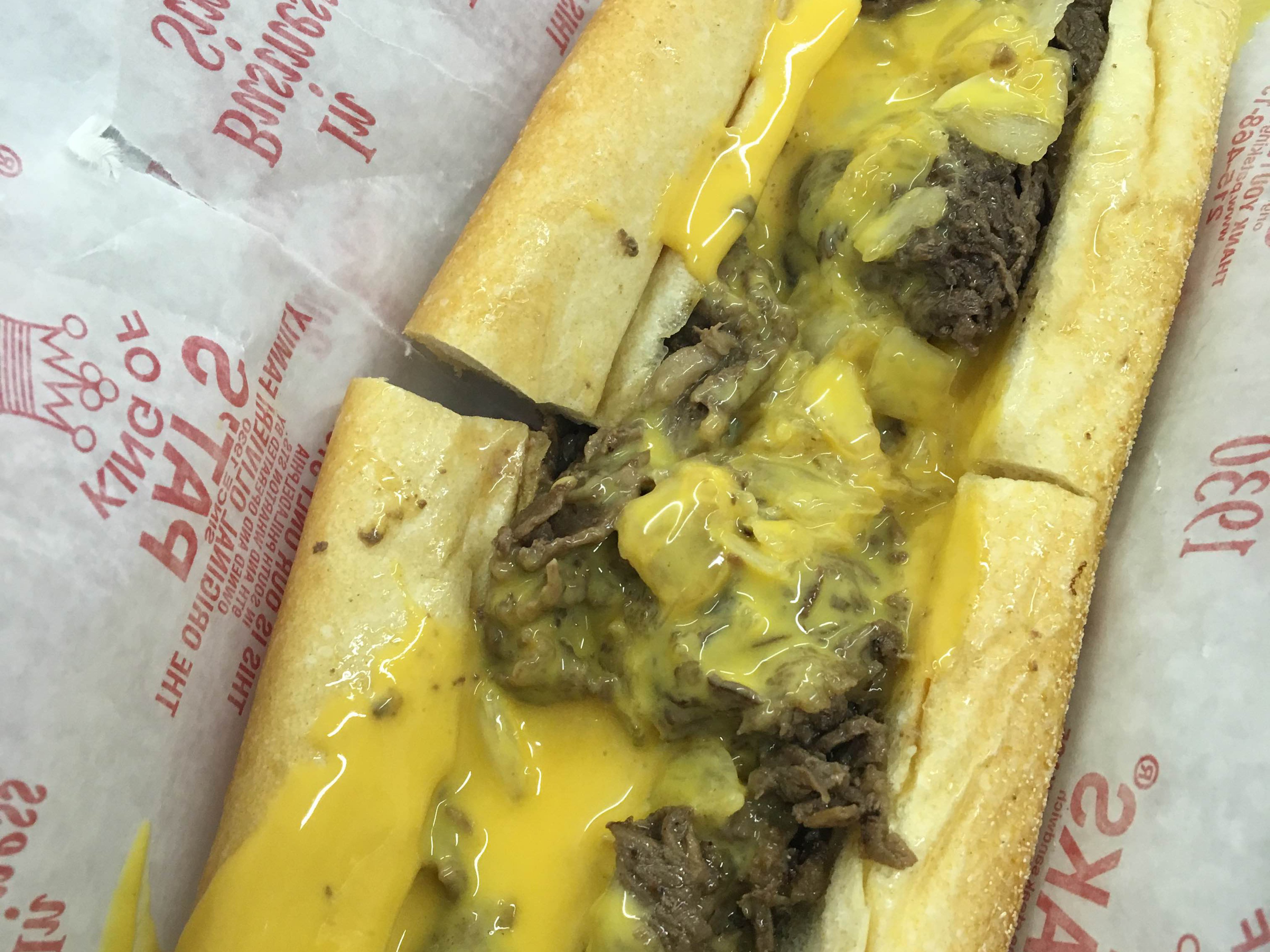