Oil and gas greed prevents Timor-Leste from ending its dependence on Australian Aid.

Timor-Leste has some of the worst poverty indicators in the Asia-Pacfic region. The answer to the problem could be petroleum reserves, but there is a big catch: Australia.

What is the situation in Timor-Leste?

Colonised by Portugal, invaded by Indonesia and having to suffer through decades of violent conflict, the nation of Timor-Leste (aka East Timor) has gained its independence and is now a sovereign nation. Australia and Timor-Leste are very close neighbours (just a one hour flight separates the two countries) and Australian Aid has greatly helped to ensure stability in the country post-conflict.

However, despite aid received from Australia, Timor-Leste's people are struggling. With a population of around 1.2 million people, over two-thirds of Timorese live on less than $2 USD a day. Just some fo the challenges facing the nation are: High maternal mortality rate, poor infrastructure, low-skilled workforce, low agricultural productivity and 50% of children under five years old having growth stunting due to poor nutrition.

Most of Timor-Leste’s economic revenue is petroleum-dependent. Vast oil deposits under the Timor Sea were discovered in the 1970’s and 80’s and since then the Timor Sea is a highly sought after paradise for oil and gas companies.

The Timor-Leste government wants to use its oil revenues to support the country’s long term economic development and poverty reduction but there is a big problem.

In March 2002 - two months before Timor-Leste became an independent nation - Australia withdrew its recognition of the maritime boundary jurisdiction set by the International Court of Justice. A jurisdiction that, put simply, meant drawing a line in the Timor Sea halfway between the two countries.

Why did Australia withdraw?

The sea between Australia and East Timor contains a huge gas field, the Greater Sunrise venture.  It is 140km from East Timor and 450km from Australia and is estimated to be worth billions of dollars in revenue. While Australia had agreed to the boundary in the past, the prospect of an independent Timor-Leste competing for billions in oil makes it seem like it was harder for the nation to stick to the old agreements.

This withdrawal put East Timor in a vulnerable position and by some estimates denied the country international justice on the eve of its long awaited independence. 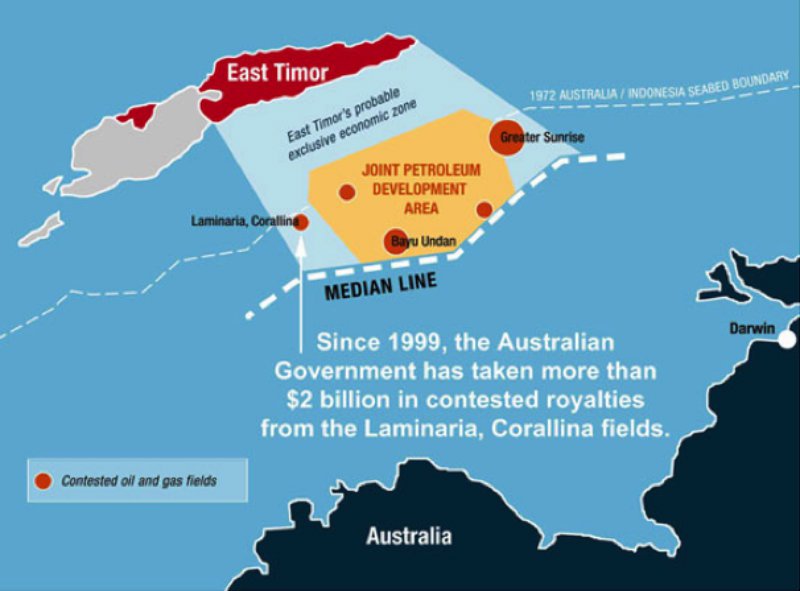 The struggle for equality

There have been treaties upon treaties and much deceit and drama between Australia and East Timor...and both sides are still waiting for an amicable settlement. Timor-Leste is entitled to have permanent maritime boundaries but has never had them. Until there are boundaries between the two neighbors it is hard to envision equal treatment between the two nations.

Timor-Leste presses ahead with challenge to Timor Sea oil and gas treaty.https://t.co/YiWMcpfP1Upic.twitter.com/8mO7lhBMMR

Australia was a signatory to the United Nations Global Goals in September 2015. The Goals are a roadmap to end extreme poverty, halt climate change and fight injustice and lower inequality around the world by 2030. It is in Australia’s national interests to support efforts that reduce poverty.

If Australia can do that in its own backyard, in Timor-Leste, it will set an excellent precedent throughout the world for years to come.

From the Timorese perspective, they are fighting for justice.

We, Australians need to hold our leaders accountable for the promises they made in September 2015. It’s time for Prime Minister Malcom Turnbull to right some wrongs. Give Timor-Leste a fair go and help our nearest neighbours come out of poverty while reducing their reliance on Australian Aid.