Despite Fatwa on Biking, Iranian Women Are Not Giving Up 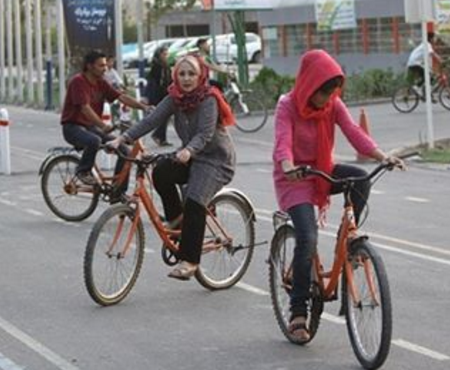 But Iranian women are still cycling.

“It’s our absolute right and we’re not going to give up,” said one female cyclist who posted a video to the My Stealthy Freedom Facebook page, which has become a homepage for Iranian women’s rights activism online.

My Stealthy Freedom was launched as a way for women to show images of themselves not wearing the hijab.

Read More: These Iranian Men Are Wearing Hijabs to Fight for Gender Equality

The woman and her daughter said they immediately went out and rented bicycles when they heard about the fatwa to send a message that, in their words, “We’re not giving up cycling.”

In addition to the videos and images posted to the My Stealthy Freedom page, social media users have been posting to Twitter and Instagram with the hashtag #IranianWomenLoveCycling.

One 25-year-old videotaped herself bicycling through the streets of Iran, wearing a bandana over her face while she discussed her objections to the fatwa.

“Was it really necessary to declare this decree and announce biking of women is a taboo?” she said. “The Iranian people have got used to the idea of seeing women biking with open minds and acceptance. Why [is it that] living a healthy life should be considered...a taboo?”

Read More: These Are the Worst Countries to Be a Woman

“I hope me and all other women who love biking can do sports and live a healthy life in our own homeland with the help and support of the government authorities,” she said.

According to The Independent, the new ban was instituted because bicycling "contravenes women's chastity” because it attracts too much male attention toward women.

The Women's Committee of the National Council of Resistance of Iran called the ban “ridiculous.”

The bicycling law is the latest restriction on women’s rights in Iran as the government has increasingly cracked down on what women wear in public and where they are allowed to go.

Earlier this month Khamenei said that women’s "role and mission" was "motherhood and housekeeping.”