Nobel Prize Winner Calls for an End to 'Impunity' for Rapists

Mukwege founded the Panzi Hospital to help women and girls who had been raped in Congo's conflict. 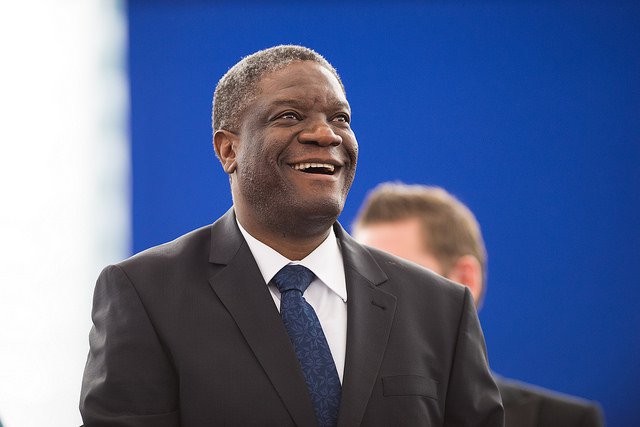 YAOUNDE, Oct 18 (Thomson Reuters Foundation) — The Congolese doctor who won this year's Nobel peace prize has called on the world to end rape as a weapon of war, saying a "system of impunity" still prevails in many of the worst-affected countries.

Denis Mukwege, joint winner of the prize with Nadia Murad, a Yazidi survivor of sexual slavery by Islamic State, urged the world to "draw a clear red line" on sexual violence in conflict.

"Today we can see that unfortunately there is a system of impunity which reigns supreme in many conflict zones concerning many of those who commit sexual violence crimes," he told the Thomson Reuters Foundation.

"I think the world has the power to draw this line, to ensure that the use of rape as a weapon of war is completely prohibited," he said in an interview from Bukavu in eastern Democratic Republic of Congo.

Mukwege, 63, founded the Panzi Hospital in 1999 to help women and girls who had been raped during the conflict in eastern Congo.

He has performed surgery on scores of women after they had been raped by armed men, and campaigned to highlight their plight. He also provides HIV/AIDS treatment as well as free maternal care.

Rape has been a war crime since 1919, but it was not prosecuted until 1997 when small-town Rwandan mayor Jean-Paul Akayesu went on trial at the International Criminal Tribunal for Rwanda for his role in the 1994 genocide.

The physician Denis Mukwege, awarded this year’s Nobel Peace Prize, has spent large parts of his adult life helping the victims of sexual violence in the Democratic Republic of Congo. Dr. Mukwege and his staff have treated thousands of patients who have fallen victim to such assaults. Most of the abuses have been committed in the context of a long-lasting civil war that has cost the lives of more than six million Congolese. Mukwege is the foremost, most unifying symbol, both nationally and internationally, of the struggle to end sexual violence in war and armed conflicts. His basic principle is that “justice is everyone’s business”. He has repeatedly condemned impunity for mass rape and criticised the Congolese government and other countries for not doing enough to stop the use of sexual violence against women as a strategy and weapon of war. Photo Radio Okapi/Archives. . . . #NobelPeacePrize #NobelPrize #Peace #DenisMukwege

The International Criminal Court issued its first rape conviction in 2016 when it held Congo's Jean-Pierre Bemba responsible for a campaign of rape and murder in Central African Republic.

In June 2018, the ICC overturned the conviction on appeal.

Mukwege said the Congolese military justice system had improved, but the government was still failing to help victims of sexual violence and to protect the wider population.

"We live in an area which is in a state of permanent conflict," he said of eastern Congo, where more than 100 armed groups operate.

"These groups use the weapon of rape, destruction, abuse of children, of little girls. We as citizens demand that the government steps up to its responsibility protect its citizens in these zones controlled by armed groups," he said.

More than 400,000 women are raped in Congo every year, and much of the sexual violence is considered to be a by-product of years of fighting.

Experts say Congo has made some progress in combating sexual violence. Several high-level militia and army commanders have been prosecuted in recent years, but the problem remains pervasive.

Mukwege's Panzi Hospital has been the target of threats, and in 2012 his home was invaded by armed men who held his daughters at gunpoint, shot at him and killed his bodyguard. Mukwege said he still received death threats, sometimes several a week.

"What really gives us hope, it is above all the capacity of the women we treat to recover," he said. "Without the strength of these women, it would be practically impossible to continue, because when I see their strength, they encourage me.

"All this gives me hope because there you feel that the future of this country belongs to these women."