"Her demise has left a huge void in Indian politics.” 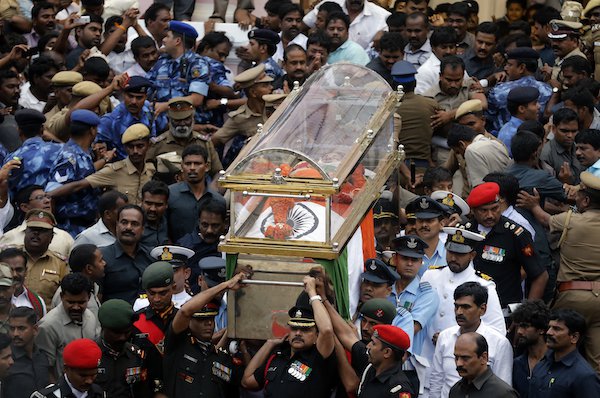 A beloved Indian leader nicknamed both “Mother” and the “Iron Lady” for her benevolent but autocratic style of governing, died unexpectedly Monday, causing an outpouring of displays of grief in the city of Chennai, where she ruled for more than 20 years.

Jayalalithaa Jayaram, 68, served five terms as the chief minister of the southern Indian state of Tamil Nadu and was enormously popular with the state’s 78 million citizens and a somewhat more controversial figure among other politicians, according to The New York Times.

Hundreds of supporters kept vigil outside of the hospital in Chennai where she had been since September. When the news broke that she had suffered cardiac arrest and died, they pushed forward into hospital gates and destroyed food stalls in reaction to the news.

"Her demise has left a huge void in Indian politics," he said.

Jayalalithaa ji’s connect with citizens, concern for welfare of the poor, the women & marginalized will always be a source of inspiration.

Jayaram, whom the public lovingly referred to as “Amma,” the Hindu word for mother, won fans’ affection by creating a network of “Amma canteens” and “Amma pharmacies” where food and medicine were heavily subsidized for the poor, according to the Times.

She also helped lift millions of Indians out of poverty. She handed out laptop computers for students, cows and goats for farmers, and spice grinders for homemakers, according to Al Jazeera. She also embraced alternative energy and water harvesting and reduced the rate of female infanticide. As a state, Tamil Nadu boasted of high literacy rates and low child mortality.

For women throughout the state, in particular, Jayaram was a revered figure, a representation of what women could accomplish.

A sea of supporters at Chennai's #RajajiHall to pay respects to their 'Amma' pic.twitter.com/ytBYr1hVDJ

One woman who always inspired me, the one I loved coz of her bravery n examples she set,RIP #Amma#jayalalithaa condolences to Chennai 😔

Guys,This Is Not Done.
Spread Love,
Spread Prayers,
Spread Peace,
Violence Is NOT A Solution.

Chennai is all shut, but Amma canteens continue to serve food to peoplehttps://t.co/hE0r2saIbMpic.twitter.com/s5g5uq21Dv

The 68-year-old politician came into power in her 30s, after a career as a movie star. Her frequent costar, Maruthur Gopala Ramachandran, had entered politics before her and mentored her.

When he died in 1987, Chennai saw another outpouring of grief in the form of looting, fires, and riots among mourners. Amid the chaos, Jayaram climbed atop the carriage carrying Ramachandran’s remains, signaling her intention to succeed him even though his actual widow was set to inherit his political seat, according to the Times. But his nephew then pulled Jayaram down off the carriage.

The spectacle endeared Jayaram to the public, and she pursued control of the party and within years had become its autocratic leader, demanding displays of devotion from government workers, including having them lay prostrate on the floor in front of her.

“She not only made men fall at her feet, she made it a spectacle,” A. R. Venkatachalapathy, a historian, told the Times. “Women really liked that.”

Jayaram was not singularly altruistic: she was convicted twice for corruption, including once for taking $10 million in “tributes” during her first term, according to the Times. During one corruption investigation, police found more than 10,000 saris and 750 pairs of shoes after raiding her home, according to Al Jazeera.

Read More: This Program Has an Ingenious Way to Keep Girls in School: Let Them Play

But her fans remained loyal.

Jayaram’s “ruthlessness, including her willingness to sanction violence in pursuit of her goals, eventually reversed the traditional view of gender roles, leading the public to see Jayalalithaa as the toughest person in Tamil Nadu politics,” a US diplomatic cable written in 2009 released by Wikileaks read.

The devotion of millions throughout Tamil Nadu is now on full display in Chennai, where mourners have gathered to pay their respects.