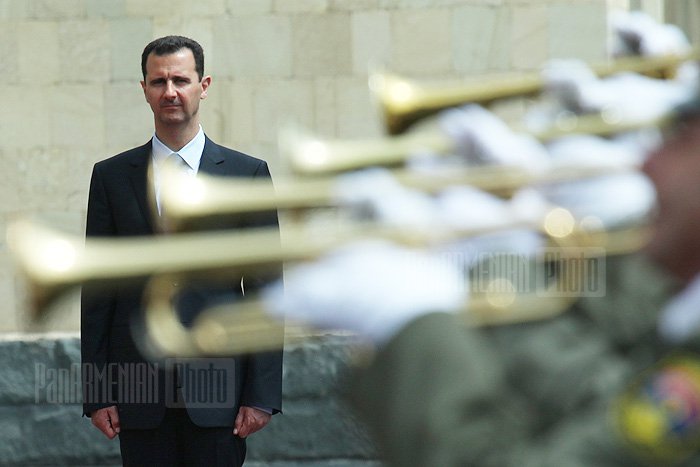 In the speech, Assad, referring to Erdogan, also said “Aleppo will be the grave where all the dreams and hopes of that butcher will be buried.” The Syrian civil war may dramatically escalate in the coming days. “Syrian President Bashar al-Assad signaled Tuesday that his government intends to escalate military efforts to crush the five-year-old uprising against his rule, saying the bloodshed will not end until he has regained control over all areas of Syria lost to the rebellion. His tough words came amid indications that Russia is preparing to reengage in the war in support of Assad, almost three months after it threw its support behind a U.S.-backed cease-fire and announced it was withdrawing most of its military from Syria...Assad’s comments, made in an address to a newly installed parliament in Damascus, suggested that he and his Russian allies are preparing for a full-scale resumption of the war, with Aleppo as their first target.” (WaPo http://wapo.st/25KMD7Q)

Massive displacement in Niger…”The UN High Commission for Refugees (UNHCR) has expressed concern for some 50,000 people, who have been forced to flee a town in Niger after a devastating attack from armed group Boko Haram. Adrian Edwards, UN refugee agency (UNHCR) spokesman, told reporters in Geneva on Tuesday that tens of thousands of people were forced to flee the town of Bosso, in south-eastern Niger, after the armed group attacked a military outpost based over the weekend. Edwards said that many of those fleeing the town were headed towards Toumour, some 30km west of Bosso, living in the open and in precarious conditions.” (Al Jazeera http://bit.ly/25KNjdk)

Big global HIV/AIDS meeting kicks off at the UN…Three days of high level meetings commence today. A who’s who of the global health community is attending the event which is intended to “ focus the world’s attention on the importance of a Fast-Track approach to the AIDS response over the next five years.” Here’s the full schedule (UN http://bit.ly/25KOnha)

Distressing stat of the day: More than 10,000 people have died crossing the Mediterranean to Europe since 2014, the UN said Tuesday, as the EU unveiled fresh plans to stem the migrant flow from Africa. (AFP http://yhoo.it/1ZvUeTV)

For a laugh...Watch Amy Schumer, Will Ferrell and others try to pronounce the name of the global health NGO, JHPIEGO. (People http://bit.ly/25KOoBX)

UN whistleblower Anders Kompass, who exposed the sexual abuse of children by French and African peacekeepers in Central African Republic, is to resign in protest over what he sees as the organisation’s failure to hold its senior officials to account. (IRIN http://bit.ly/1WDRlCq)

Report: Soldiers from the Republic of Congo killed at least 18 people, including women and children, between December 2013 and June 2015 while serving as peacekeepers in the Central African Republic...A grave found near a peacekeeping base in Boali, and exhumed on February 16, 2016, uncovered the remains of 12 people identified as having been detained by the peacekeepers in March 2014. (HRW http://bit.ly/25KPa1D)

Kenya's government has banned all protests against the Electoral Commission, the interior ministry said on Tuesday, after an escalation of violence at the rallies held every Monday since early April. (Reuters http://bit.ly/1ZvUEtt)

At least 18 albino people have been killed in Malawi in a "steep upsurge in killings" since November 2014, and five others have been abducted and remain missing, according to a new Amnesty International report. (AP http://yhoo.it/1OcqdYz)

Concerned over Congolese President Joseph Kabila's apparent attempts to cling to power, U.S. officials are pushing for sanctions against his inner circle but running into opposition from European powers wary of moving too quickly. (Reuters http://bit.ly/24xsPlP)

Kenya was hit by a nationwide blackout on Tuesday, but efforts to restore power were underway, the country's sole electricity distributor said. (Reuters http://bit.ly/1WDQGRI)

Tanzania: Yellow fever certificates, which are supposed to be issued only to people who have been vaccinated against the tropical disease, are on sale on Dar es Salaam streets. (The Citizen http://bit.ly/24xtrrx)

Nepotism of the day: Uganda's veteran leader Yoweri Museveni named a new cabinet on Monday that retained his prime minister and ministers in the key energy and finance jobs while giving the education portfolio to his wife. (Reuters http://bit.ly/24xtjZl)

A car bomb destroyed a police vehicle near a central tourist district in Istanbul on Tuesday morning, instantly killing 11 people and wounding dozens more, Turkish officials said, the latest in a series of deadly attacks in the country. (NYT http://nyti.ms/25KPo8Z)

After securing the southern edge of militant-held Fallujah, seven battalions of Iraqi special forces units have been unable to advance for two days — a delay that commanders say isn't due to counterattacks or difficult terrain, but rather to disagreements about battlefield strategy among the disparate Iraqi forces fighting the Islamic State group. (NYT http://nyti.ms/25KQEsS)

The United Nations is still waiting for Syrian government agreement for an aid convoy to enter the besieged town of Daraya and has requested approval to airlift food into four locations if land routes are unavailable, U.N. officials said on Tuesday. (Reuters http://yhoo.it/1X9jwco)

The United Nations was forced Tuesday to defend its decision to remove the Saudi-led coalition fighting in Yemen from a blacklist of child rights violators after rights groups expressed dismay. (AFP http://yhoo.it/1UdrlM8)

The European Union on Monday proposed expanding a United Nations Security Council mandate for a European naval operation to allow it to crack down on arms smuggling in the high seas off war-torn Libya, though Russia voiced concerns about the idea. (Reuters http://bit.ly/1OcqgDJ)

Suspected militants in Bangladesh hacked an elderly Hindu priest to death on Tuesday, in what police suspected was the latest in a spate of attacks by Islamists on minority groups in the majority-Muslim country. (Reuters http://yhoo.it/1X9jiSx)

The European Union warned Thailand on Tuesday to take "swift and determined action" by next month to improve its fisheries and labor practices or face a serious economic threat of an EU ban on Thai seafood. (AP http://yhoo.it/1Pgx12u)

India has agreed to work toward joining the Paris Agreement on climate change this year, India and the United States said on Tuesday, giving momentum to the international fight to curb global warming. (Reuters http://yhoo.it/1Udqqv2)

North Korea has restarted production of plutonium fuel, a senior State Department official said on Tuesday, showing that it plans to pursue its nuclear weapons program in defiance of international sanctions. (Reuters http://reut.rs/25KQ3Yb)

About 200 family, friends and journalists gathered on the outskirts of Kabul on Tuesday to bury a journalist killed in a militant attack on Sunday while assisting an NPR news crew in southern Afghanistan. (Reuters http://yhoo.it/1Pgwwp7)

Poor families in the Philippines are pushing their children into performing live sex online for paedophiles around the globe in what one senior UNICEF official called a form of "child slavery". (Reuters http://yhoo.it/1tfHMOq)

Brazil's political crisis heated up Tuesday, as authorities reportedly sought the arrests of senior figures behind the push to impeach suspended president Dilma Rousseff, accusing them of obstructing a corruption probe. (AFP http://yhoo.it/1ZvTCxK)

Venezuela's mango season is providing some relief during worsening food shortages that are forcing the poor to skip meals and sparking a rash of lootings. (Reuters http://yhoo.it/24xrxXW)

Haiti's interim president, Jocelerme Privert, said he will stay in office until next year to transfer power to an elected president unless parliament rules otherwise, after the electoral council on Monday scrapped the results of a disputed presidential vote. (Reuters http://yhoo.it/1ZvViap)

The European Union unveiled plans Tuesday to seal agreements with African and Middle East countries in an effort to persuade refugees to stay close to home and to discourage people looking for jobs from heading to Europe. (AP http://yhoo.it/1WDRyWi)

Norway's parliament has agreed on a goal to cut the country's net greenhouse gas emissions to zero by 2030, moving the target forward by 20 years, an official at the national assembly said on Tuesday. (Reuters http://yhoo.it/1tfHnLU)

The National Gallery of Denmark has replaced the word "negro" with "African" in titles and descriptions of artworks in an effort to remove colonial terminology from its collection. (AP http://yhoo.it/1Ocp5Ex)

Child marriage in Nepal: 'A girl is a girl, not a wife' (Guardian http://bit.ly/1tfIM4S)

Five Things You Should Know About the Ongoing Monday Protests in Kenya (Africanist Perspective http://bit.ly/1OcqAT9)

TopicsCitizenshipNewsDAWNS Digest
Brought to you by