The Urgent Message Behind This Weightlifter’s Little Dance 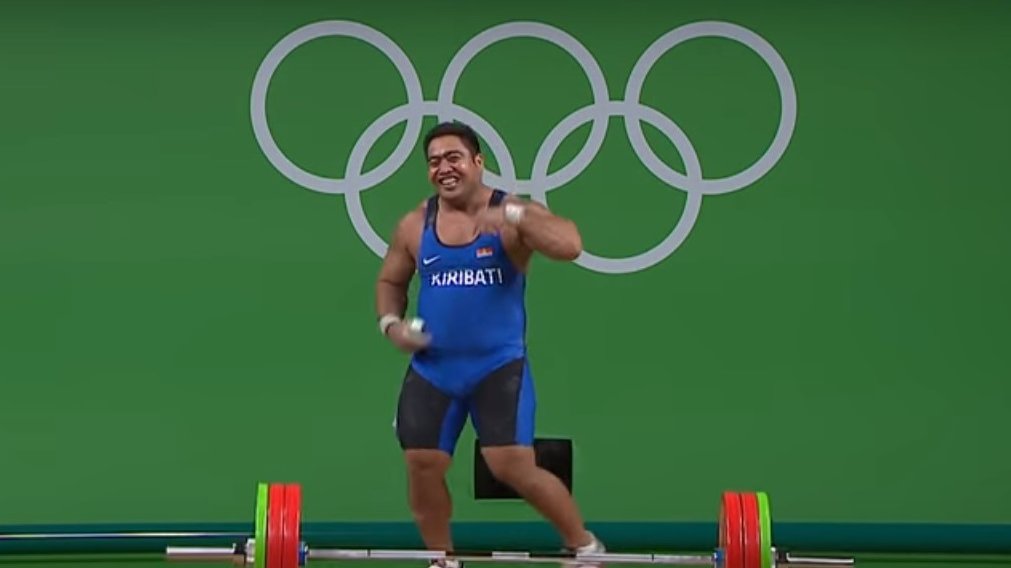 In any Olympic event, the transition from one competitor to the next or from one team to the next is usually quiet and solemn — people walk off a stage, others walk onto a stage.

For weight lifter David Katoatau, of the small Pacific island Kiribati, however, the transition is a bit more exuberant.

After finishing a mammoth lift and letting the barbell thud to the ground, Katoatau hops back and does a little jig, smiling ear to ear. It’s his way of standing out among the competition.

His trademark dance moves have become so beloved that with each lift, the cheers and applause grow louder — in Rio, he gets more cheers than Brazilian athletes. People can’t wait for Katoutau to add a little spark of joy to the day.

But for Katoutau, the dance moves are meant to do more than make the day more fun.

He’s hoping that people will remember the name Kiribati and then learn about what’s happening there: Kiribati is on the frontlines of climate change. And if something doesn’t change soon, it’s likely to disappear all together.

On a map, it looks marooned in the middle of the Pacific Ocean, straddling the equator, far from other countries. Comprising 33 atolls and reef islands, Kiribati has a population of just over 102,000.

Like most island nations, it’s vulnerable to flood and coastal erosion. Cyclones are becoming more extreme and causing more damage. And sea levels are rising, taking away more and more of the island.

The government believes that the entire country could disappear within 30 years. As climate change worsens, the various islands will be gobbled by the ocean.

Everything is made far worse by the country’s severe poverty.

The Guardian dubbed Kiribati the “world’s most scenic slum,” citing lack of sanitation, lack of clean water, lack of food, lack of a stable economy, lack of healthcare, and more.

For Kiribati to survive the onslaught of climate change, the wealthier nations of the world will have to help fortify the islands with structures and systems to keep the rising tides and ferocious storms from doing maximum damage.

The Paris Climate Agreement includes a budget — $100 billion a year through 2020 — for hoping vulnerable countries prepare for climate change.

Of course, the only foolproof solution for the island nation is for climate change to be reined in by reducing emissions globally. As long as sea levels continue to rise and the intensity of storms continues to grow, Kiribati will be at risk.

And that’s why, beneath Katoatau’s sunny exterior, there’s a grave sense of purpose.

“I want people to know more about us so I use weightlifting, and my dancing, to show the world,” he said. “I wrote an open letter to the world last year to tell people about all the homes lost to rising sea levels. I don’t know how many years it will be before it sinks.”