6 Countries Where Poor People Pay The Most For Water

The world’s poorest pay the largest percent of their income for water. 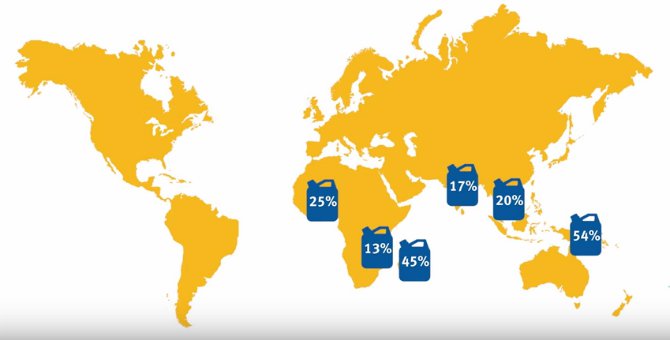 650 million people worldwide still lack access to clean water according to the latest report by WaterAid. The study, “Water: At What Cost? The State of the World’s Water,” was released today to coincide with World Water Day.

It’s often assumed that the poorest people lack water because they can’t afford it, but WaterAid’s report shows that they are already paying for water, and often much more than people residing in wealthier countries.

For a minimum wage earner in a developed nation like the UK, less than 0.1% of their income is spent on water. In contrast, people living in the poorest countries could spend up to half their income to meet their daily minimum water needs.

Poor people living in these countries end up paying the most for their water. Here are six of the most expensive countries to drink water:

In Papua New Guinea, the poorest of the poor pay as much as $2.60 USD, or 54% of their daily earnings, for about 50 liters of water from a delivery service. 50 liters is the minimum daily amount recommended by the World Health Organization to meet basic needs. 60% of the country’s 7.3 million population lives without safe water.

Drinking water shipped in to Banteay Meanchey as 600 families suffer from shortage https://t.co/yXjgAdkl4v#Cambodiapic.twitter.com/paWrCaUExj

In the past 15 years, Cambodia has greatly improved access to safe water. The capital, Phnom Penh, enjoys almost universal water access. But 80% of Cambodia’s population live in rural areas, where the poorest spend up to a staggering 108% of their income on water.

Families in Ethiopia wait to get clean water. The drought is threatening children’s lives & futures. #WorldWaterDaypic.twitter.com/iiIxQOZRCi

Low-ranking government employees in Ethiopia have daily salaries are around $0.92 USD. For them water costs can be up to 15% of their daily income -- only if they carry the water home themselves. The price can go up to 150% of their income if they have the water delivered. Middle-class households who have access to utility company provided water pay almost 20 times less for their water.

Young girls in Madagascar leave school early to get water for their families. #InternationalWomensDay#EarthMonthCApic.twitter.com/Hu2PqeounA

In Madagascar, people will spend as much as 45% of their daily income to get their daily 50 liters of water, leaving many people no choice but to collect water from unsafe rivers. Almost half of the population lacks access to safe water.

For the poorest Indians, water costs $0.71 USD, or 17% of their daily income. India also has the most number of people without access to safe water: 75.8 million.  Each year, 140,000 Indian children die from diarrhea because they lack access to clean water.

We had water delivered in the roof tank of Josy's Ofankor house, cost are 40 Ghana Cedi, or some 10 Euro pic.twitter.com/8c4Q3uAEVk

In Ghana, where piped water supplies are variable or non-existent, poor people pay up to 25% of their salary for water from tanker trucks. Middle-class homeowners who can afford a household water tank pay 3 times less.

Why do the poorest pay such a high price?

Despite progress, inequalities persist even in nations that have made great improvements in access to water. Lack of access to safe water does more than just impact people’s health, it can easily swallow up their income and livelihood. Poor management of water resources have resulted in millions of people getting insufficient or poor quality water.

Those living in extreme poverty often don’t have access to a government-backed water source. They have no choice but to purchase water from unofficial or illegal sources, including water delivery trucks or vendors that inflate prices for the scarce resource.

WaterAid’s report notes that installing and maintaining basic water and toilet facilities can cost as little as $99 USD per person and every $1 invested in water and sanitation returns an average of at least $4 in increased productivity, improved health and more time to work.

As the world celebrates the progress been made in helping an unprecedented amount of people gain access to clean water on World Water Day, WaterAid is reminding governments that the promise of the Global Goal 6 to to reach everyone, everywhere with clean water and access to sanitation by 2030.