The solar eclipse, flooding in India, and more.

While the world seemed to stop Monday when the moon passed over the sun, creating a total solar eclipse in some parts of the United States, there were, in fact, other things going on this week. From deadly flooods in India, to refugees in Italy, and wildfires in France, here are events from around the world that you might have missed.

2) Wildfire in France: Firefighters work to put out a wildfire on a fire in Carnoux-en-Provence, southeastern France, on August 19. Vacationers who were staying near Aubagne were momentarily evacuated on the night of August 19 and residents confined to their homes as a wildfire burned through 200 hectares of vegetation, the Bouches-du-Rhone prefecture said.

3) South American Immigration: Laura Guevara holds her son Emerson, 14 months, outside her one-room home in an impoverished neighborhood on August 19 in San Pedro Sula, Honduras. Honduras is consistently ranked as one of the poorest nations in the Western Hemisphere and has one of the highest murder rates in the world. The poverty and violence have driven immigration to the US although the numbers of U.S.-bound immigrants has dropped greatly during the first months of the Trump presidency. 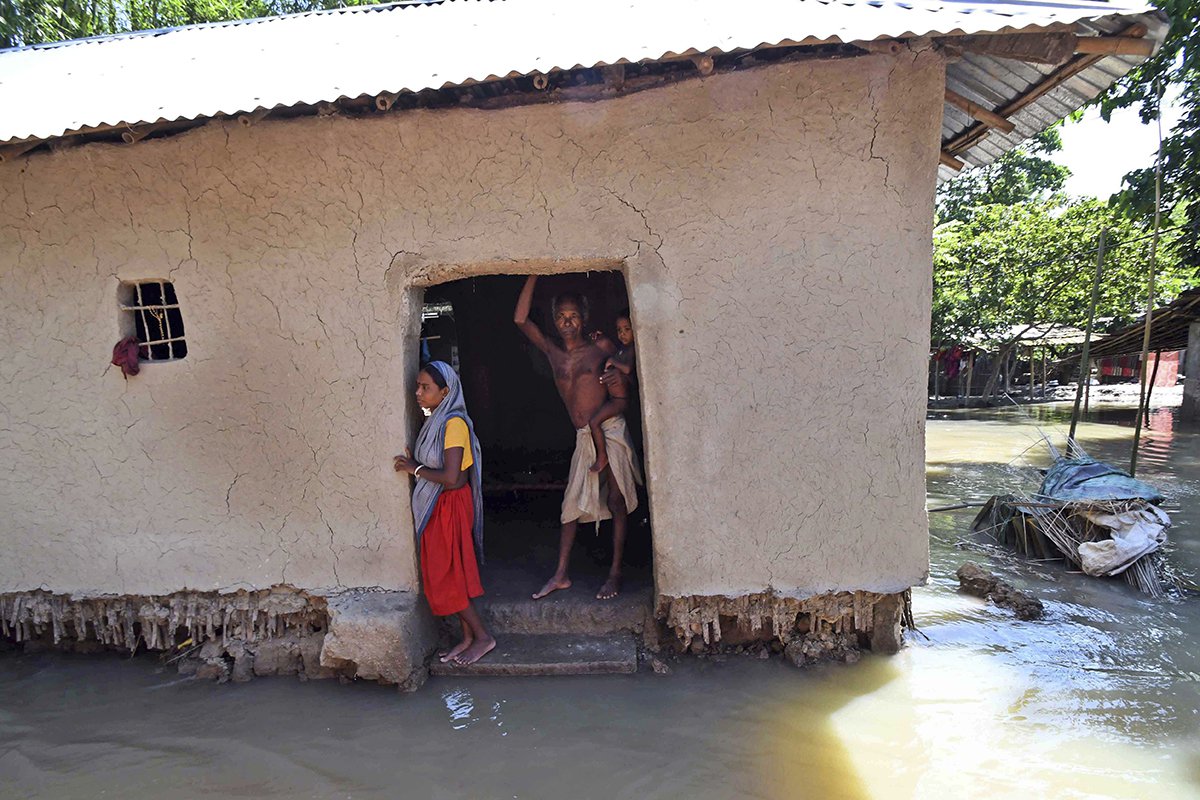 4) Flooding in India: Villagers stand inside their house destroyed by floodwaters at Katihar district, in the eastern Indian state of Bihar, Saturday, Aug. 19. Heavy monsoon rains have unleashed landslides and floods that killed hundreds of people in recent days and displaced millions more across northern India, southern Nepal and Bangladesh. Deadly landslides and flooding are common across South Asia during the summer monsoon season that stretches from June to September. 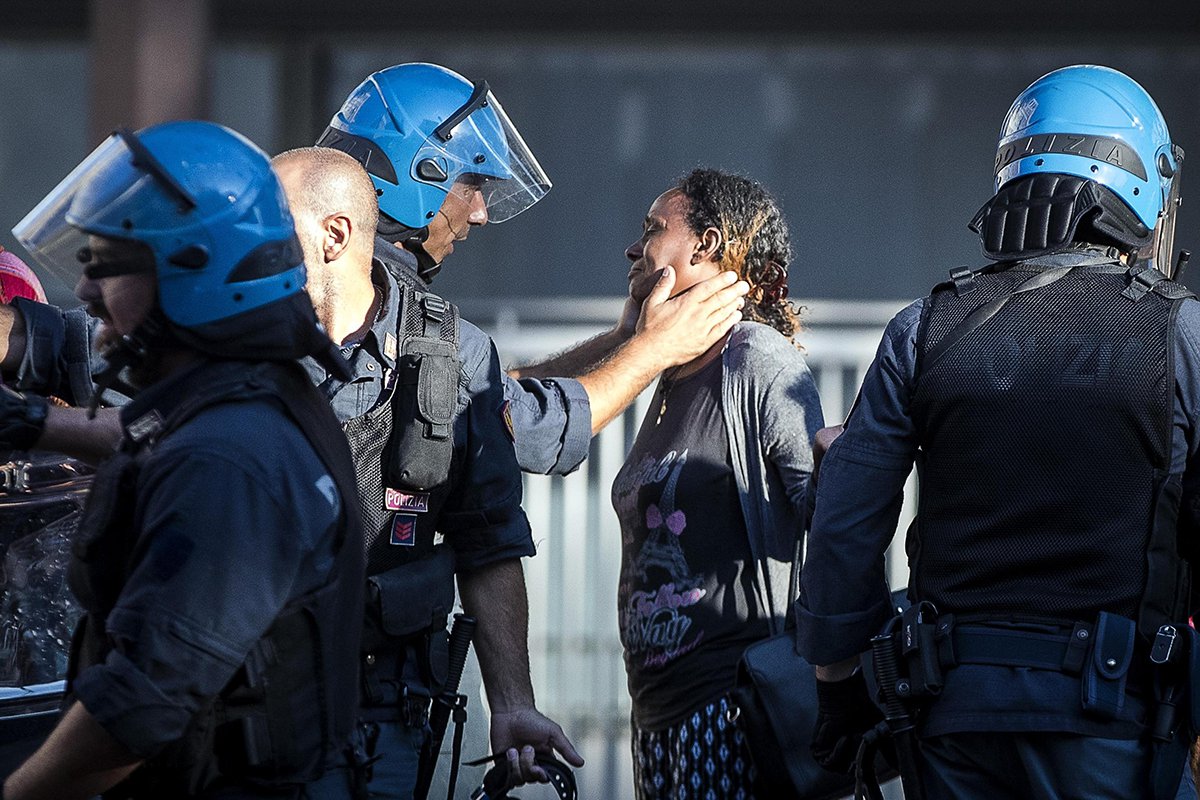 5) Refugees in Italy: An Italian police officer comforts a woman during a migrants protest, in downtown Rome, Thursday, Aug. 24. Protests erupted as police continued an operation to evict some 800 Eritrean and Ethiopian refugees from a building they have occupied since 2013, despite protests from the U.N. refugee agency, UNICEF, and humanitarian organizations.

6) Angola Election: Electoral posters for Isaías Samakuva, the presidential candidate for the National Union for the Total Independence of Angola (UNITA) are seen plastered on the containment walls of a train track in the Viana district in Luanda, on August 22 as a boy slides down. With current president Dos Santos standing down after the election, the ruling MPLA party — which has held power since 1975 — is expected to win again and install his chosen successor, Joao Lourenco, as head of state.

7) Solar Eclipse: Convention goers step outside of the Marriott Resort and Spa at Grande Dunes to catch a glimpse of the solar eclipse August 21 in Myrtle Beach, South Carolina. Myrtle Beach was supposed to see 99% coverage of the sun by the moon but heavy cloud cover prevented people from seeing the moment of most coverage. 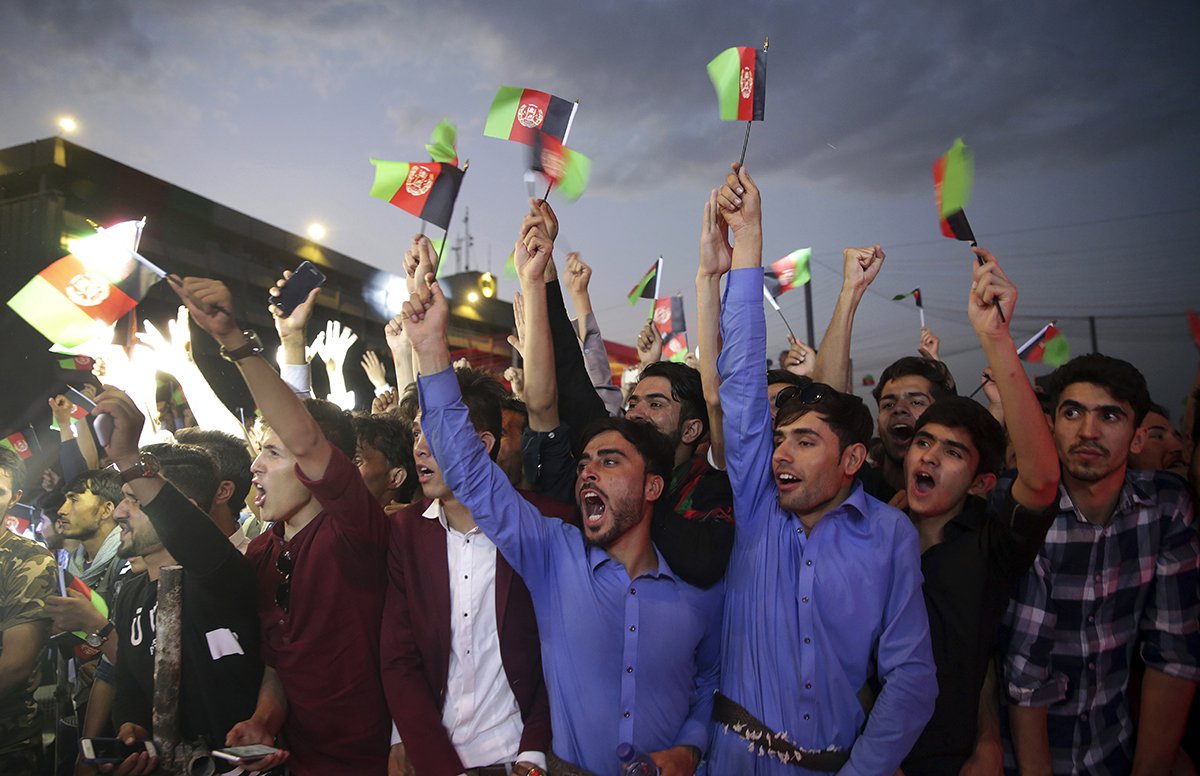 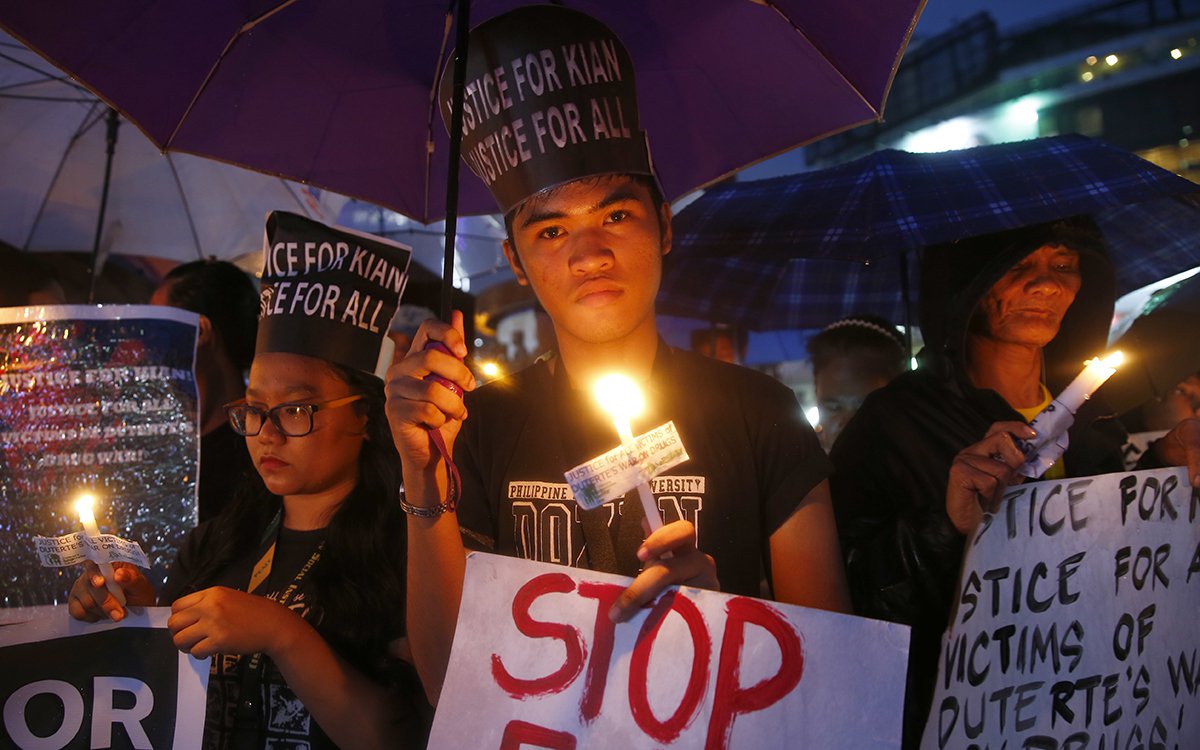 9) Philippines Drug Violence: Protesters display placards and light candles during a rally to denounce the killing of Kian Loyd delos Santos, a 17-year-old student by police, Friday, Aug. 25 in Quezon city northeast of Manila, Philippines. Murder complaints were filed Friday against Philippine police officers in connection with the killing of a teenager that has sparked an outcry against the president's anti-drug crackdown, which has left thousands dead.

10) Montenegro Economy: A fisherman checks his catch in the Bay of Kotor near the coastal town of Bijela on August 25.

11) Thailand Monk: A Buddhist monk sits on the ground in between two vehicular overpasses as he waits to receive alms in northern Bangkok on August 25.

12) Syrian Refugees: A displaced child from the Islamic State (IS) group's Syrian stronghold of Raqa, drinks water as he head to attend the first day of the new school year at a camp for internally displaced people in Ain Issa on August 22. 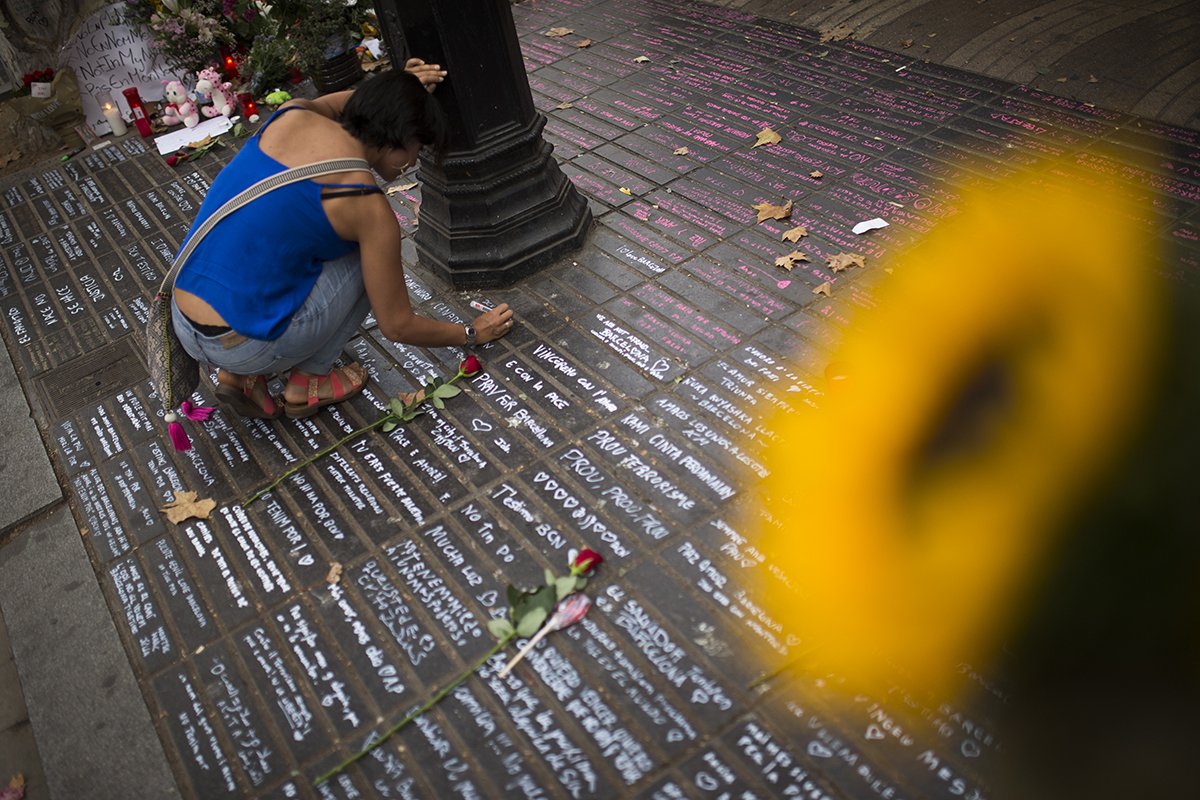 14) Terror in Spain Aftermath: A woman writes a message on the ground as a memorial tribute after an attack that left many killed and wounded in Barcelona, Spain, Wednesday, Aug. 23. Police in northeastern Spain said Wednesday they have found a belt charged with real explosives in a house used by the Barcelona attacks extremist cell.

TopicsThe week in photosPhotos from around the worldPhotos of the week