For those that don’t know too much about The Commonwealth, it’s a network of countries that represents 2.2 billion people across 52 nations. With roots back to British Colonialism, the Commonwealth is now a voluntary network of countries that look to promote democracy, rule of law, human rights, good governance and social and economic development. And with 60% of its population under 30, now more than ever, it can be a relevant and unstoppable movement in delivering global, social progress.

Every two years, the Chairship of the Commonwealth changes from member to member, with the UK due to take over from Malta in 2018. The Maltese Prime Minister, Joseph Muscat, has used the last two years as Chair to, among other things, champion the eradication of polio. The disease that once ravaged the whole world has been reduced to just a handful of cases this year. If it were not for the leadership of the Commonwealth, eradication would still be but a dream.

The UK is already a leader in economic and sustainable development. Being the only G7 country to give at least 0.7% of its gross national income to international aid and development, it is transforming lives around the world everyday. Their Chairship of the Commonwealth is a critical moment for the world’s poorest and offers a unique opportunity to help implement and deliver the Global Goals, as mentioned by Baroness Anelay, UK Minister of State for the Commonwealth, below.

There is much still to be done. Despite incredible progress, diseases like polio and malaria still wreak havoc across the Commonwealth, and indeed, the world. The collective power of the Commonwealth means that we can make tangible plans to curb these debilitating, and in some cases deadly, diseases.

By the same token, the only way we will end extreme poverty in all forms is by prioritizing the rights and needs of girls and women across the world. For too long, the efforts to ensure gender equality have fallen short, even among the Commonwealth nations. To this day, all Commonwealth member countries have at least one law on the books that discriminates against girls and women, simply because of their gender.

At least 6 Commonwealth countries do not have legislation on domestic violence, while 15 Commonwealth countries still have exemptions that permit marital rape ensuring men only face criminal charges for raping their wives in very limited circumstances. Other barriers women face include laws and practices affecting their right to work, financial inclusion, inheriting property and protection from harmful practices like child marriage. The Commonwealth can be a force for good in this world provided they first get their own house in order.

Since world leaders agreed on the Global Goals for Sustainable Development two years ago, the world finally has a roadmap to the end of extreme poverty. But since that historical meeting the implementation of these Goals has been lacklustre, action plans have become stagnant and the momentum that surrounded the meeting has somewhat subsided. Now is the time to act. 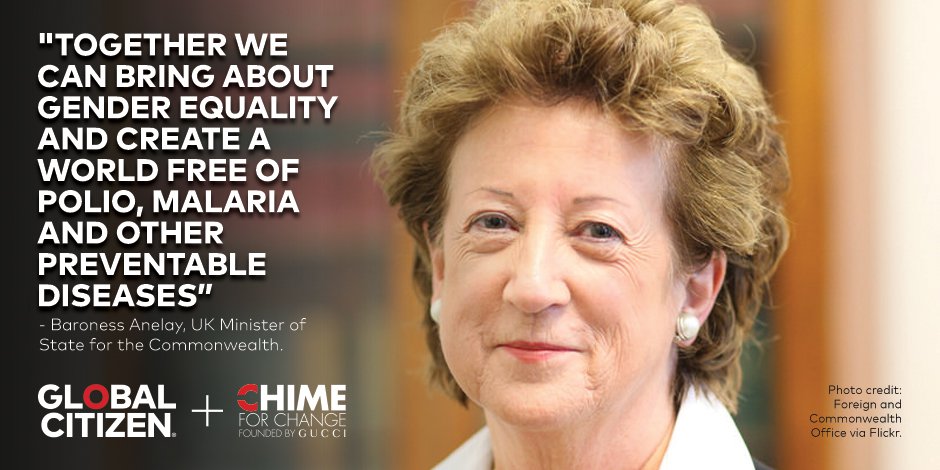 Whatever your gender, and wherever you were born, you deserve a fair chance to live a healthy life of opportunity. The lives of women and girls, and children vulnerable to the devastation of polio and malaria cannot be forgotten. We stand with Baroness Anelay when she says, “Let’s prepare ourselves to tackle some of the world’s great challenges. Together we can bring about gender equality, we can create a world free of polio, malaria and other preventable diseases.”

The Commonwealth Can and Must Deliver the Global Goals