This article was contributed in support of the CLTS Foundation., it was originally posted here.

In an interview to Dr. Kamal Kar and Amit Sengupta, the Mission Director of Swachh Bharat Mission, Chhattisgarh, Dr. M. Geetha talks on how her state is on a mission mode and creating a trailblazer effect on tackling open defecation by creating an enabling environment in the state.

Amit Sengupta: As the Mission Director of Swachh Bharat Mission, Chhattisgarh, how do you see the progress of SBM in your state?

Dr. M. Geetha: We began the Swachh Bharat Mission in the state on 2nd October 2014 and at that time there were only 20 open defecation free villages throughout the state. Today, as we talk, there are 1644 ODF villages in the state. We don’t give upfront incentives to the households for construction of toilets. There is flexibility in the policy and often it is upto the Village Water and Sanitation Committee to decide. We are working on this approach to tackle the problem of open defecation.

We have made tremendous progress in the last almost one and a half years. We feel confident that we have followed a pattern. We have to understand that the communities are not homogeneous mix. They are a heterogeneous group of people of different caste, creed and ethnicity. Often, different dynamics play a crucial factor while dealing with the communities. We have to be aware of those dynamics.

Amit Sengupta: Recently, some new ODF Blocks has made headlines…

Dr. M. Geetha: Yes. Tow ODF Blocks – Ambagarh Chowki and Churya in the district of Rajnandgaon have been declared as open defecation free. We have not just focused on rural sanitation in these two blocks. We have moved towards and incorporated urban sanitation as well. The efforts take a lot of time and we just cannot jump from one stage to the other since we have to follow a pattern.

When communities come together it unites them towards a common goal and vision. It binds them for a common cause and they are able to see the benefits of working towards that common goal. During those exercises and community participation and triggering, natural leaders emerge and lead from the frontlines of the grassroot movement. Bringing the community together ensures the sustainability of the project and sustainability of the open defecation free status. 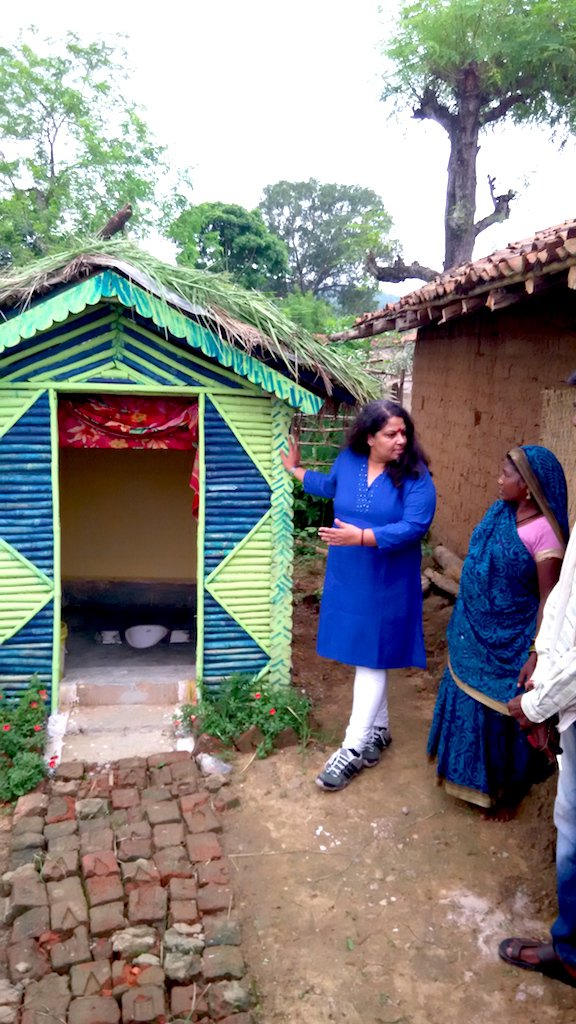 Geetha interacting with one of the community members in Chhattisgarh
Image: CLTS Foundation

Dr. M. Geetha: We also insist that, to ensure this behavioral change, while the state has suggested that while we could give some incentives to families and communities. The state of Chhattisgarh has focused on the communities rather than the individuals. As a result its not family, but a set of families in the Gram, village or in the Panchayats, which are important. Even the incentives, it comes later. Once the community achieved the status, the money that comes in, which we call as incentive, is then utilized for a community purpose.

Dr. Kamal Kar: So the efficiency of utilization goes many times more?

Dr. M. Geetha: Absolutely, and it is also about, the neighbors supporting the people who are not well of.

Dr. Kamal Kar: So you meant to say - total solidarity?

Dr. M. Geetha: Absolutely. I think it is the solidarity that is being built through the communities, and mission is able to achieve that once the community is triggered and brought to the notion that, sanitation and safe sanitation is towards better life.

Amit Sengupta: What do you think are the advantages of the community-led total sanitation approach that your state is implementing?

Dr. M. Geetha: As I was talking about the monitoring and constant interaction with the machinery, we want to engage the community. It’s not easy to break long existing taboos. We have experienced that sustainability becomes questionable when the community is not involved. Once they are onboard, they take ownership of the process and it becomes easier for us to sustain the status of an ODF village or unit.

It’s all about building and empowering the community. We are more hopeful now.

Amit Sengupta: How do you plan to tackle the problem of dysfunctional toilets?

Dr. M. Geetha: Dysfunctional toilets are not just a problem of Chhattisgarh. They are there in every state. There may be difficulties as we go ahead but we have got to move ahead. We continue to support our panchayats in tackling this problem. We have told them that they can try and get funds allocated under the 14th Finance Commission to identify and support people of economically weaker sections to rebuild or repair their toilets.

The district of Rajnandgaon has taken their own initiatives in improving their dysfunctional toilets. Surguja district has declared their two blocks as ODF. Bilaspur district is showing tremendous progress as well. So, overall we are improving the status of lack of toilets and sanitation. 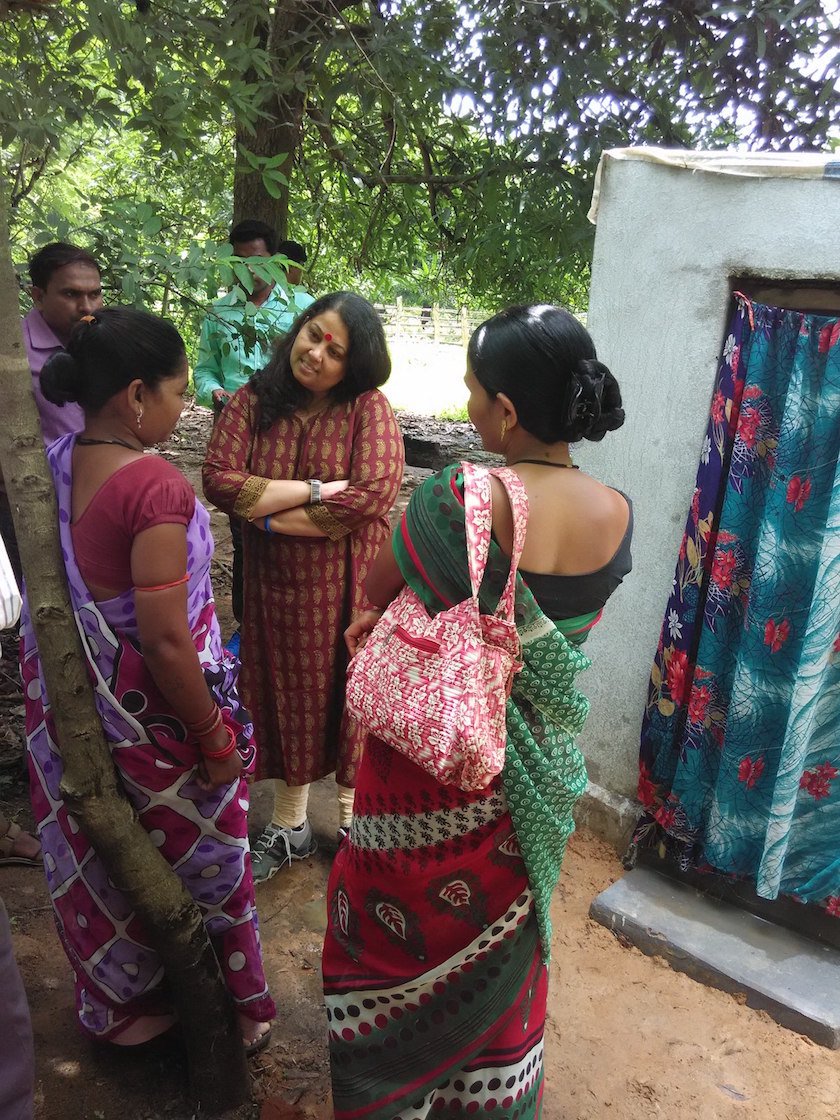 Geetha with the community in Chhattisgarh
Image: CLTS Foundation

Dr. Kamal Kar: Geetha, Chhattisgarh has got 27 districts. Do you think that in the next couple of years with the great innovative action, I mean the kind of initiative that you have started, do you think that in next the 1 and 1 ½ years, this state would become one of the leading state in terms of showing this as an example for the whole country by achieving, very close to 100% ODF status?

Dr. M. Geetha: We are very optimistic. We feel that, instead of talking about individuals, and perhaps talking only of certain villages or certain blocks or certain districts, we are talking about the state as a whole. We are trying to trigger communities and we are going through all the methods possible, to achieve, you know community empowerment. We have provided some flexibility to the districts, to have their own strategies and the state has taken a pledge that it will follow the Community-Led-Total-Sanitation method. Once the state has pledged towards this then the districts are aware of it and we are all working towards this goal.

The state has also taken a stand that we should work towards empowering communities completely towards ODF by December 2018 as an outcome, and we shall work towards Dec 2018 and not wait for 2019, and work towards that through the communities.

Amit Sengupta: Which District do you think will attain the status of the first ODF District in Chhattisgarh?

Dr. M. Geetha: We are on a mission mode and attain the status as fast as possible. We have to ensure the coverage of sanitation from one village to another. We have not hired ‘motivators’ but what we are sending is a particular team of ‘CLTS practitioners’. These teams also monitor whether there is a follow-up after triggering in the community or not.

I think the district of Mungeli will attain the status of the first ODF District in Chhattisgarh. The district has launched a campaign called ‘Sankalp Swachh Mungeli’. It’s a district of 3 Blocks and 375 GPs and hopefully it will show the pathway to similar other districts in the next two-three years.