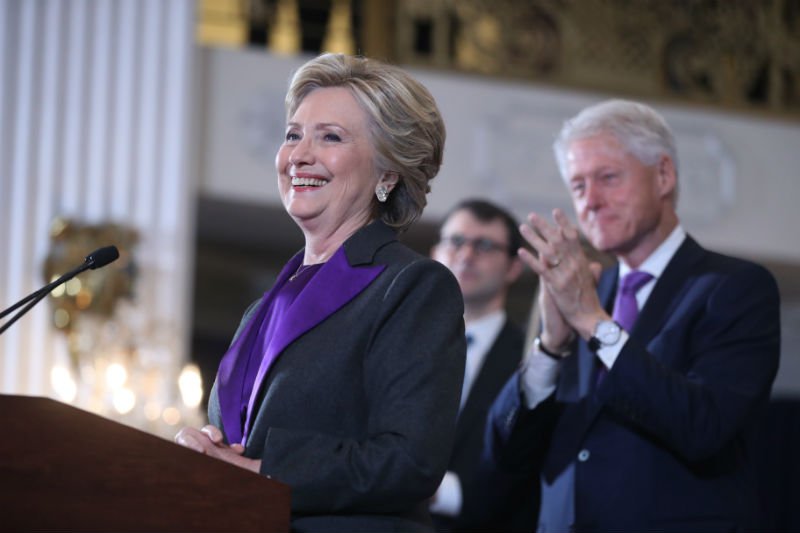 US Democratic presidential candidate Hillary Clinton just gave her concession speech to her supporters and team from her campaign this morning at 11:40 a.m. ET.

“Last night, I congratulated Donald Trump and offered to work with him on behalf of our country. I hope that he will be a successful president for all Americans," said Clinton.

She thanked her team and family after giving special praise and gratitude to Barack and Michelle Obama for their leadership over the past eight years. And she acknowledged her regrets.

"This is not the outcome we wanted or we worked so hard for, and I’m sorry we did not win this election for the values we share and the vision we hold for our country,” she said. “But I feel pride and gratitude for this wonderful campaign that we built together.

“I know how disappointed you feel, because I feel it too. … this is painful and it will be for a long time,” she said.

“We have seen that our nation is more deeply divided than we thought,” she said, but she also offered words of hope for unity.

“We must accept this result,” she said and offering her support to work with a future Trump administration.

“Donald Trump is going to be our president. We owe him an open mind and a chance to lead,” she said.

Read More: Donald Trump Will Be the 45th President of the United States ​

She offered the most encouraging advice for young girls, women, and all the “fighters” out there.

.@HillaryClinton: "To all the little girls watching never doubt that you are valuable and powerful.. to pursue and achieve your own goals." pic.twitter.com/qfMnS6QYLf

“To all the women, and especially the young women, who put their faith in this campaign and in me, I want you to know that nothing has made me prouder than to be your champion,” Clinton said.

“I know we have still not shattered that highest and hardest glass ceiling. But some day, someone will and hopefully sooner than we might think right now,” she said.

“To all the little girls who are watching this, never doubt that you are valuable and powerful and deserving of every chance and opportunity in the world to pursue and achieve your own dreams,” Clinton said.

Her words came after incredible applause from her running mate Tim Kaine shared the incredible accomplishment of Clinton winning the popular vote, her team, and becoming the first female candidate running for president for a major party in the US.

“I’m proud of Hillary because she loves this country,” said Kaine. “She is deeply in love with it. … That love of country is something that I think is obvious to everyone.”

“I could not be prouder of her. She has led an extraordinary life of public service. … I’m proud of her. A lot of Americans look up to her. Her candidacy and nomination was history and sends a message to our daughters that they can achieve the highest levels of politics," said President Obama.

Now more than ever we need to stand up and say: We are all Global Citizens

In addition to Clinton’s encouraging words, words from around the world, Trump and Obama have been respectful asking for unity and coming together.

President-elect Donald Trump praised Clinton on her efforts early Wednesday morning. He said she is owed “a major debt of gratitude for her service to our country.”

White House press secretary Josh Earnest confirmed Barack Obama called Trump congratulating him on his victory and inviting him to the White House on Thursday.

“Ensuring a smooth transition of power is one of the top priorities the President identified at the beginning of the year and a meeting with the President-elect is the next step," the White House said according to Reuters.

Read More: Here's How World Leaders Reacted to the US Presidential Election

Because as Clinton said, “we cherish a peaceful transfer of power.”