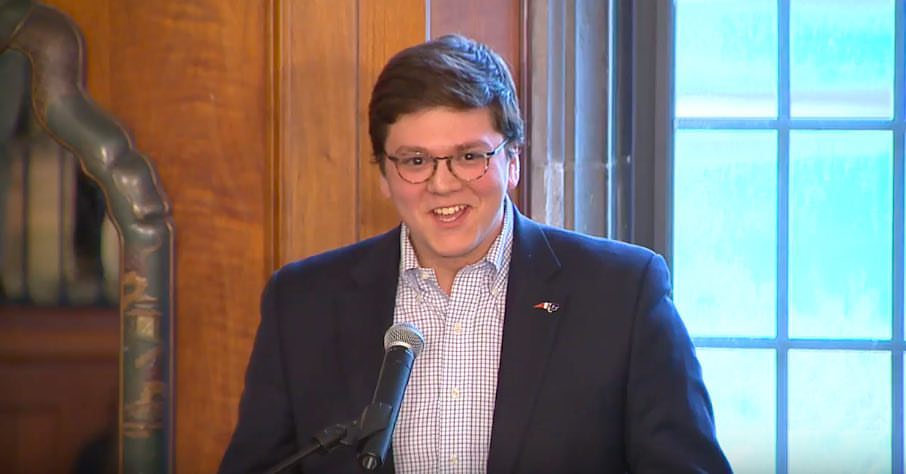 "It's a story that will hopefully resonate with anyone who is discriminated against."

Jason Flom, CEO of Lava Records and Lava Music Publishing, and former Chairman and CEO at Atlantic Records, is trying to introduce children to themes of inclusivity, individuality, and tolerance of those who don’t conform to social norms.

His children's book Lulu is a Rhinoceros, written with his daughter Allison Flom, explores these themes through the story of Lulu, a bulldog who identifies as a rhinoceros. Throughout the book, Lulu fights for recognition and eventually finds it in the smallest of characters.

For both children and their parents, Lulu’s story shows the importance of diversity, and could inspire the next generation of youth to believe in their own identity as changemakers who can build a more inclusive world.

Take Action: Tell the Netherlands Why Education Is the Key to Girls' Health and Empowerment

Global Citizen recently spoke with Jason Flom, who is also behind the acclaimed Wrongful Conviction podcast, to discuss the power of his new book.

How did you come around to the idea of writing a book? And not just a book but a children's book?

I love dogs, I’ve always loved dogs, and I’ve never loved a dog more than [my dog] Lulu. She’s a really special little being, she was trained to be a hospital dog and she worked in children intensive care for a whole year. I think there is little doubt that she saved a little girl's life. So she’s a pretty ethereal creature.

Then a few years ago I got involved with an organization called VetPaw, which is Veterans in Power to Protect African Wildlife. VetPaw is a group of elite US military veterans, who work in South Africa to protect rhinos and other animals from poachers and they are very effective. I joined their board, I spent some time in Africa with them, and I came home and I found I have a very strong spiritual connection to Rhinos.

They’re just magical, when you get around them it’s an unbelievable experience, they are so powerful and so dinosaur-ish. They are basically dinosaurs that survived, I think they’ve been around for 50 million years. My understanding is that they haven't evolved much over that period of time because there was no need. They are herbivores so they don't really destroy anything they just exist. And they are beautiful, lovable, and generally pretty docile and trusting.

Yeah. I also think there are some physical similarities, aside from the obvious size disparity. They play big. I once had a bulldog who use to pick fights with German shepherds, they don’t understand how small they are. The physical similarities don't stop there, they have these proportionally big bodies, short legs, and they are sort of round and tough. So, I made that connection to where Lulu is telepathically communicating with me like she was a rhino. From there I wanted to tell a story.

I knew I wanted to help the underdog, I love the story of the little guy winning. Fortunately, I wasn’t bullied too much when I was a kid but my brother was really bullied terribly and it's a memory that still haunts me. As anti-bullying is important to me, I wanted it to be a strong theme, and Lulu provided me with an opportunity to explore.

Was there a particular group you were thinking about when you wrote the book? There are some similarities in the book to gender non-conforming people, people finding themselves, and tolerance and acceptance, but is it broader than just one group?

Of course, to me its broader than even one species. I don't understand what goes wrong with people, none of us are born to hate anyone. When we are little we play with whoever we play with. It doesn’t make any difference what color they are, or whether they dress this way or act that way, or whether they are strong or weak, or feminine or masculine. Who cares? Nobody cares. Then, somehow or other, the whole process gets really corrupted or twisted and you end up with Charlottesville and things like that.

So certainly, Lulu’s journey is a metaphor for people who don’t identify as their physical appearance. That’s her thing, she doesn’t identify with her physical appearance. That's why in the book she very deliberately runs past the “no dogs allowed” sign into the zoo because she doesn’t identify as a dog. That sign is meaningless to her. She knows who she is, that's why the title of the book is Lulu is a Rhinoceros. It’s not Lulu thinks she is a rhinoceros or Lulu wants to be a rhinoceros.

It's a story that will hopefully resonate with anyone who is put down or put on or discriminated against. 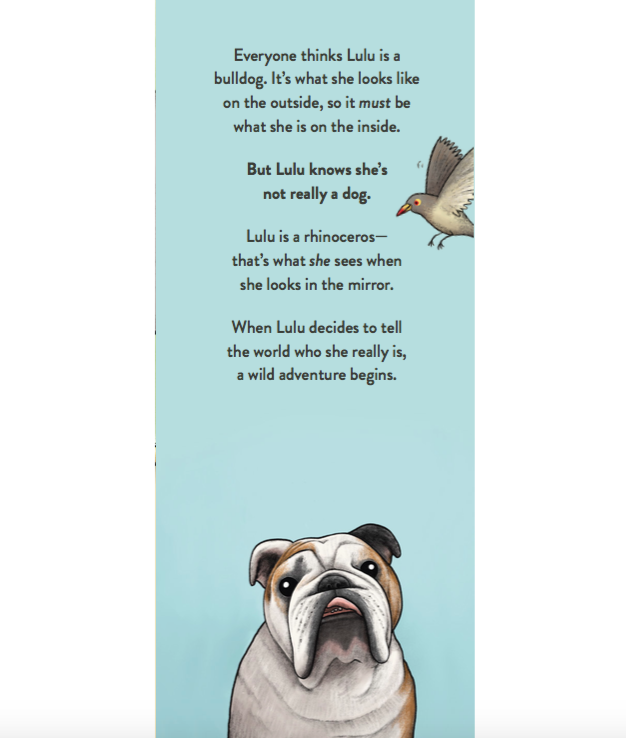 Lulu is a Rhinoceros

There is one part in the book that really stood out. When Lulu finally gets into the rhinoceros enclosure and a tickbird says “of course you are a rhinoceros because you're in the rhinoceros pen.” Was that moment speaking to the idea of being in a community that finally accepts you for who you are?

We went through a few different ideas of how she was going to be recognized and accepted. And ultimately we settled on the tickbird for a variety of reasons but one of the things I liked about that element of the pivotal moment is that the littlest character has the biggest impact. I hope that will speak to people who feel they don’t have a voice and show that they can make a difference.

Do you think there is anything particularly powerful about a children's book?

I think that a children's book can have a particularly meaningful impact because of the fact that people are reading at a time when they are the most impressionable. When they are forming their biases and prejudices, they are forming their cultural attitudes, they are discovering their own identities. Kids know. They know, and it seems that they are more aware, you hear stories of kids who are five or six years old who are dressing the way that they feel and not conforming.

So hopefully this book will let them know that that’s alright. That they are who they are.

And I’m hoping that there will be parents who are not enlightened, but love the story and think the characters are cute, who read the book to their kids because they are close minded don’t understand what the story is about.

Maybe that’s a lofty goal but I think it is bound to happen, that some very conservative, close-minded person will read the story to their child who will find in it something they can not get from their parents at home because of the fact that they are being told to conform. And that’s just fine with me. Those are probably the most important people to reach because they are going to have trouble, they may not have the same access to those messages and those positive affirmations that kids who are in the more open-minded family environment might have. I’m still hopeful that people change, we need to have some change going on right now.

And do you think that’s going to come from kids? Whether they are reading this book or not? The change that’s needed?

I’m generally an optimist it is hard to stay optimistic these days but I think the Parkland kids are the face of the new generation and the impact that they are having is really meaningful and they may provide the tipping point.

I think all of us who rise out of history have to do what we can, you know they say “do what you can where you are with what you got?” So I’m very lucky to be in a position where I can actually have a voice where I can talk to people like you, where I can get an audience with Global Citizen, get the message out there.

Do you plan on writing more children's books or books in general?

Where do you see her going with them?

Everyone's going to have to wait and see. We have a lot of ideas, there's a lot of stories to be told, there’s a very strong possibility of a TV series, I would love that. I think she’d, through her adventures, kids can learn and grow along with her and take some joy and hope and humor. Look the other thing that has to be mentioned is I could have never done this by myself.

Enlisting my daughter's help was a game changer, she’s getting her master's degree in playwriting, she’s a very good writer, and she’s also very sensitive to these issues. Finding the illustrator was a miracle. I mean Sophie Corrigan is, well you’ve seen the work. So it took a team. It’s actually sort of surreal to me how it actually came together. I just feel really lucky to have had the good fortune of working with really talented people, to take this crazy idea of mine and turn it into this beautiful thing that it has become.

This interview was edited for length and clarity to the reader.