Once the Site of the World's Largest Nuclear Disaster, Chernobyl Aims to Be Massive Solar Energy Farm

The radiation soaked area could be a primary power source for Ukraine again.

Thirty years after Chernobyl became the largest nuclear disaster in human history, the area around the defunct power plant could start providing energy again. Ukraine is entertaining investment offers to build the world’s largest solar power plant in the Chernobyl exclusion zone. The initiative will start with a small 4-megawatt project that will be installed by the end of this year.

The 1986 Chernobyl disaster left 30 people dead in the immediate aftermath and forced hundreds of thousands to relocate. Many deaths in the last 30 years have been linked back to the accident, but most have not been conclusively proven that the radiation release was the direct cause of those fatalities. The United Nations Scientific Committee on the Effects of Atomic Radiation (UNSCEAR) says that apart from increased thyroid cancers, “there is no evidence of a major public health impact attributable to radiation exposure 20 years after the accident.”

The 1,000-square mile exclusion zone around the nuclear power plant is drenched in radiation. The area, which is the equivalent of Luxembourg or the US state of Rhode Island, will take 24,000 years to fully recover.

The mostly abandoned area has become a thriving wildlife refuge and in 2011 was declared an official tourist attraction.

The empty expanses of the exclusion zone are an ideal place to install solar panels, according to some experts. The land is cheap, largely devoid of human habitation, and, most importantly, already includes power transmission equipment that can be repurposed from the defunct nuclear power plant. These attributes led the Ukrainian government to propose building a 1,000 megawatt solar farm in the zone.

If built today, the new plant would be the largest solar energy facility in the world. The government is talking to investors from the US and Canada as well as the European Bank for Reconstruction and Development (EBRD), to raise the estimated $1.1 billion dollars needed to complete the installation.

Read More: Visible From Space, the World’s Largest Solar Plant Switches on in the Sahara

Doubts about the viability of the plan range from worker safety to the effectiveness of solar panels in the Chernobyl area.

The radiation that permeates the exclusion zone could potentially endanger any workers involved in the project.

Today, there are about 5,000 people that regularly work in the exclusion zone, including researchers, nuclear safety workers, forest fire prevention personnel, and even tourism support staff. They are all on strict rotations of 15 days in the zone and 15 days out of the area to keep long-term radiation exposure to a minimum. Presumably, workers on the solar project would follow the same precautions.

Concerns about the proposed solar farm also extend to its viability as a source of power.

"Chernobyl is not the best place to build big solar farms, because it's in the north of the country," Dmytro Lukomsky, chief operating officer of Rentechno, a solar installation company in the Ukraine, told Fast Company. "There's a difference of maybe up to 10% more generation in the south of Ukraine …there are a lot more attractive places in the south."

Chernobyl may not be the most desirable location for solar power but peer projects prove it can be viable. A $25-million project in Belarus that will be completed this year, is only about 20 miles north of Chernobyl. Further, the exclusion zone receives more solar radiation than anywhere in Germany, a nation that leads the world in solar energy with 39-gigawatts of annual production. 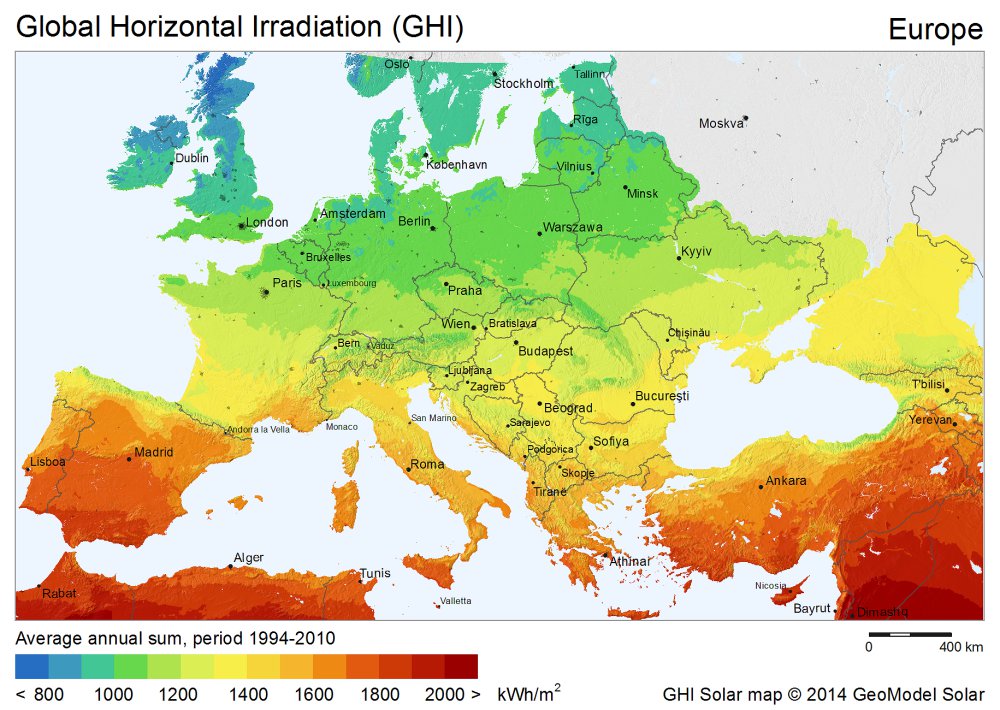 Solar energy is booming in Ukraine. A 2015 update to the nation’s energy strategy aims to diversify and reduce reliance on fuel imports, increase domestic production, and invest heavily in renewable energy sources. The near-term goal is to provide 11% of the nation’s energy needs from domestic wind and solar projects by 2020.

Read More: This Material May Change the Solar Industry Forever

The goal is economic and political. Ukraine’s largest energy partner is Russia. Russia has a long history of using its energy resources as political and security weapons in the region. Over the past five years, Ukraine has worked to wean itself off of the Russian energy market, reducing natural gas imports from 40-billion cubic meters in 2011, to 5 billion in 2015.

Russia’s annexation of the Crimea peninsula in 2014 put Ukraine’s energy independence plan to the test. The loss of the Crimea stopped a crucial gas pipeline deal with Azerbaijan and Russia took over a number of solar power projects from Ukraine, including Europe’s largest solar park.

Doubling down on solar energy

Despite the loss of the Crimea, Ukraine plans to build 34 new solar farms this year with a total capacity of 120-megawatts.

Four megawatts of that new capacity will come from a Ukrainian-developed installation inside Chernobyl’s exclusion zone. The installation is expected to be completed before the end of the year. The project will test the safety of workers in the zone as well as the viability of the existing power lines. It seems Chernobyl will once again provide energy to Ukraine.