Since 2012, Global Citizens have taken 1.59 million actions toward girls and women initiatives. These actions, combined with our high-level advocacy, and the efforts of partners, including CHIME FOR CHANGE, across the development sector, saw 21 new commitments and 12 announcements in support of gender equality.

Together, these announcements and commitments are valued at $630.25 million US dollars, and are set to affect the lives of 8.64 million people by 2030.

In a report released today, Global Citizen provides an accountability report-back on the status of these commitments, which finds that we are 56.1 % toward impacting the 8.64 million lives set to be affected, and that at least $290.76 million has been raised or disbursed toward commitments worth $630.25 million, which is 46.13% of target.

You can read the full report here - or read on for a summary.

This is our third accountability report to provide progress updates on the more than 200 commitments and announcements made from Global Citizen platforms or following Global Citizen campaigning since 2012. It follows our previous reports on WASH and health.

These reports systematically and transparently review progress, and involve extensive research and outreach by the Global Citizen team. For each commitment or announcement, we outline what our involvement was, what exactly was promised, and what’s happened since. And, we use a four color system to summarize progress — green for on-track or fully complete, amber for some risk, red for significant risk or abandoned, and grey for too soon to tell.

The report outlines progress against the categories outlined in The Girl Agenda report that Global Citizen jointly wrote in 2016, with two additional areas of work:

Accountability: While we have no commitments specifically to see a data revolution on girls and women's issues, we regard this entire report as a contribution toward seeing all efforts toward Global Goal for Sustainable Development number five — Gender Equality — fully measurable, monitored and made transparent. Accountability is also one of the reasons why we have partnered with others on The Girl Agenda.

Abolishing discriminatory laws: Five commitments and announcements. One is too soon to tell, two are in progress, and one is complete.

Ending child marriage: One announcement, an ongoing campaign and it is too soon to tell the outcome.

Health and family planning: 11 commitments and announcements. One is too soon to tell, two are in progress and running on track, and the remaining eight commitments are complete.

Getting girls into school: Two commitments and announcements, of which one is progressing on track and the other is complete. 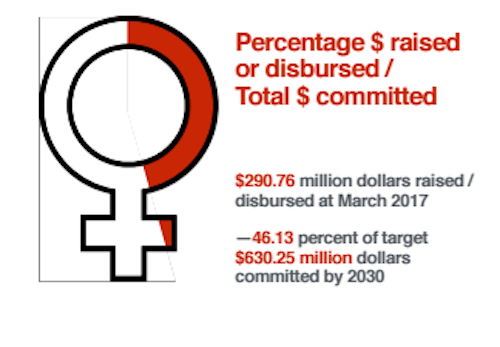 Supporting NGOs and the international community: Two commitments of which one has been abandoned while new leadership and future direction is established, and the other — a bundled commitment —- is complete exceeded. The bundled commitment was made on behalf of 14 partners,12 of whom met or exceeded their promises, one completed just shy of their target, and one organization wound up.

In compiling this report, we have noted with interest a number of key themes that our team, partners and commitment makers have shared with us as being important drivers of future delivery of commitments related to girls and women:

Global Goals make gender truly intersectional, but measurement lags: The development of the Global Goals for Sustainable Development treated gender as both a standalone issue — Goal 5 — as well as a cross-cutting theme across all of the goals. This is an important step that addresses the deep structural causes of gender inequality, however it does raise the need for careful programming and policy design to ensure that interventions aren't just paying lip-service to girls and women, and have clear, tangible results. In some of the commitments we are tracking, officials were clear that commitments were gender-sensitive, but sometimes didn't have specific data or evidence to demonstrate the targeted impact that they were having. This reinforces the key findings of the first report of the High-Level Panel (HLP) for Women’s Economic Empowerment, published in September 2016 as part of the UN General Assembly meetings by the High-Level Panel’s co-chair, and President of Costa Rica, Luis Guillermo Solis Rivera, which identified priorities to achieve gender equality and called for a strengthened female voice and representation. Building on this effort, today we seek to move this agenda forward, not only through this accountability report, but by launching The Girl Agenda campaign.

Protection AND empowerment: With the introduction of the Global Goals, a sharper focus has been introduced on the need to not just protect girls and women as a vulnerable group, but empower them. Ideally, this should be seen through a range of interventions that progressively create space for girls and women to access opportunities, however, much policy and programming continues to treat these as silos. The gradual shift being made by some groups towards addressing this — whether by donors, national makers, or implementers — is to be applauded, and we hope to see this trend continue. This is also a trend that Global Citizen has itself fallen prey to at times, with our team working hard to ensure that we focus on empowerment and opportunity as the end goals in achieving gender equality.

Global Citizen's role has shifted from supporting projects to policies: When we first started campaigning on issues specifically related to girls and women in 2012, we recognized the complex cultural, religious and systemic reasons for gender inequality, and felt poorly equipped to make a real difference in those areas. Instead, we focused on supporting specific campaigns and projects that we knew were having impact. Over the past five years, we are pleased to have built partnerships across the community that have enabled us to play a more useful role in tackling the systemic causes, and play a much stronger role toward influencing policies — from #SheDecides to #LevelTheLaw. In 2015, Global Citizen joined forces with CHIME FOR CHANGE in a long term partnership to promote gender equality. As part of that, we are committed to increasing the amount of work we do with youth advocates and partners working at a national level in changing laws and practices in their countries.