Canada Will Accept Yazidi Refugees After Plea From Nadia Murad 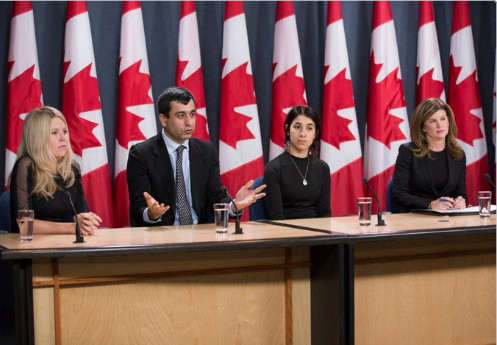 Nadia Murad was seated in the gallery of the Canadian parliament Tuesday as lawmakers there voted unanimously to recognize the genocide against the Yazidi people and accept Yazidi women and girls as refugees.

Murad has been campaigning around the world for global recognition for the Islamic State’s attack against the Yazidi people of Iraq that began in 2014. She was only 17 when ISIS attacked her village, killing her brothers and taking her as a sex slave.

Murad was able to escape three months later and sought asylum in Germany. She has since become the most outspoken Yazidi refugee calling for prosecution of ISIS in international court, and teamed with human rights attorney Amal Clooney earlier this year to try and have the case brought to the International Criminal Court.

In September, Murad was appointed a United Nations Goodwill Ambassador, and has advocated for greater action from other countries in defeating ISIS and rescuing those Yazidis still being held hostage.

Read More: Nadia Murad Wins Award for Being the Badass Woman She Is

Murad watched as Conservative lawmaker Michelle Rempel spoke on the floor of the House of Commons, praising Murad’s resilience and vowing that Canada would stand with Murad in urging other countries to do more for the Yazidi people.

“She’s instead been the spark of light that has born the hope of her people, awakening the world to our moral obligation to protect, preserve, and bring justice to victims of genocide,” Rempel said.

Murad received a standing ovation from the members of Parliament, to whom she mouthed “thank you” from her seat, according to the Huffington Post.

Read More: Amal Clooney on Nadia Murad, Yazidi Case: ‘I Can’t Walk Away From This’

The 23-year-old survivor also wrote an open letter to the Parliament ahead of the vote, asking them for their support.

Grateful to @MichelleRempel who stated today's motion & relentlessly fought for it. Also grateful to Honorable @RonaAmbrose for her support. pic.twitter.com/ZlOo2cMbyO

“Our people have been nearly destroyed by ISIS. We have no choice but to ask countries like Canada to help us, countries that have the compassion to understand the cries of the persecuted,” she wrote.

She also described the dire situation of Yazidi girls and women in refugee camps across Iraq, Greece, Syria, and Turkey, where more than 80% of Yazidis now live.

“Every refugee lives in difficult conditions. But for the women and girls who were subjected to systematic rape and torture at the hands of ISIS, the situation is even more dire. In the refugee camps, they are not provided any special care which would help them recover. They live in poverty without access to health care or psychological support.

All 313 lawmakers then voted on Rempel’s motion to provide asylum for Yazidi women and girls within 120 days and to formally acknowledge genocide had occurred.

Ahead of the vote, Prime Minister Justin Trudeau spoke on behalf of his country:

“Canada will always be an open country willing to step up and support people in need from all around the world.”