The bright blue tuk-tuk has become a symbol of Cambodia’s recent developments in all areas.

On the streets of Phnom Penh’s renowned Russian Market, a bright blue tuk-tuk has become a symbol of Cambodia’s recent developments in solar technology, social activism, and coffee culture. Operated by Aziza’s Place, a nonprofit learning center for underprivileged children, Cambodia’s first solar-powered, coffee-selling tuk-tuk has also become a way for disadvantaged women to lift themselves out of poverty.

Before joining Aziza’s Place, Win Seun, 40, was a garbage picker in Phnom Penh who collected recyclables and sorted through a nearby dump site, only making $2 a day to support herself and her five children. However, since joining the coffee program, she’s learned valuable customer-service skills as well as how to speak English, how to operate the tuk-tuk, and even how to educate people about the benefits of recycling.

“Before, when I worked as a garbage picker, it was difficult, dangerous, and dirty,” says Seun in a short video about the coffee program. “Now, here, we are learning about hygiene, making coffee, green tea, and noodle salad.” 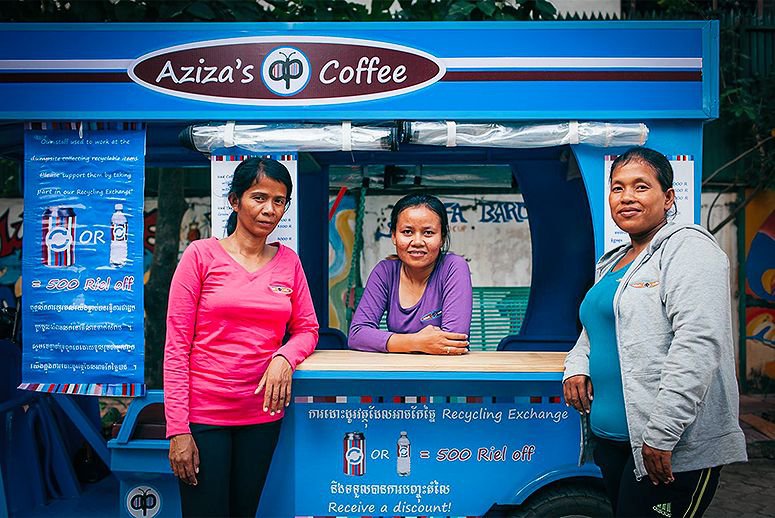 The special tuk-tuk was developed by Star8, an Australian company that manufactures solar tuk-tuks, buses, and roof panels. It recently set up a factory in what has become Phnom Penh’s first solar-powered building. Solar panels on the tuk-tuk’s roof generate enough power for the vehicle to travel 75 miles, with a top speed of 35 miles per hour before needing to be recharged. According to those in the solar industry, high levels of solar radiation combined with the need for low-cost power make Cambodia an ideal place for the development of solar energy.

“The potential for Cambodia to become a solar power is huge, given how much solar radiation you get here all year-round,” Phil Stone, Star8’s managing director, told Reuters recently. “But the challenges are large too.”

Though Cambodia has made great strides in reducing poverty, according to the World Bank, it is still one of Southeast Asia’s poorest nations, where the loss of 30 cents a day in income would “throw an estimated three million Cambodians back into poverty, doubling the poverty rate to forty percent.”

However, selling coffee from a tuk-tuk on the streets of Phnom Penh is a sign of good things to come. Just ask the owners of Brown’s Cafe, a budding chain of popular Western-style coffee houses in the city.

“At first, we aimed for fifty percent of our target market to be expats,” Brown’s cofounder, Chang Bunleang, 27, told The Phnom Penh Post. “Not many Cambodians drink coffee; they just need a place to hang out. So at first we thought we needed a bit of time to educate them about what a cappuccino is or what a macchiato is. After a while, though, we saw the trend kind of tilt toward the Cambodians.” 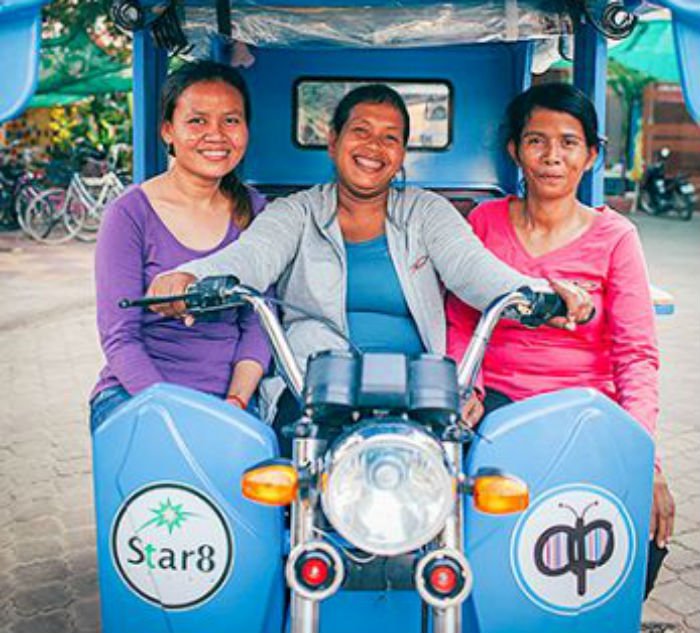 According to UN data, 68 percent of Cambodia’s population is under 30 years old. Like Bunleang, who studied in Australia, his business partners studied abroad, as do many young, educated Cambodians, bringing back a desire for Western items such as fancy coffee drinks, coffee houses, and ideas for a better future.

Meanwhile, Seun is working hard to make sure her children rise with this youthful tide.

“I am very happy,” says Seun, laughing out loud in the video, “and what I like most is the logo on the back of my shirt.”

The logo reads “Ask Me About Recycling Exchange.” In addition to selling coffee, green tea, banana cake, and noodle salad, Seun and the other women in the program promote recycling, offering their customers a discount in exchange for an empty plastic bottle or an aluminum drink can—a far cry from having to pick through the trash to feed their children.

This article was contributed by David McNair in support of TakePart World and first published here.