Buckets of cold water and reversing preconceptions in Laos

Each person is a fascinating collection of experiences and perspectives. And every person you meet can change and grow who you are. This is a central aspect of being a global citizen: allowing yourself to learn from others. Just check out HONY’s latest series if you need convincing.

One person who has broadened the way I see the world is my college roommate, Brendan Walsh, a Fulbright scholar who has taught in Korea and Laos. He writes an illuminating blog about the intersections of culture and identity and, essentially, what it means to be a global citizen. Here are some of his top posts. 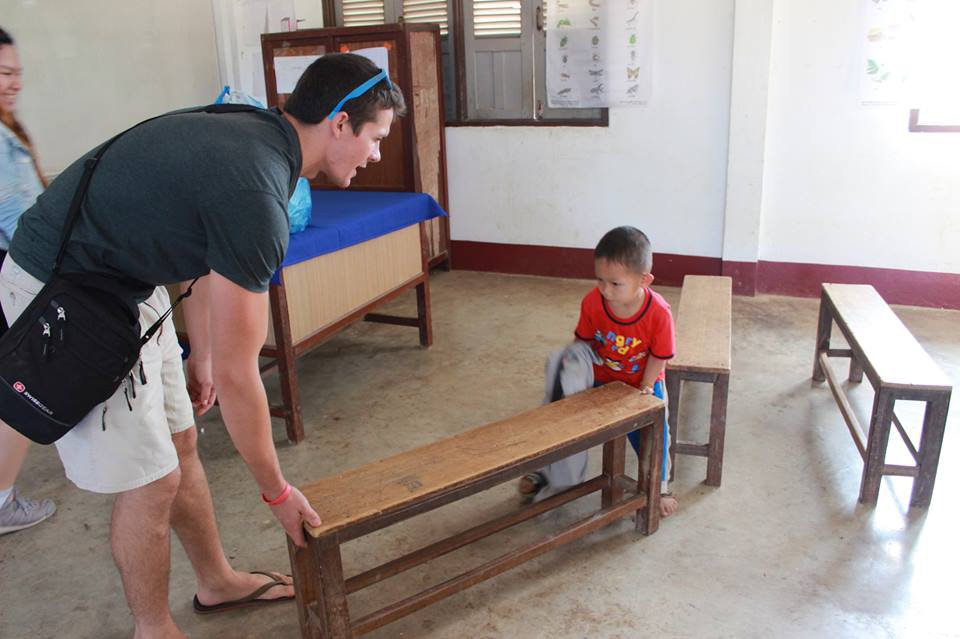 As part of Education Month, I asked Brendan a few questions about his experience teaching in Laos. Although Laos is considered one of the top 10 “movers” over the past 20 years as far as development goes, a large swath of the population still lives in poor, education-deprived areas, and wealth generally accrues to a small, ultra-elite group.

But Laos is far more than poverty. As Brendan says, “I truly love Laos as a country, as a beautiful mixture of ethnic groups and people, as a unique culture that deserves so much more positivity and hope than history has dealt it.”

JM: What motivated you to teach in Laos?

BW: So many things drew me to Laos—my general lack of knowledge about its culture, language, government, food, previous experiences living and traveling throughout Asia, and mainly the romantic idea of inhabiting a place that few can pinpoint on a map, let alone have ever stepped foot in. Of course, as I intensively researched Laos upon hearing about my teaching grant, the less it became about some personal journey and the more I felt I was serving a purpose—however tiny the impact.

A positive mission to me is about being an empty vessel: no preconceptions, nothing beyond education and human connection, learning the language, engaging in cultural exchanges. 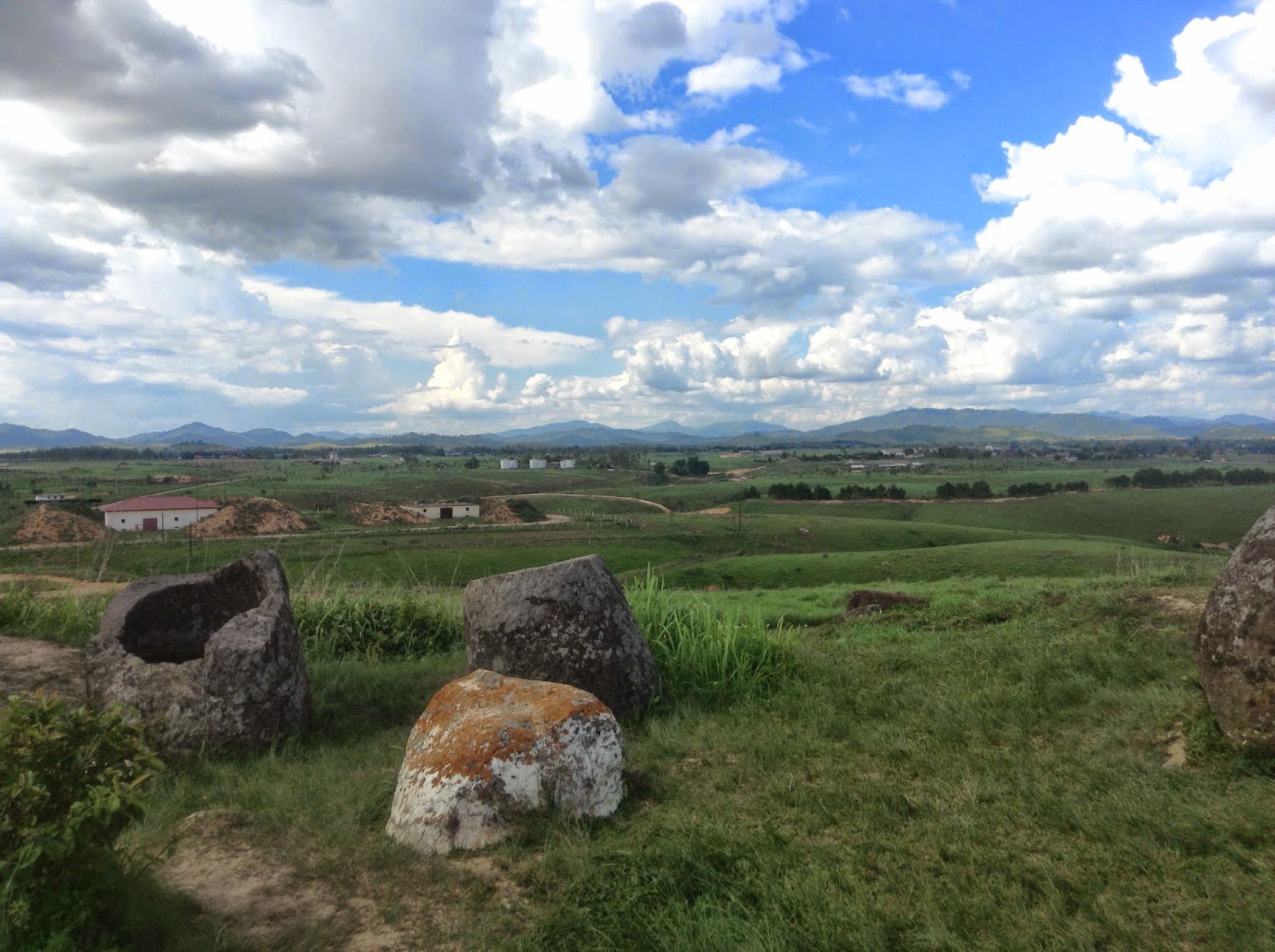 Laos is the most bombed country in the world per capita. Between 1964 and 1973 the United States dropped those bombs on covert bombing missions, and the unexploded ordinances continue to hinder development in some rural areas. My motivations, as I grew closer to departure, were very much about setting a standard for a positive mission in a country that my own government had deeply scarred. A positive mission to me is about being an empty vessel: no preconceptions, nothing beyond education and human connection, learning the language, engaging in cultural exchanges.

I don’t think one person can undo massive devastation, and I certainly don’t believe that I’m special in any way; but as one person I did have the opportunity to form bonds with my students that potentially reversed preconceptions and gave them better access to English and contemporary pedagogical styles.

JM: From your experience, what needs to be done to address poverty in the country?

BW: Poverty in Laos is about access. As in all countries, there are very rich people and very poor people, and Laos’ superrich have a gratuitous share of the wealth. They have access to foreign education, information, political influence, foreign investment, etc. Rural and urban poor Lao people who want access to education, governmental resources, and basic information are unlikely to receive it without massive sacrifices to their subsistence-based lifestyles. This is a problem with infrastructure, and that issue is governmental. 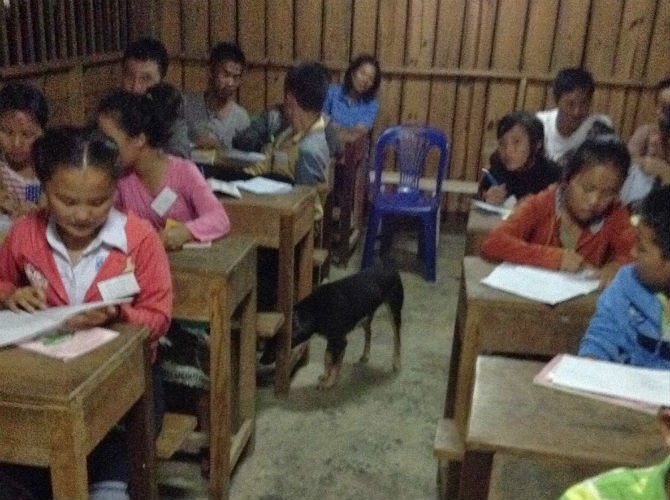 I’m not too well-versed in Lao politics, but no one is, because they barely exist. The few in high government positions seem to hoard power and chop up the wealth between themselves and their interests while allowing foreign aid, NGOs, and volunteers to pick up the scraps. There is a push-pull between some very committed outsiders and Lao people who want to help the general population and the powerful insiders who want to reap the benefits of high party positions. Without a solid transportation system (basic roads and highways that connect the country), an education system that pays all teachers a living salary, adequate healthcare throughout the country, and government transparency and legitimacy, Laos will continue to suffer many of the same problems.

Forced integration and access is devastating—and it will only lead to more poverty and wealth disparities.

I should really say that certain groups in Laos would probably prefer to continue in their subsistence-based lifestyle. There are ancestral cultures that have been agrarian and off-the-grid for longer than our country (and the country of Laos) has existed—one of my instructors in Laos, the late scholar Dr. Grant Evans, explained how many tribes he had lived with didn’t want the trappings of industrialized modern life. Of course, this may not be true of all members of those tribes, and the access should still exist, but these things must be handled carefully. The Lao government and foreign industry has a history of displacing tribal people in order to extract mineral deposits or harness rivers for hydroelectric power, which is mostly used by China. Forced integration and access is devastating—and it will only lead to more poverty and wealth disparities. 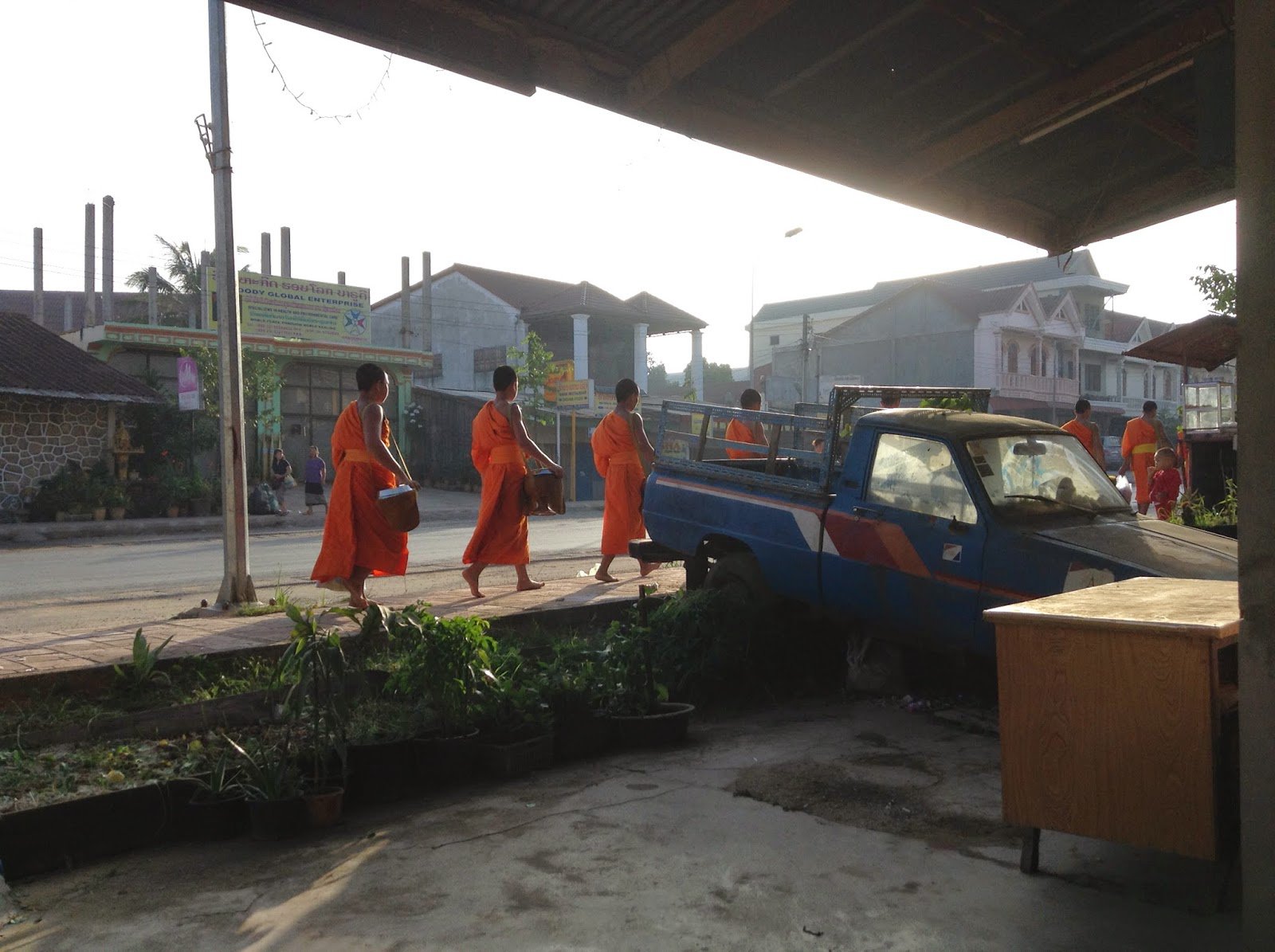 JM: What barriers to education exist?

BW: Access and resources. There isn’t much of an imperative for a child to pursue further education when well-trained teachers and nearby schools are scarce and lacking in funding, and there is work to be done in subsistence agriculture and general day-to-day survival. Poverty is a magnifier. Impediments to education exist worldwide, but coupled with a lack of infrastructure and resources, those barriers become even more pronounced. 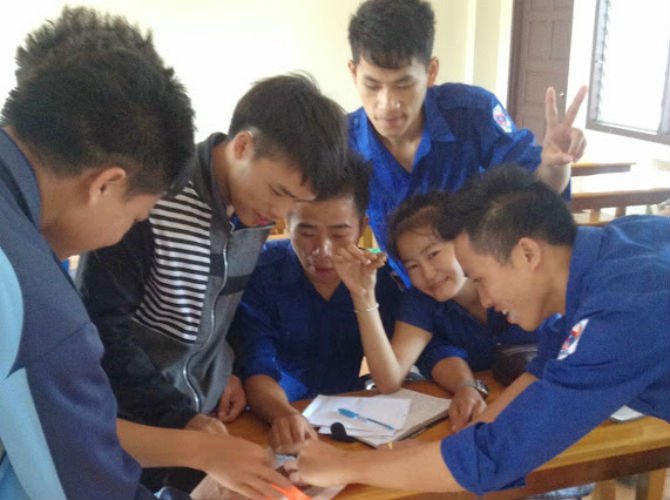 JM: Are girls being provided equal opportunities? If so, not, why?

BW: From my small experience, yes and no. My courses at the National University and my service visits to rural elementary schools contained an equal or greater number of girls. I can’t speak for the entirety of the country and how the primary education system is run, but it seems that in the capital of Vientiane women hold advanced degrees and pursue education. But what was I not seeing? A small subset of the population may be able to send their children to school, assuming a school is nearby and they have the ability to get there. Of course, in rural Laos, where poverty is more rampant, there is less access and investment in education. 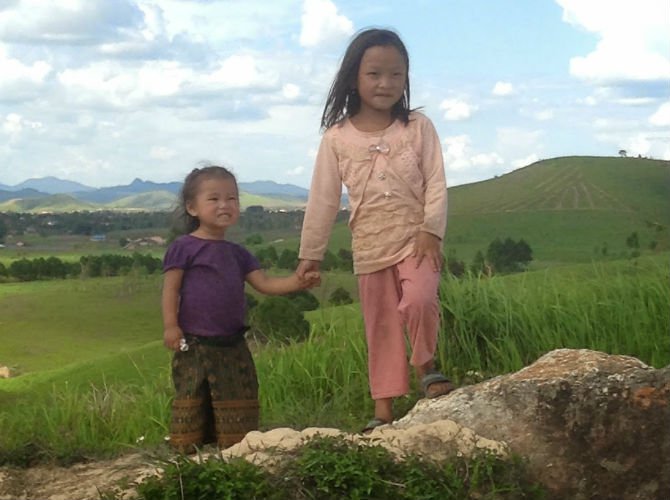 Many young rural women still begin raising families at quite a young age. Obviously, when a girl in her teens has a child she is unlikely to continue pursuing education.  I noticed in your write-up on Educating Girls that you mentioned complications during pregnancy. This is a HUGE issue in Laos. I help support an organization called Clean Birth that provides nurses training and clean birthing kits to women in rural southern Laos (Salavan Province). The infant mortality rate in Laos is a major concern, and it is preventable with sanitary practices and proper medical training. This is an organization with a direct line to those it serves, and it can go a long way to preserving the future for young women and their babies.

JM: Can you describe one of your favorite teaching moments in Laos?

BW: I feel as though the tone of my responses doesn’t quite convey how much I truly love Laos as a country, as a beautiful mixture of ethnic groups and people, as a unique culture that deserves so much more positivity and hope than history has dealt it. Teaching in Laos was an absolute joy. Cliché alert: I had so many wonderful moments that it’s difficult to isolate a single time when I was more ecstatic than any other. Students and colleagues were humble, generous, kind, and enthusiastic about learning.

The open sharing and reception of cultures, ideas, and information is what I value most about education.

My favorite teaching moments occurred outside of the classroom, and I’m sure my students would agree that our time outside the classroom was equally vital. My favorite teaching moment was a Lao New Year party at one of my student’s houses where I was less of a teacher and more of a student.  Lao New Year is an exuberant and raucous celebration in April when the hot season temperatures become brutal—I went to Chantaphone’s parents’ home on the back of my student Oralasoun’s little motorbike. The entire party I was taught the intricacies, significance, and hilarity of their celebrations while speaking half English, half Lao. The entire class attended, and it was the first time my students saw me outside of the professor role—they respectfully poured buckets of cold water on my head and the pretense of student-teacher faded into a human connection.  It was the kind of cultural exchange that deeply changes those involved. The open sharing and reception of cultures, ideas, and information is what I value most about education. 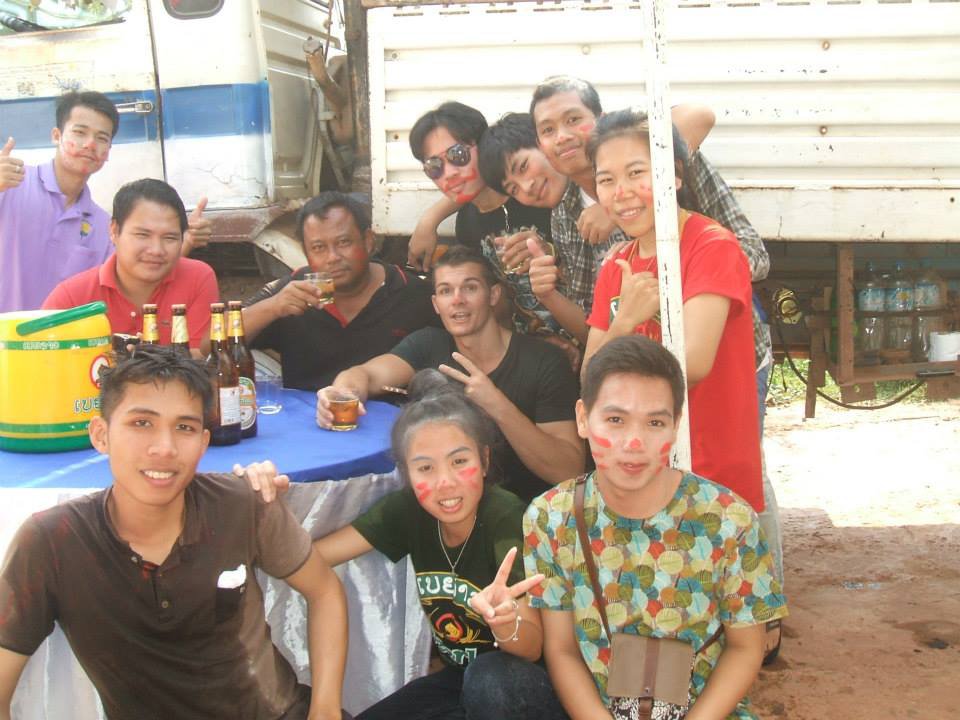 All images were provided by Brendan Walsh