Brexit Diet Could Lead to 5,600 Deaths a Year as Fresh Fruit and Veg Prices Shoot Up

And it could increase healthcare expenditure by hundreds of millions of pounds.

By Marco Springmann, Senior Researcher, Oxford Martin Programme on the Future of Food, University of Oxford

Britain is highly dependent on imported food. By value, imports make up more than 90% of the fruit and vegetables consumed in the UK and half of the meat. Brexit is expected to increase trade costs and make food imports more expensive, something that could lead to changes in diets and dietary risk factors that influence health.

In fact, Brexit could lead to up to 5,600 diet-related deaths per year by 2027, additional healthcare expenditure of £600 million, and increase the GDP losses of Brexit by up to 50%. That’s according to estimates my colleague Florian Freund and I have published in a new Oxford Martin School Working Paper.

Between a hard and a soft Brexit

Analysing the potential implications of Brexit is a tricky business. The concrete details of Brexit remain unclear. Proposals range from various forms of “soft Brexit” that include a new trade agreement with the EU, to a “hard Brexit” in which the UK falls back on the (higher) tariffs set out by the World Trade Organization.

We evaluated these opposing ends of the spectrum and compared them to a no-Brexit (“remain”) scenario. We used an agriculture-economic model to simulate the impacts that changes in tariffs and regulatory measures could have on the agricultural sector in the UK. And we used a national disease model to estimate what the resulting dietary changes would mean for mortality from chronic diseases, such as coronary heart disease or cancer. 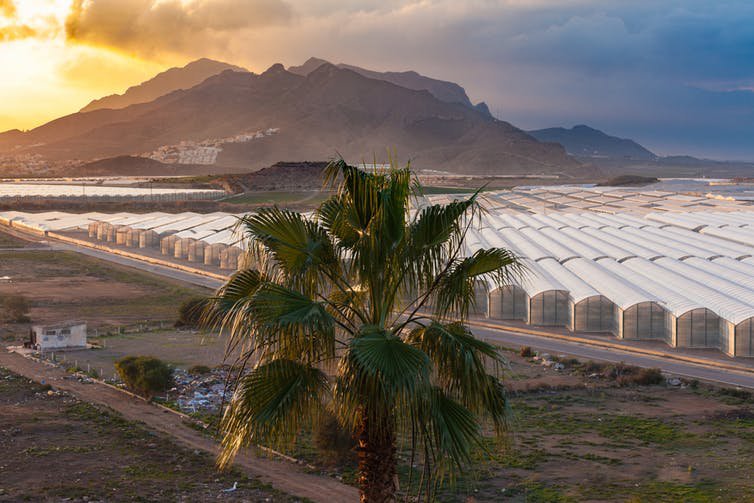 Spain provides around a quarter of the UK’s fresh produce imports. Pi-Lens / shutterstock

Currently so-called “dietary risks”, including not eating enough fruits and vegetables or eating too much red and processed meat, are the second biggest risk factor for mortality in the UK, after tobacco. Our analysis suggests that Brexit could further increase those dietary risks.

As a result of increasing trade costs from customs checks, new regulation, and higher tariffs in the case of a hard Brexit, we estimated that prices for most foods would increase. Foods that are critical for good health would be especially affected. Fruit and vegetable consumption could be reduced by up to one portion each per person per week under a hard Brexit, and by half a portion each under a soft Brexit. The consumption of nuts and legumes could decrease by up to 7%.

Other foods would be affected as well. Dairy consumption could go down by up to one portion per week, meat consumption by half a portion, and total calorie intake could decrease as well. Some of those changes have health benefits, such as reduced intake of red meat or, for overweight people, reduced calorie intake. But we estimated that those potential benefits would be outweighed several times by the reductions in health-promoting foods.

According to our estimates, the Brexit-related changes in food consumption could lead to 5,600 additional deaths per year under a hard Brexit, and to 2,700 additional deaths under a soft Brexit. This represents an increase in overall mortality of 0.9% in the hard Brexit scenario (about 610,000 people are projected to die in the UK in 2027), and 0.4% in the soft Brexit scenario. For premature mortality (before age 70), the increases are slightly higher.

Most of the additional deaths would be due to cancer, coronary heart disease and stroke, which are associated with reduced consumption of fruits, vegetables, and nuts.

The Brexit bill for health

The health impacts of Brexit also have economic implications. In our analysis, we quantified the economic costs of the additional diet-related deaths by summing up the extra healthcare expense, and by using valuation techniques commonly used by government when looking at the costs and benefits of projects that could affect mortality, such as new nuclear power plants or roads. 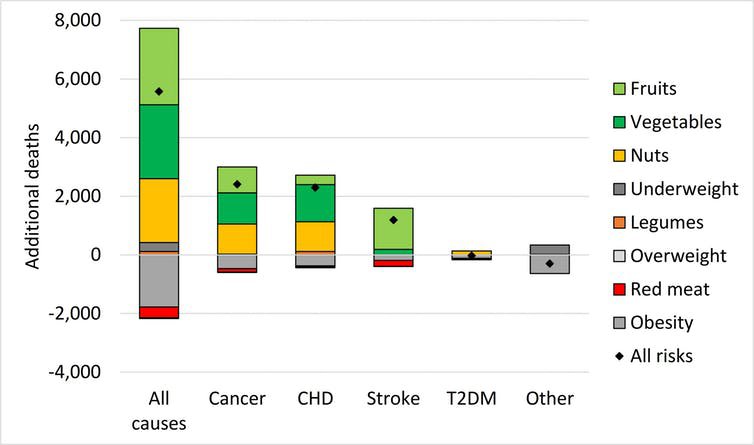 Additional deaths in UK after Hard Brexit, by risk factor and cause of deaths. Springmann & Freund (2018), Author provided

The Brexit bill for health adds to the impact that leaving the EU is expected to have on other sectors which will also face higher costs of trade and production. We and others have estimated losses in real GDP (a measure of output corrected for inflation) to range from 0.5% for a soft Brexit to 1.4% for a hard Brexit (in nominal terms, that would be 1.6-3.6%). The health costs of Brexit amount to 0.3% to 0.6% in terms of real GDP, and therefore increase the overall economic losses of Brexit by 40-50%.

Given the UK’s import dependence, in particular for fruit and vegetables, any Brexit-related increase in trade costs will make it harder to get hold of foods that are critical components of healthy diets and chronic-disease prevention. Whatever form Brexit might take, our analysis suggests that it will significantly impact the British food system and negatively affect the health and welfare of British citizens.