Make the most important meal of the day that bit more meaningful.

Why a Global Citizen Should Care
In this era of globalisation, supply chains for everyday projects spread all over the world. While this can foster economic growth, the harmful consequences of purchases can often be hidden behind cunning, colourful packaging — save where there is informed choice. You can join us by taking action here on sustainable and ethical supply chains.

There a few things as simple and comfortable as spreading peanut butter on toast for breakfast in the morning. Or cooking up a hearty bowl of porridge. Or cracking into a boiled egg with soldiers.

But sometimes, an innocent peanut butter sandwich could be fuelling deforestation in Indonesia; your cup of tea could leave the tea pluckers without a decent wage; and the cheery berries on your granola could be belching out an unhealthy amount of carbon dioxide.

No one wants to think about that before 9 a.m. But armed with the right information, we might make a small positive contribution with our purchasing power. The question is: what do we buy?

Facing an abundance of breakfast options, here are five ingredients that could make your honest breakfast that bit more wholesome.

To many of us, the zing of blueberries over crunchy granola may be everything we need to motivate us to wake up in the morning.

However, many popular fresh fruits such as strawberries, blueberries, peaches, mangoes, and bananas have a very limited growing season in the UK — and many tropical fruits have no growing season at all. This means that outside the summer months, fresh berries will likely be flown over from South America, or New Zealand, contributing considerably to food miles and greenhouse gas emissions.

The Independent reported that air freight emits more greenhouse gases per food mile than any other mode of transport, and that air freighting blueberries emits 26 times more carbon dioxide than shipping them.

An Oliver Twist inspired breakfast always starts with a warm base of gruel (or porridge). While we’re sure little Ollie didn’t get the works, we topped ours with raspberry compote, nuts, bananas and a flowered fig sure to have you begging for more 📚 #booksandfood#chefsouschefpic.twitter.com/H4y0NVX08O

Rather than figuring out which foods are more likely to be shipped, you can go one step further by preparing breakfast fruits at home.

Making compote yourself, especially at the end of the growing season when fruits can be found for knock-off prices at farmers’ markets, is a solution that not only helps reduce the burden on the planet, but will preserve your precious memories of summer everytime you reach for a Tupperware.

Alternative milk sales are booming — sales increased by a third between 2015 and 2017 in the UK, Wired reported.

In May, for example, a Guardian report showed that meat and dairy production takes up 83% of global farmland despite contributing just 18% of calories to our diets, and that cutting these foods out was the "single biggest way" to reduce one's environmental impact.

Many coffee shops now stock a menu of nut and seed milks, making it easier than ever to make an ethical choice while enjoying your favourite beverages on the move.

But while 6,098 litres of water goes into a single litre of almond milk — which accounts for two-thirds of alternative milk sales — oat milk happens to require six times less water than almonds to grow.

If you own a blender, you can quite easily make your oat milk yourself, further cutting water and packaging inputs.

Photo by rawpixel on Unsplash


For many of us, coffee is the ignition switch of the day.

However, coffee is not something that grows on the hills of the Lake District or the South Downs; we must import it from countries like Colombia and Ethiopia.

But according to former chief executive officer of Fairtrade International Harriet Lamb, fairtrade and buying local are two sides of the same coin.

“You might for example want to buy your wonderful Somerset Brie locally,” Lamb said. “But really we don’t grow very much coffee or tea or bananas.”

“At that point, obviously you can go to Fairtrade, which is if you like a global version of ‘buy local’ because so much of Fairtrade is about buying more directly from the farmers themselves,” she added.

The aim of Fairtrade is to give producers better pay, and improve their life circumstances, for example through the Fairtrade Premium scheme whereby an additional sum of money goes into a communal fund for workers and farmers to use as they see fit.

Wouldn’t it be nice to think that while we boot-up in the morning over a cup of coffee we could be helping to build a school, or a dispensary? 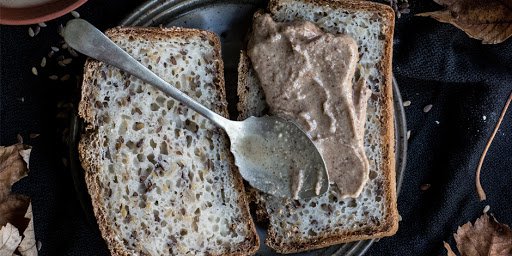 Photo by Monika Grabkowska on Unsplash

For a quick breakfast snack before rushing out the door, you can’t go wrong with peanut butter on toast, perhaps with jam.

Peanuts have a problem though: By themselves, they don’t make a particularly creamy butter.

This is why companies often include palm oil into the list of ingredients, despite a report from Greenpeace published on September 19 which found that palm oil suppliers to leading consumer brands had cleared 500 square miles (1,295 square kilometres) of rainforest in Southeast Asia since 2015.

Sadly, palm oil is not just found in peanut butter, but in over half of all supermarket products including everything from lipstick to ice cream to noodles and shampoo.

You can try out a few to discover your favourite consistency, or check out this HuffPost article in which the authors sampled a few different kinds to find the perfect guilt-free, but still creamy, peanut butter.

Photo by Brad Huchteman on Unsplash

Nature’s nectar. Honey is the golden elixir that crowns a bowl of morning porridge, or granola.

It can be easy to rely on organic certification when purchasing an ingredient we hope is ethical and sustainable. The situation of UK honey is difficult, however, as beekeepers here cannot sufficiently prove that their honeybees visit only organic flowers, and this denies them certification.

Organic honey purchased in a UK supermarket will therefore come from overseas, which can raise the issue of unecessary food miles.

Advice from Friends of the Earth suggests that we contact local UK beekeepers directly, such as at farmers' markets, and ask about their land and management practices.

Otherwise, if this is untenable, you might want to research that honey producers in other countries are paid a fair wage, and that harvesters take care of the bees and their environment in a sustainable way.

Ethical Consumer has scored and ranked the environmental record of 22 leading honey brands to help you choose the one that is right for you.