A crowd funding campaign is set to #putthembackup 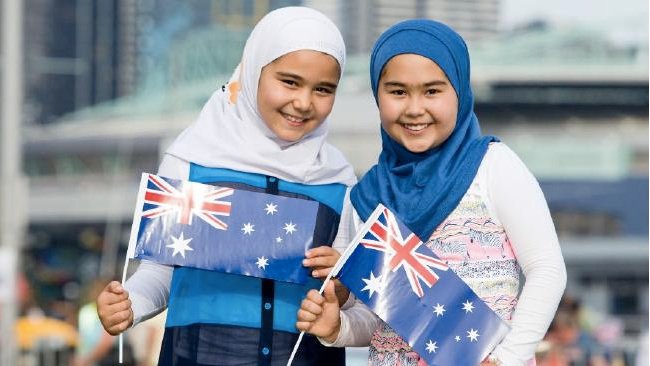 On Australia Day 2016 two young girls were celebrating in Melbourne with their families. The two friends had their picture taken and the photo was used for billboards to promote Australia Day celebrations for 2017.

The pair happen to be Muslim and are wearing hjabs in the image; their photo was chosen as a way to celebrate the diversity of Australia. However, sadly the billboard was met with a wave of islamophobia and threats of violence until it was taken down. On social media there were hateful outcries about how the photo was “un-Australian”.

Members of far-right social media groups posted things such as: “Those hijabs are offensive to me because of what they stand for.” Another commented: “They deserve abuse & threats.”

This is Australia NOT Saudi Arabia!

The families of the girls are now concerned about keeping their identity a secret and fear for their safety, reports The Guardian. The girls are very much aware of the fuss their photo has caused but can’t quite understand why it was taken down.

In response to the dismantlement of the billboards, advertising agency Campaign Edge have launched a crowdfunding campaign to #putthembackup.

The money raised will go to placing a full page press ad and a billboard. Although by the looks of things they may be able to purchase more than one billboard! The team behind the campaign are donating their time and any leftover funds will be donated to the Asylum Seeker Resource Centre.

I'm disgusted by campaign to take down Australia Day sign featuring Muslim women. Racism has no place in our society https://t.co/Lb7GHAs4h0

I support these ads. #OzDay is about celebrating not only our differences but the things we share: ie love for Aust! https://t.co/HjFPaJPs3J

A group in the local council where the billboard was first put up started a petition to have the billboards reinstated. The petition that states “Muslims are Australians too! We demand the reinstatement of the Cranbourne billboard featuring two girls wearing hijabs,” attracted over 4,000 signatures in less than 24 hours. A crowdfunding campaign hit its target of raising $50,000, blew through this goal in just 7 hours, and went on to raise more than $100,000, according to The Guardian.

For Australians to be true global citizens, Australia Day needs to be an inclusive celebration of the country’s diversity.