Barry Coates - "I love my job" 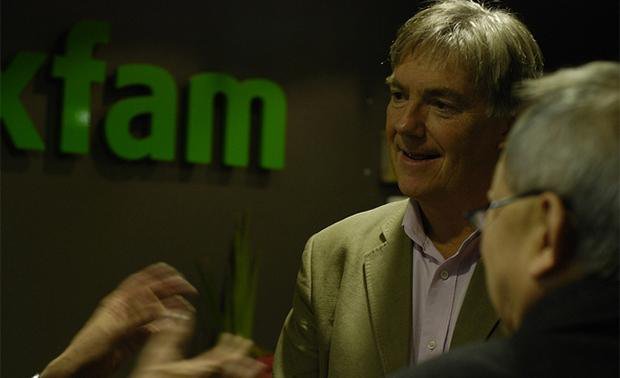 Earlier this month I caught up with Barry Coates, Executive Director for Oxfam New Zealand. We discussed what being a Global Citizen means to him, the big challenges facing the world right now, and how all us every day people can all be a part of the solution.

Oxfam are dedicated to fighting poverty and injustice. A more recent story that was in the news a lot was how Oxfam put an end toDole’s farcical advertising with “ethical choice” stickers on their bananas sold in supermarkets across New Zealand.

The Oxfam New Zealand-commissioned report found the company used underage workers at its plantations in the Philippines, forced them to work up to 12 hours a day and paid them less than the minimum wage.

Dole has since scrapped the "ethical choice" stickers on its bananas.

“This is why it’s so important to buy Fair Trade, or know where your food is really coming from. Retailers also need to take responsibility for their suppliers,” says Barry.

Sadly, a lot of people still have the attitude, But most of the big issues just seem too big. There’s nothing I can do about it.

“To use an analogy,” continues Barry, “tackling Climate Change is kind of like if the world were a plane, you’ve got all these first world citizens sitting right up in first class, and everyone else is in the back, and the tail of the plane has caught on fire. The citizens from the first world are ignoring the fire (that they started), saying it doesn’t affect them. But in fact it does, because in the end the plane goes down, we all go down.”

We also discussed the intrinsic link of Climate Change to poverty, and the injustice of poor countries paying the highest cost for the rich countries insatiable hunger for consumerism. Some nations, like Kiribati, are sinking. Can you even imagine, if 20-30 years from now, parts of New Zealand were under water? Where would you go? What would that mean to you? This is the reality that other nations face - this is the real face of Climate Change for many people in the Pacific.

“In New Zealand we need to write to the government, mobilise and make a much stronger stance to galvanise action on Climate Change,” says Barry. “And farmers need to take more responsibility for greenhouse gas emissions.”

Barry and his team at Oxfam have a lot of battles to win, but I don’t think I’ll ever forget that moment when I asked Barry what he likes best about his job.

“Oh I just love my job,” he says, beaming like a lighthouse. “Inspiration is a big motivator. I’m always inspired by the people around me.”

Barry shared a story with me that took place in Papua New Guinea’s conflict-ridden Highlands region, the stuff of goose bumps. The Kup Women for Peace started their work in the early 1990s following decades of armed fighting, fear, murder and rape. Having watched local conflict spiral out of control with homes, jobs and lives being destroyed, women from rival tribal groups in Kup rose above their fears and walked out onto the battlefields to talk peace. Of course they were scared, but they had already suffered so much devastating loss, they had to do something.

Someone had to do something.

They invited the tribal leaders in the district to a celebration they called “welcome home”. The tribes brought food and firewood, sitting down together to share a meal and afterwards raising a peace flag.

Oxfam understands from their research and experience that poverty exacerbates conflict. That’s why they’re helping families to access basic services like water, sanitation and healthcare, as well as helping people learn new skills and earn a decent living.  There are now eight schools, a hospital/health centre, a police station and even a cellular phone tower. People in Kup can now move freely across the land of different clans.

“I look at all the amazing people in impoverished communities, and what they are doing to better their lives and the lives of others, and it just proves that everyone is capable of doing something.”

The amazing work of Barry and his team at Oxfam will be profiled at the Global Citizen Concerton August 4th. Tickets and further information are available here.

To read more blogs like this one, head here.