Barbie is getting 3 new shapes, 7 new skin tones and an improved role as a truly global icon

When a doll is more than just a doll, it can shape the minds of the world. 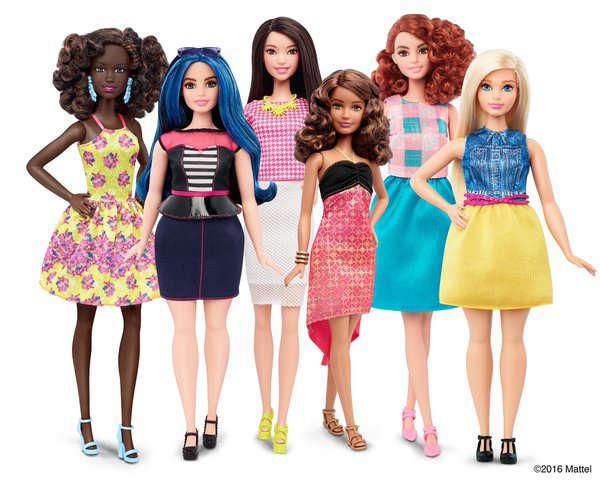 Barbie is getting a new look. The iconic doll will now come in 3 new “shapes” and in 7 different skin tones. Toymaker Mattel went all out with the announcement:

A change to a global icon of this magnitude is a big change for the image of girls and women in the world. The line is both more body realistic (though arguments can still be had about how realistic even the new ones are) and substantially more diverse. Mattel is catching up to the diverse world by giving young girls everywhere a vision of themselves within the iconic brand.

If you think the importance of this change is hyperbole on my part, you are underestimating Barbie’s global role. For one indication look no further than Time Magazine devoting their cover, and a substantial amount of the issues coverage, to the new dolls.

"Mattel has never attempted anything this drastic" https://t.co/YvYtt31VVzhttps://t.co/tI4YkB2oWJ

This is not the first time Barbie has changed its look (or if you prefer Mattel’s framing, “evolved). To put this in perspective, Time magazine did a great run down of how the doll has changed over the last 47 years.

Despite all the changes that Barbie has undergone over the years, a few things have stayed relatively consistent: white skin, an incredibly skinny waist, and overall proportions that are unrealistic. This has prompted critics to do a thorough analysis of the dolls proportions, coming away with results like “her 16-inch waist would also be four inches thinner than her head, leaving room for only half a liver and a few inches of intestine.” Or the damming conclusion that her proportions would require “her to walk on all fours.”

The unrealistic aspects of Barbie have long raised concerns that girls were being harmed, leading to long-term emotional problems and disorders.

Though not everyone agrees with these concerns.

It does seem, though, that Mattel agreed with (or at least heard) some of these concerns from their customers. According to the Time Magazine report on the launch of the new line, it came out of a leadership shakeup at the Toy maker.

After Evelyn Mazzocco became the head of the Barbie brand, she decorated her office with feedback from customers that included “out of touch, materialistic [and] not diverse.”

Mazzocco led an overhaul of the brand that resulted in today’s launch. Here is the company's run down of their motivations:

A #BTS look at what inspired us and the team that made it possible. https://t.co/JDeqzI59nX#TheDollEvolves#Barbiehttps://t.co/CmWHMcBOGf

The launch has been met with both positive and negative reactions, but overall many on the internet seem pretty happy about it.

Thank you @Barbie , I'm officially excited & proud to buy my daughter a barbie one day!

Thank you @Barbie for bravely acknowledging that women can be "Curvy," "Tall" or "Petite" & not just "Original" !!! pic.twitter.com/OWvONCsx7G

In absolute AWE of the beautiful new @Barbie dolls! Barbie really can be anything she wants to be #TheDollEvolves

And the increase in diversity seems to already be having an impact as a wide range of new people are seeing shades of themselves in the new Barbie dolls.

Y'ALL! THE SECOND FROM THE LEFT! Y'ALL IT'S LITERALLY ME IN DOLL FORM THOOOO @BARBIE#THEDOLLEVOLVESpic.twitter.com/2cr0Phqyqj

One interesting line of critique comes from some men who are reminding observers that it’s not just girls who have body image problems.

Barbie getting a makeover to improve body image in girls. But GI Joe will continue to make gay boys feel inadequate. #Barbie

Mattel’s President and CEO, Richard Dickinson told Time Magazine that he knows overall reactions are going to be personal to everyone.

“Haters are going to hate. We want to make sure the Barbie lovers love us more—and perhaps changing the people who are negative to neutral.”

A noble business proposition that seems to be working.

I was never a fan of #Barbie or dolls, but am happy to see a more diverse group of girls and body-types represented. https://t.co/VZ9sA0wtsf

But the global reach and power of Barbie means Mattel must continue with its wider goal. Dickinson told Time that the “brand represents female empowerment.”

Dolls may not seem the most obvious way to empower girls and women, but broadening a global icon to (at least begin to) represent the diversity of the world around us is a start.

And since this is about a marketing campaign, hopefully every girl can get Mattel’s latest message, even if it is in a corporate ad.

From Mermaid to Movie Star, Princess to President. With Barbie #YouCanBeAnything! pic.twitter.com/9BULbAzJUr