The Israel-Palestine conflict has been an abiding interest for Banksy. 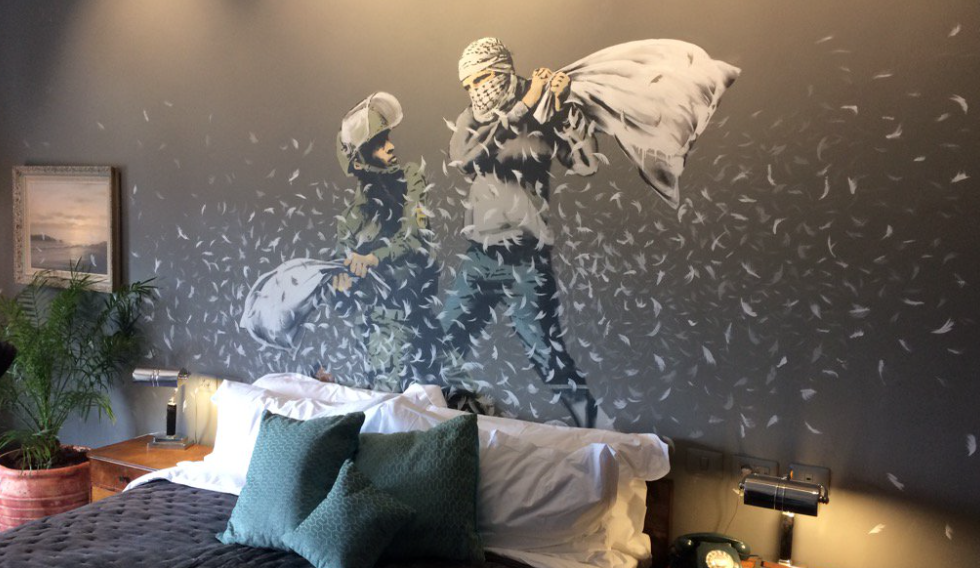 His latest project is no different. In one of the least hospitable, most claustrophobic places on Earth — Bethlehem — Banksy has built a small inn for people to visit and stay in.

The hotel is full of Banksy’s sardonic humor. Guests are invited to gaze at the West Bank Barrier wall, or the “worst view in the world,” and caustic artwork appears on walls. In the background of one painting, the words “Free Palestine” can be seen,” a sly nod to Banksy’s leanings.

The rooms are otherwise cozy, adding to the sense of surreality that pervades the place. There are normal hotel decorations, comfy beds, and peaceful lighting. Chefs will serve afternoon tea to any passersby interested in taking a look at the inn. There's even a museum and small shop next door that sells memorabilia.

Read More: Israeli Arabs and Jews Told to Kiss, What Happens Next Is Beautiful

"The worst view in the world" Banksy says of the view from his new hotel in Bethlehem pic.twitter.com/FQFQFWvCBJ

"Free Palestine" -- new #Banksy in the cinema of his barrier wall hotel pic.twitter.com/g54Svm5yv3

#Banksy posted tiny portion of this mural from his new hotel on Instragram this mornin. Here's the whole pillow fight pic.twitter.com/5GYin0n3pm

But all around “The Walled Off Hotel,” life is fraught with a brutal tension. The West Bank Wall, a leading symbol of division and oppression in the world, is right next door. People on both sides of the wall regard one another with a wariness that occasionally veers into violent hostility. And always in the background are the wars that inspired the wall and the wars that have been inspired by it.

Perhaps more than any other development in the region, the construction and maintenance of The West Bank Wall put an end to the “two-state solution” that had been pursued by much of the world to promote peace between Israel and Palestine.

Banksy wants people to think of this tangled and toxic history as they stay in the hotel and there will be exhibitions by young Palestinian artists to foster further discussion. Ultimately, like all of his work, he wants to spark difficult conversations that get people to question their perceptions and become more open-minded.

The Israel-Palestine conflict has been an abiding interest for Banksy. He traveled to Bethlehem in 2005 and 2007 to furtively put artwork onto the West Bank Wall. One piece involves two cartoonish armchairs next to a window showing a verdant world outside, but this otherwise sunny scene becomes a harsh commentary on willful ignorance when painted onto the grim wall.

After the Israeli-Gaza conflict, or "Operation Protective Edge," In 2014, he traveled to the wall to create a bitterly ironic tourism video using cliched tropes of the travel business. But the video ends on a sober note, with the camera focusing on a message spray painted onto the wall: “If we wash our hands of the conflict between the powerful and the powerless we side with the powerful – we don’t remain neutral.”

While Banksy has always been political in his actions — deriding power, subverting bigotry, mocking hypocrisy — his work has become more specific and more large-scale in recent years.

Read More: How Banksy Could Ignite Broader Help for Refugees

Last year, for example, he created a nightmarish theme park in the UK called “Dismaland” that drew attention to the ongoing refugee crisis around the world. He ultimately tore down the park to build temporary housing for refugees stranded in Calais, France.

Unlike this the theme park, the Walled Off Inn will likely be around for a while as an enduring challenge to the discord all around it.