Banks Are Stepping Up to Help Africans Suffering From Famine

Upwards of 26.5 million people could go hungry in the Horn of Africa. 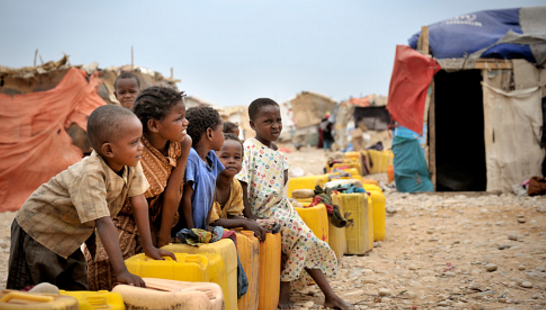 As food rations for 7.8 million Ethiopians dwindle due to funding shortages and Somalia teeters on the edge of its second famine in fewer than six years, development banks are filling in the gaps left by traditional donors.

In response to the crisis, the World Bank is donating $50 million to the International Committee of the Red Cross (ICRC) and the UN Food and Agriculture Organization to distribute emergency food, water and cash in Somalia.

In the Horn of Africa, a staggering 26.5 million people are going hungry — more than the populations of New York City, Los Angeles, Miami, Chicago, and Houston combined.

"We are demonstrating not just that we appreciate the kind of pressure that Somalia is facing but the importance of the humanitarian and development actors working together," said Mahmoud Mohieldin, a senior World Bank official.

The African Development Bank (ADB) has also announced it will give $1.1 billion to six countries, primarily in the Horn of Africa, that are struggling with drought.

For the third year in a row, a substantial lack of rainfall before November’s dry season led to widespread crop failure in multiple countries.

In South Sudan, where 5.5 million people are short on food, some areas are already suffering from famine, the UN said. In Somalia, 1.4 million children are expected to be acutely malnourished this year alone, according to UNICEF. In Ethiopia, 7.7 million people (and counting) require emergency food aid.

Farmers and livestock herders across the region have been left scrambling for food, water, and work.

As a result, the number of asylum seekers in East Africa has almost tripled to 4.3 million since 2011, Dirk-Jan Omtzigt, an analyst with the UN Office for the Coordination of Humanitarian Affairs in Nairobi, said.

"We have both the biggest food insecurity crisis and the biggest displacement crisis this region has ever faced," he added.

As people have searched for water, often only finding contaminated sources, the rate of contracted diseases has also increased.

An estimated 36,000 cases of cholera, including 697 deaths, were reported in Somalia in the first four months of 2017. A preventable disease, these numbers are more than twice what they were in the same time period last year.

During last year’s World Humanitarian Summit in Turkey, donors from around the world promised to make their funding more flexible in response to the growing humanitarian crisis.

In addition to funding, the World Bank has also begun to deliver aid in countries like Somalia and Yemen, Mohieldin said. But growing conflicts and political unrest have weakened their ability to reach those most in need.

As the famine worsens, public and private donors will need to work together to prevent a humanitarian crisis of incredible proportions.