She also fought for better workplace accommodations for families. 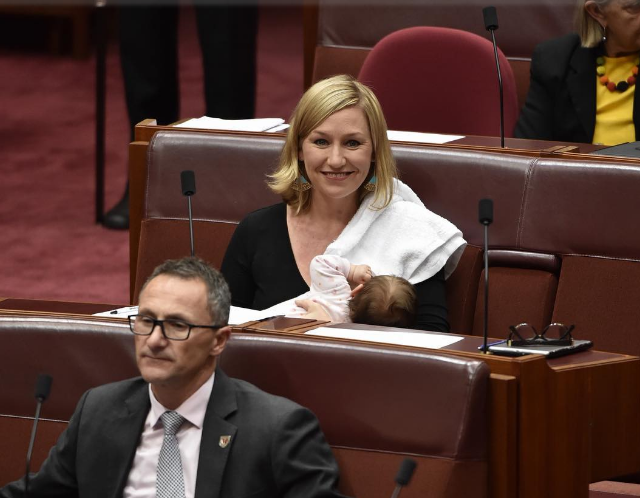 Larissa Waters knows what it’s like to be a working mom.

One of the leaders of Australia’s Greens party, Waters was back on the job today just weeks after giving birth to her daughter, Alia Joy. And so like many working moms, Waters needed to balance the demands of the job with the necessities of motherhood.

So today, Waters became the first woman to breastfeed in Australia’s parliament.

“Alia makes history! First baby breastfeed [sic] in the federal Parliament. We need more women in this joint!” she wrote on Instagram with a photo of herself and her daughter in the chamber.

“I am so proud that my daughter Alia is the first baby to be breastfed in the federal parliament! And we need more family-friendly and flexible workplaces, and affordable childcare, for everyone,” she wrote on Facebook.

The event was pre-planned by Waters and previewed by the Australian newspaper the Courier Mail, which showed Waters and her partner, Jeremy Gates, who is going to be a full-time dad to their daughter.

Waters actually helped broaden Parliament’s childcare rules last year. While breastfeeding was already allowed, she pushed to ensure that mothers and fathers would be allowed to care for infants while on the floor of the Parliament, according to the Courier Mail.

Just eight years ago, another Greens party member, Sarah Hanson-Young, had her daughter Kora, then age 2, taken from her and thrown out of the chamber, according to the Independent.

The reaction to Waters’ historic moment in Parliament today was enthusiastic. Commenters on her Instagram feed called the photo “beautiful and perfect” and said, “Let's hope this catches on everywhere in every work place!”

Read More: Giant Boob Pops Up in London to Make a Big Statement About Breastfeeding