A new report has revealed gender pay gaps still exist across “every industry and occupation.”

Why Global Citizens Should Care
Women are stifled and discriminated against not only by workplaces, but also by health systems and governments. Gender equality is at the very heart of human rights. Global Citizen campaigns for equal opportunities for all. You can take action here.

The agency’s latest report elaborated that over the past year, Australia’s pay gap has decreased by the largest drop in a single year in recorded history at 1.1%. The pay gap, however, actually went backwards across the construction, accommodation, food service, and health care industries. Across the economy, the report disclosed that men still earn on average $25,717 a year more than women.

“Our data shows that change is happening in Australian workplaces,” Workplace Gender Equality Agency Director Libby Lyons told SBS. “In some areas, it is happening quickly. In others, it is far too slow. Pay gaps persist in every industry, occupation, and manager category.”

The 1.1% pay gap drop, Lyons stated, could be due to the increasing number of companies which have taken initiative and implemented gender equality strategies through their organisations. Sixty-one percent of organisations reported having a formal policy on remuneration, an increase of 3.2% in the past 12 months. Of these organisations, 40% included pay equity in their remuneration policy.

Individual employees calling for greater gender equality action have been praised for the increasing trend.

"We have clear evidence that employer action delivers real results and we should recognise the great work many employers have done,” Lyons said in a media release. 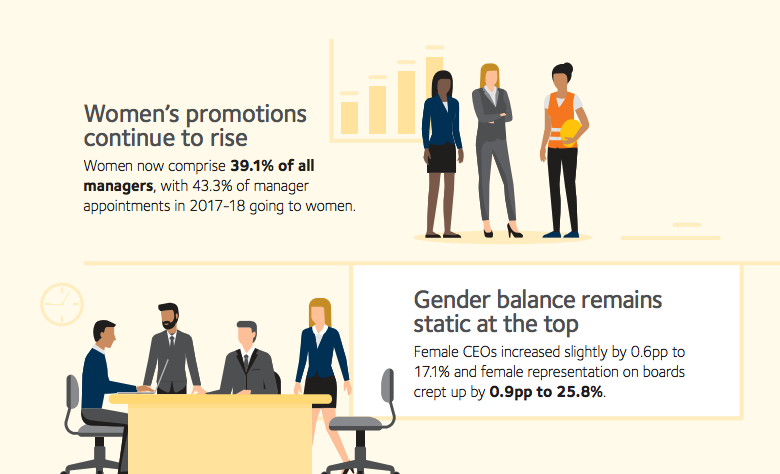 
The lingering pay gap disparity has been linked to a disproportionate salary bonuses, base salary gaps, general discrimination, and the percentage of women working in unpaid caring and domestic work. The gap is widest among the financial industry and construction industry, with an average gender remuneration difference of $48,884 and $39,950, respectively.

Minister for Women Kelly O’Dwyer told The Australian the pay gap will decelerate once gender norms shift and men are able to take further time off for family duties. Ultimately, O’Dwyer announced that while there was a lot more work to do, the report was positive.

"We can be proud of the fact it is trending in the right direction," she said.

TopicsAustraliaGender Pay GapGirls and Women
The Australian government’s Workplace Gender Equality Agency has disclosed that across the economy men still earn on average $25,717 a year more than women.
rawpixel Unsplash