Why Global Citizens Should Care
Gender discrimination continues to stifle women throughout politics in Australia. Girls and women deserve, and now demand, to be treated as equals. Global Citizen campaigns on the UN Global Goals, including uplifting the voices of women and promoting diversity. You can take action on gender equality issues here.

Stares of disbelief and exclamations of dismay occurred during a senate estimates hearing this week after Australian Liberal Democrats Senator David Leyonhjelm posed a series of comical and unfounded questions.

Leyonhjelm’s initial question was directed to First Assistant Secretary of the Office for Women Trish Bergin. Would Bergin’s work, Leyonhjelm pondered, be "undermined if there was also an Office for Men?” Greens Senator Larissa Waters interjected before Bergin could answer, frankly telling Leyonhjelm that an Office for Men already existed.

"It’s called our Parliament,” she announced.

Undeterred, Leyonhjelm continued. Next, he pressed Bergin as to whether the Office for Women "could be assisted by an Office for Men." Leyonhjelm furthermore questioned whether an office that worked to safeguard “men and their children from violence” would be complimentary or competitive.

"You realise most perpetrators are men?” she asked Leyonhjelm. “That’s kind of the point.”

Women in federal parliament – 33%
Women affected by domestic and family violence – 33%
Gender pay gap – 14.6% (or 22.4% if you include total remuneration)
Need for the Office for Women – 100%
Credibility of Senator Leyonhejlm's call for an Office for Men – 0% pic.twitter.com/OAqQD364mK

The discussion reached a climax during Leyonhjelm’s final question.

“Are there any instances where your office could be seen to be improving the lives of Australian women at the expense of Australian men?” he asked.

This is not the first time Leyonhjelm has made arduous comments. Earlier this year, Leyonhjelm told Greens Senator Sarah Hanson-Young that she should “stop shagging men” after Hanson-Young spoke about the percentage of male rapists as part of a women’s safety debate. Leyonhjelm, to this day, has refused to apologise. Similarly, in July, Leyonhjelm tweeted at STUDIO 10 host Angela Bishop calling her a “bitch”. 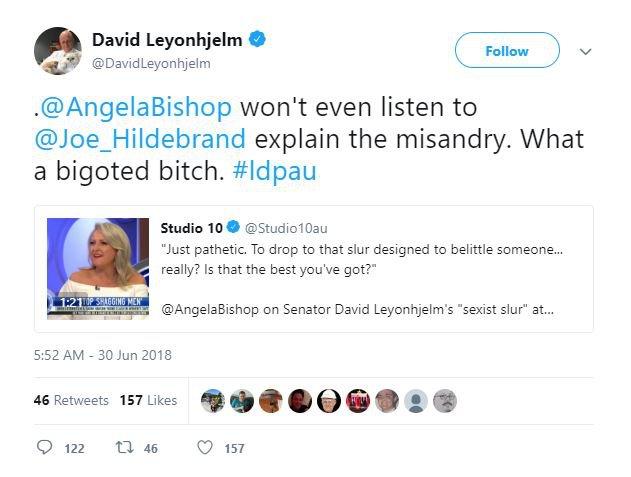 In the days following the heated senate hearing, Waters shared footage of their discourse on Twitter. Below the video, Waters wrote a caption detailing statistics relating to women’s representation throughout the federal parliament and the true need for the Office for Women.