Where in the world do food and conflict overlap?

Growing food is hard. Drought, urbanization, climate change, soil erosion and other factors impede the ability to produce food. Even trying to cultivate herbs on your fire escape, as my colleague Gus points out here, can be a challenge.

However, there is one barrier that stands above the rest, making it nearly impossible to cultivate food: Conflict.

If you take a look at a map of areas with high rates of hunger in the world, there is usually conflict taking place. Here’s a map of malnourishment in 2015 from the World Food Programme:

For a full in-depth look at this map. Click here.

And then take a look at conflict around the world: 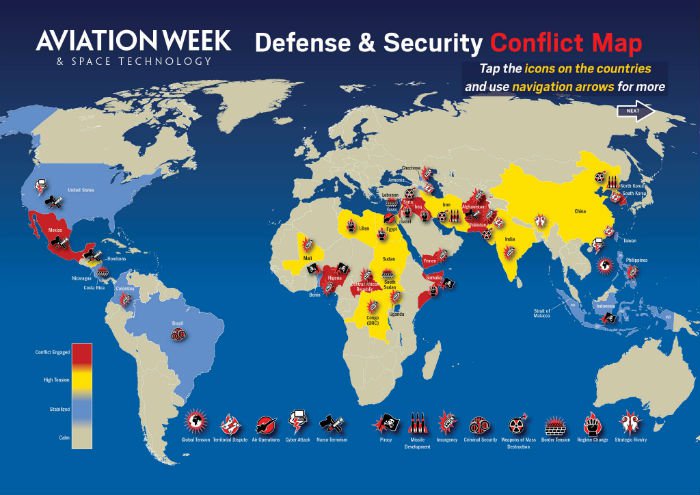 Or maybe take a glass half-full approach and check out where countries are more peaceful:

Either way there is an undeniable correlation between hunger and conflict. Maybe this seems obvious. Of course countries with ongoing armed conflict are going to be negatively impacted in many ways, and food production is one of them. But it matters because it’s not just food supply that’s affected--it’s people’s lives and livelihoods too. And it’s a growing problem.

In fact, the World Hunger Index for 2015 focused on armed conflict and the challenge of hunger.

Well, it means less people in the world are able to lead happy, healthy lives. Less people can go to work and school, drink clean water, eat nutritious food, or grow food to sustain a livelihood. Farmland becomes difficult to protect, animals are stolen, and crops are destroyed. In addition, public markets are a challenge to maintain as conflict rises and people flee. Overall, conflict breaks down the very infrastructure that allows agriculture to exist.

So, where in the world are hunger and conflict synonymous?

Syria, Iraq, and Afghanistan, in that order, are the least peaceful countries in the world right now according to the Global Peace Index. Hunger has either increased or not improved in each of these countries.

While the majority of the world’s countries have reduced rates of hunger, countries struggling with conflict have made little progress. Iraq, Pakistan, and the Central African Republic decreased hunger levels by less than ten percent according to the World Hunger Index for 2015. And Iraq, as you already know, is not so peaceful. Where does Pakistan and the Central African Republic rank?

So there’s definitely some correlations going on here. But let’s not dwell on the negative.

What can be done to help farmers in conflict zones?

Investing in “conflict-resilient agricultural programs” is one solution suggested by this study. What does that mean? Programs to help farmers when conflict puts their livelihoods at risk include increasing fisheries and aid in maintaining input and output sources via resilient markets. This approach to humanitarian aid will also not only help provide local food supplies to communities in conflict zones but also save farmers from losing their jobs, land, and livelihoods.

Food, hunger and conflict don’t always have to be linked together. With innovation and development in agricultural technology farmers can produce higher yields. And if conflict aid organizations focus on education, and sustaining livelihoods to as much extent as possible in conflict areas then just maybe the world won’t look at hunger and war as one in the same.

You can also go to TAKE ACTION NOW and sign this petition to help change food aid reform.