This springer spaniel may have a solution to the United Nations’ emergency superbug meeting Sept. 21 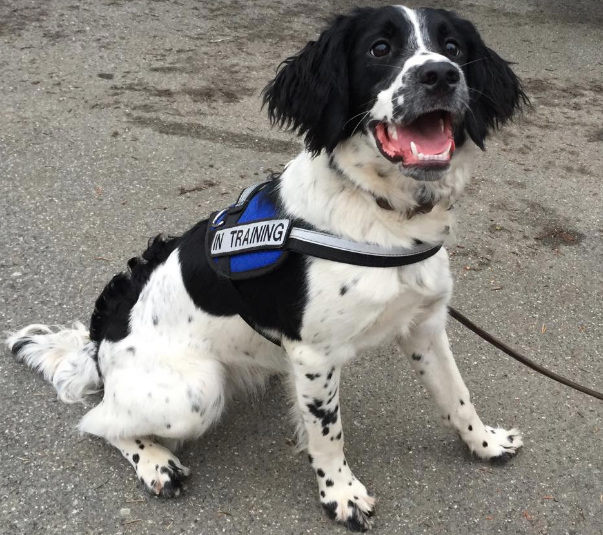 The United Nations will gather its entire General Assembly next week for an emergency meeting to discuss antibiotic-resistant superbugs. When they do, the name of one leading expert in the field may come up: Angus, the superbug sniffing dog.

At Vancouver General Hospital, Angus, a springer spaniel, has been trained to sniff out a superbug known as Clostridium difficile, or C. diff, a “hazard-level urgent” bacteria that is often found in hospitals, is highly contagious, and can be hard to detect and fight, according to CBS News.

“It will always be present in your hospital, so what you’re trying to do is control it. That’s where Angus comes into play,” Elizabeth Bryce of the Vancouver Coastal Health Infection Prevention and Control toldCBS.

Read More: One More Reason To Be Careful With Antibiotics: Obesity

Angus is part of a pilot program at VGH to see if having a trained bacteria-sniffing animal can help prevent the spread of disease.

“He’s trained to detect C. difficile in the environment. The advantage for us is, if he alerts on something, then what we can do is additional targeted cleaning and we’re going to couple it with our ultra-violet disinfection machines,” said Bryce, who did not immediately respond to requests from Global Citizen for comment.

Read More: Are We Entering a Post-Antibiotic Age?

Angus’s trainer, Teresa Zurberg, was busy training dogs for bomb- and drug-sniffing jobs when she came down with C. diff and nearly died three years ago, according to the report. Her husband was a nurse at VGH and came up with the idea for training a dog to sniff out the bacteria.

“I said, ‘If it’s got an odor, I can train a dog to find it,’” Zurberg said. “They definitely thought it was out-of-the-box thinking. And it helped that Angus was kind of cute.”

Now, Zurberg tests Angus by hiding positive C. diff odors in a room and having him locate the sources; his accuracy is between 95 and 100 percent, according to the report. Angus’ brother, Dodger, is being trained to follow in his brother’s footsteps, Zurberg said.

”We’re happy to help anybody try and get their own C. Diff dog,” Zurberg said. “What we can use them for, it’s only limited by our imagination.”

Angus and Dodger are just two possible solutions to the superbug problem that the United Nations will discuss on Sep. 21, just the fourth time in history that the General Assembly will convene to grapple with a health issue, according to Scientific American. The other three were for HIV, noncommunicable diseases, and Ebola.

The problem has grown in visibility recently. In May, UN member states endorsed a global action plan aimed at tackling resistance to antibiotics. In the US, 2 million people are infected with antibiotic-resistant diseases each year, 25,000 of whom die. And by 2050, superbugs could kill 10 million people per year if they are not stopped.

Ezekiel Emanuel, chair of medical ethics and health policy at the University of Pennsylvania, told Scientific American that the fact the UN was calling such a high-level meeting “is a clear recognition that this is a worldwide threat to everyone and worldwide action is what we need to address it.”

The GA is also expected to hear about research on other solutions to the superbug crisis, including a new generation of antibiotics, reinforced antibodies, and medications that change humans’ immune response to diseases as possible solutions to the problem, according to the report.