Actress and special envoy for UNCHR speaks on the 5th year anniversary of the Syrian Civil War.

Angelina Jolie-Pitt made an emotional statement pleading with world leaders to step up and help the millions of displaced refugees fleeing Syria. She made the statement during a return visit  to refugee camps in Bekaa Valley in Lebanon, as the special envoy for the United Nations refugee agency.

This year marks the 5th anniversary of the Syrian Civil War. Today, there are 4.8 million Syrian refugees in this region, and 6.5 million people displaced inside Syria.

The number of refugees in Lebanon living below the minimum threshold for survival– unable to afford the food and shelter they need to stay alive – has doubled in the last two years, in a country where 79 percent of all Syrian refugees are women and children.

On the trip to Bekaa Valley, Angelina Jolie Pitt was reunited with the family of a Syrian girl named Hala. She first met the girl in 2014 during a trip for the United Nations High Commissioner for Refugees.

Image: Reuters via The Guardian

Hala and her family welcomed the actress into their makeshift home for a small dinner within their refugee tent. A source told PEOPLE, that the group sat on the floor together, ate together, and colored while talking. Hala shared her dreams of returning to Syria, while her father, Nemer, told Jolie Pitt he wants to acquire a vocational skill to use upon their return.

Most poignantly, Hala told Angelina that she wants to return to the country to place flowers on her mother’s grave. 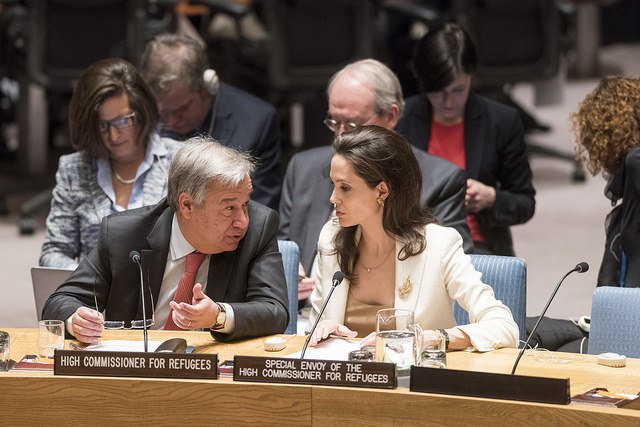 After reuniting with Hala’s family, Jolie Pitt spoke to world leaders through an assembled group of press. She called on leader to do “more than simply protecting your borders or simply putting forward more aid.”

She specifically asked leaders to look at the global refugee problem. “We have to understand the fundamental realities that are driving the global refugee crisis – which is the product not just of the Syrian civil war, but of decades of open-ended conflicts or persecution: in Myanmar, Mali, the Central African Republic, the DRC, Nigeria, Somalia, South Sudan, Afghanistan, Yemen, Iraq, Syria. I could go on.”

The actress reasoned that in conventional times of war, displaced persons or refugees would often go to more stable areas, or to neighboring countries for sanctuary, or were provided for in refugee camps until it is safe to go home.

But today, with 62 million displaced there is “no way that the governments of the world– no matter how rich or willing they are – can prop up the UN enough to care for all these people permanently.”

Angelina then condemned the actions taken thus far, where politicians hide behind aid relief instead of looking to find real diplomatic and systematic solutions.

“We cannot manage the world through aid relief in the place of diplomacy and political solutions.

“We cannot discuss this as if it were a problem confined to the situation of tens of thousands of refugees in Europe.

Jolie Pitt offered that world leaders should look at the root of the problem, understanding that this requires a heavy dose of courage and leadership.

“In my view, leadership in this situation is about doing more than simply protecting your borders or simply putting forward more aid, it means taking decisions to ensure we are not heading towards an even greater refugee crisis in the future.” 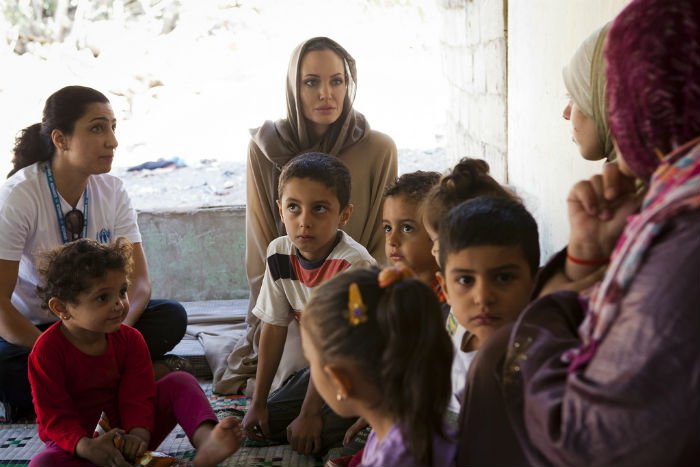 Angelina’s speech was so impactful because of her understanding of the fear people have regarding the refugee crisis and their own communities.

She addressed these fears by claiming, “It is not wrong to feel unsettled face by a crisis of such complexity and such magnitude. But we must not let fears get the better of us. We must not let fear stand in the way of an effective response that is in our long-term interests.”

Jolie Pitt wrapped up her powerful press conference by calling on world leaders to to analyze the situation and understand exactly what their country can do to help and how many refugees they can assist. She urged them “to explain this to their citizens and address fears – based not on emotion but on a measured assessment of what can and must be done to share the responsibility and get on top of this situation.”

She also spoke directly to global citizens by urging that, “We can do the right thing by refugees and build a more secure international environment. We can build order out of chaos.”

Angelina Jolie Pitt closed with her said hopes that she will return to Syria a year from now, to find a country at peace.