Open Letter to Trump: Executive Order Erodes Trust in US Around the World

“When we succumb to fear, we surrender our humanity. “ 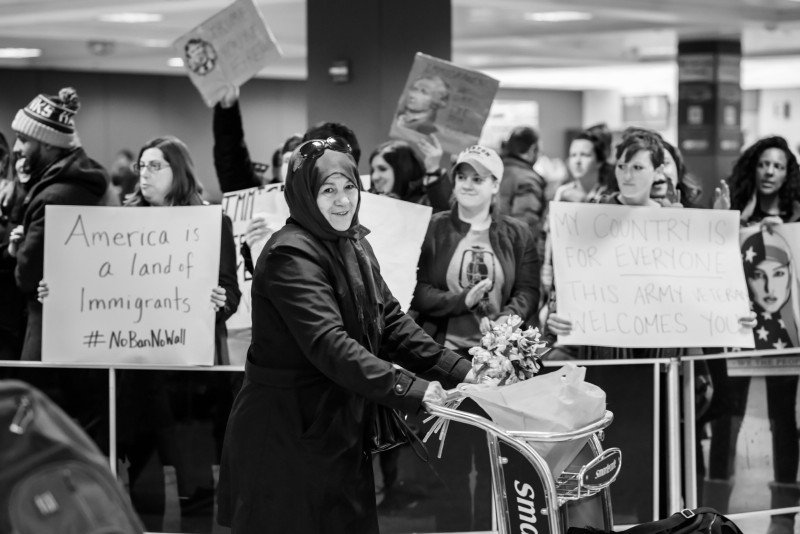 More than 170 social entrepreneurs and leaders of non-government organizations have released a letter expressing strong disagreement with President Trump’s Executive Order banning individuals from seven Muslim-majority countries from entering the United States. The organizations these leaders represent are on the front lines of social change every day, working in countries around the world to promote opportunity, sustainability, and peace. The President’s executive order is a setback for their work on behalf of marginalized people not only in the seven countries currently affected, but, by eroding trust in America, around the world.

Below are quotes from three of the letter’s signatories sharing why they felt it was important to speak out in unison with dozens of their colleagues against the President’s action.

John Wood, Founder, Room to Read: “Room to Read has always stood on the side of the underprivileged and marginalized. With Room to Read program operations and hundreds of local staff in many Muslim-majority countries, it is incumbent upon me as a social entrepreneur to reinforce our organizational values of diversity and inclusivity by signing this open letter. ”

Sally Osberg, CEO, Skoll Foundation: “When we succumb to fear, we surrender our humanity. Welcoming diversity binds us to the human family.”

Wendy Kopp, CEO and Co-Founder, Teach For All: “I am so fortunate to live in a country where freedom of speech is a cherished right -- and today I, along with more than 175 fellow social entrepreneurs, choose to exercise that right to stand up against an action that sets back our collective work to foster opportunity, equity, and justice.  This action causes needless suffering among refugees and hundreds of thousands of Muslim families, normalizes bigotry, and creates fear and division in communities here and around the world.  It’s also painful to see the degree to which this executive order has decreased trust of Americans and set back our reputation around the world as a country of people who value diversity, inclusiveness, and opportunity for all.”

As leaders who have spent our careers pioneering innovative solutions for many of our nation’s and the world’s most entrenched challenges, we write to express our unequivocal disagreement with your Executive Order issued on January 27, 2017, which banned individuals from seven majority-Muslim countries from entering the United States. We believe the order violates one of America’s most closely-held values to block entry to a targeted minority, whether comprised of temporary visitors, immigrants, or refugees. This is especially true for those who live on the edge of survival in war zones and refugee camps and have waited for years to call this great country their new home.

Groups like ours exist to help lift up the poorest and most marginalized with innovative solutions. In our opinion, this ban will make our work to foster peace, sustainability, opportunity and inclusiveness much harder. This action has unfortunately intensified fear, bigotry, and division in communities across our nation and the world, giving our organizations still more challenges to overcome. It has also decreased trust of Americans as we travel — it conveys that America is a country that no longer values diversity but operates from a place of prejudice.

We believe that immigrants and visitors from these nations should be allowed into the US to help increase the efficacy of the work we do to build peace and prosperity both at home and around the world. Collectively, we employ tens of thousands of people, and we have always found that the most powerful solutions for societal ills only emerge with the intimate involvement of those whom we work to serve. Diversity is the lifeblood of social, economic, and political progress, and policies that impede this value weaken our ability to innovate and implement social change.

We fear that such policies limit opportunity, inclusion, and our nation’s opportunity to engage with the world. We stand with the millions of people around the globe who have joined hands in resistance to efforts to sow fear and create false divisions along the lines of religion, ethnicity, country of origin, gender, or any other degree of difference.

You have expressed skepticism about the government’s abilities to solve problems alone, so we hope you will listen to the voices of those of us who lead organizations on the front lines of social change each and every day, using business best practices and often partnering with government. We respectfully request, Mr. President, that you do not deny us the right of welcoming people, regardless of their religion or nationality, to our shores. We must continue to communicate the values of inclusiveness and opportunity for all, values that our nation has always worked hard to live and to model.

The full list of signatories is posted on Medium http://bit.ly/2k7J09g.