"The human connection is very strong." 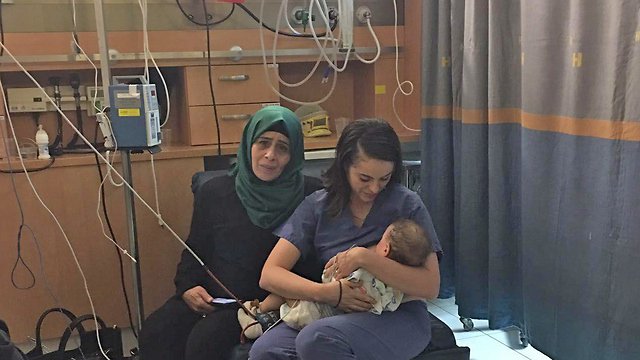 For a heroic nurse in a Jerusalem hospital earlier this month, one of those times arrived as she showed up at the hospital for her night shift.

Earlier that day a deadly car crash had killed a Palestinian man and sent his wife to Hadassah Ein Kerem Medical Center in Jerusalem with a critical head injury. The couple’s baby, Yamen, had only minor injuries, but with his mother unable to feed him, he had no source of food, according to NBC News.

Yamen’s aunts arrived at the hospital and tried to feed the 9-month-old with a bottle, but he would not take it, and they were forced to sit and watch for seven hours as he cried in hunger.

That is, until Ola Ostrowski-Zak arrived for work that night. The Israeli nurse said she immediately knew she had to do something.

“I thought to myself, ‘I must help this baby,” she told The Today Show.

Ostrowski-Zak, who has an 18-month-old baby at home, decided to feed the 9-month-old Palestinian baby herself.

After Yamen fed and calmed down, his aunts hugged and thanked Ostrowski-Zak for being willing to feed a Palestinian baby, according to the report. The nurse then posted to Facebook asking more women to volunteer to help feed little Yamen, and more than 1,000 women responded that they would drive to the hospital to help.

“This story represents the real Israel,” Ostrowski-Zak said. “Any mother in Israel would have helped him. The human connection is very strong.”