An approach to ending poverty that works

Let's imagine a world where we all thrive.

Ending extreme poverty by 2030 is the BHAG – the big, hairy audacious goal – of our generation. While skepticism abounds, momentum is on our side, with poverty rates falling in every region of world.

Unfortunately, these trends still have little to no impact on the lives of a critical and chronically marginalized subset of the extreme poor around the world, those living on less than 60 to 70 cents per day. At BRAC, where I work, we call this subset the “ultra-poor.” Microfinance and other market-based interventions don’t generally reach them. Predominantly women, they face chronic food insecurity, malnutrition, gender discrimination and often abuse. They also bear the brunt of climate change— especially in rural areas where inclement weather and the increasing frequency of storms can hurt agricultural yields and contribute to malnutrition — not to mention countless other external challenges.

If we’re to end poverty, we can’t ignore them. All of us — researchers, policymakers, governments, social entrepreneurs, nonprofit development groups, microfinance institutions, corporations, and philanthropists — have a role to play in bringing them into the widening zone of prosperity. And we may have found a way to do this.

BRAC began grappling with the problem of the ultra-poor in the 1990s. Despite decades of success fighting ill-health, illiteracy, and poverty, BRAC saw its programs still weren’t reaching women trapped in this chronic cycle of dire poverty.

We tested different approaches and in 2002, we began deploying a new set of interventions now known as the “graduation” approach, which provides these women with a host of services and benefits to move them out of ultra-poverty and eventually into sustainable livelihoods. That methodology has in turn been tested by other nonprofit organizations in other contexts, with pilots in eight countries as varied as Yemen, Ethiopia, and Haiti, with support from the World Bank’s Consultative Group to Assist the Poor, the Ford Foundation, and the MasterCard Foundation.

Our research has shown that the vast majority of participants in these programs – 75 to 98%, depending on the geography – not only leaves the category of ultra-poverty within 24 months, but remains on an upward trajectory even four years after they’ve stopped receiving direct benefits.

What sets the graduation approach apart from other attempts to reach the poorest is, in part, the mixed methods used. Discussion abounds in the development sector today about the best ways to empower the poor. Do you give them cash or assets? Is it better to attach conditions, or do the poor know best how to spend their money? BRAC’s short answer to these questions is yes, all of the above. That’s why we’ve taken a multi-intervention approach.

And perhaps we’ve overlooked the most important question of all: Are we really reaching those most in need?

Targeting is crucial. We need to make sure scarce resources are deployed efficiently. To do this, BRAC first identifies regions with high concentrations of ultra-poor. Then, using a method called “participatory wealth ranking,” we establish a group of 40 to 50 villagers and community leaders who rank the wealth of each household in the area. Community members outline their own criteria and identify the poorest living among them. BRAC staff then goes door-to-door to visit selected participants and verify their circumstances with questionnaires. These surveys vary by region, but may include how many meals she eats a day, number of people in her household, access to clean drinking water, etc. Including the community in this process also fosters a support network for participants as they go through the program.

From there, participants receive set of six interventions over the course of 24 months. They get a productive asset, like a goat or a cow; intensive hands-on training that includes livelihood training to maximize revenue from their asset and in-person coaching in the form of a weekly visit from a BRAC worker; a weekly cash stipend to give them some breathing room while they learn their new livelihood; healthcare recommendations; and financial planning services with additional support from the community. 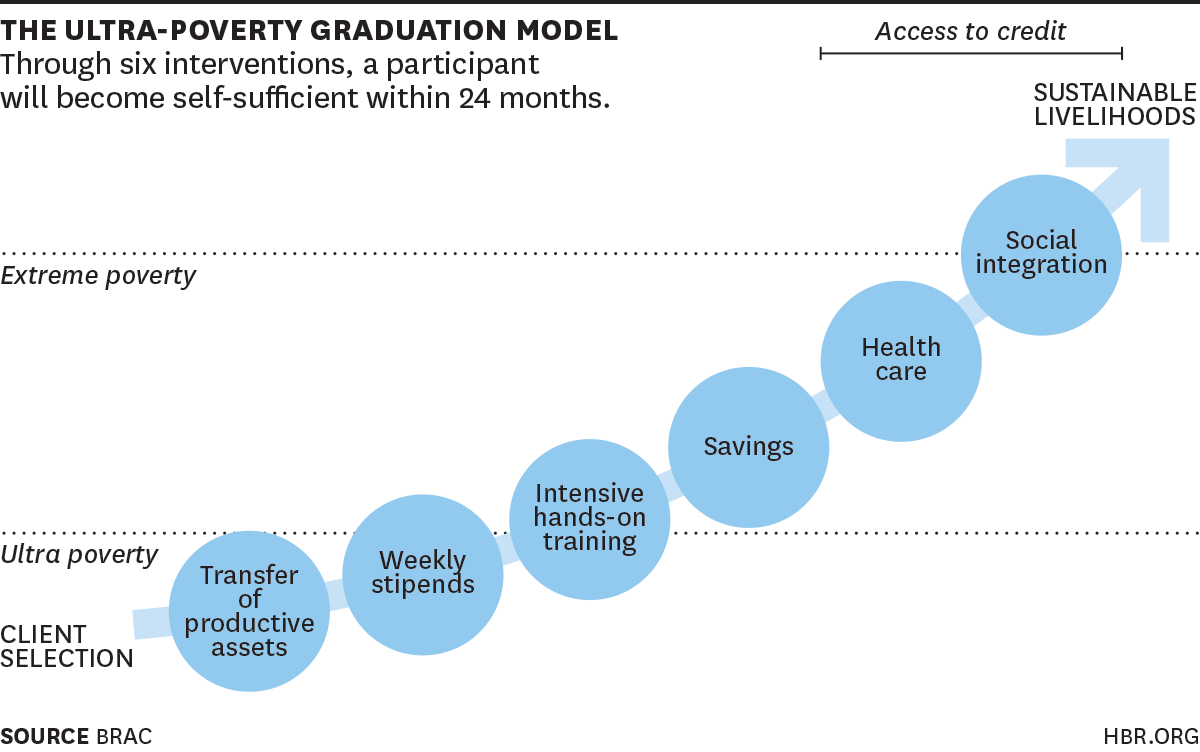 It is an intensive, integrated approach that works. It probably sounds expensive, too, but it isn’t as costly as one might think. It costs less than $500 per person for the full two years in Bangladesh. The long-term drag of not intervening — namely that of malnutrition, resulting in stunted growth and intellectual development, untapped labor potential, and so on — is estimated to cost $3.5 trillion each year, 5% of the global gross domestic product. To put things in perspective, reaching every ultra-poor family in Bangladesh (6 million families or 17% of the population at $500 per household) would cost the country $3 billion, less than .5% of GDP over six years.

Munshi Sulaiman, previously a researcher at BRAC and now pursuing post-doctoral studies at Yale, is looking at the cost-effectiveness of graduation-style programs in several countries. He is authoring an as yet unpublished study comparing these programs to 50 other government and NGO livelihood and cash transfer programs in Asia, Africa and Latin America.

Dozens of governments are now looking at ways to integrate graduation programming into their social protection policy and efforts. The Kenyan government recently hired BRAC to assess the viability of the graduation approach in some of its most difficult, climate-change prone areas where droughts have caused displacement and food insecurity.

I’d like to see the private sector, philanthropists, and social entrepreneurs throw their weight behind this idea to end poverty for all.

There’s a lot of talk about resilience in the world these days; the ultra-poor are the paragons of resilience. We need to tap into their creative power. We need to imagine a world where they don’t just survive – they thrive.