Aluminum Might Be the Best Plastic Alternative We Have

Why Global Citizens Should Care
Plastic pollution is causing immense harm to the world’s ecosystems, and governments around the world are beginning to curb plastic production in accordance with the United Nations’ Global Goals. You can join us in taking action on this issue here.

Aluminum is having a bit of a renaissance. The most common natural metal in the earth's surface has long been used in everyday life for everything from soda cans to construction beams.

But now aluminum's versatile nature is being touted by environmentalists as a viable alternative to single-use plastic, which has become one of the world’s most detested environmental pollutants. In recent years, people have staged strikes against plastic, promoted reusable materials, and participated in massive plastic waste clean-up efforts.

The coconut water brand Vita Coco, for example, recently unveiled a new aluminum bottle of water called “ever & ever” to highlight the fact that aluminum is infinitely recyclable. The bottle is a “love letter to aluminum” and lets consumers know that 75% of all aluminum ever made is still in use today.

“This bottle-can will go on to become a pirate’s book in a local production of treasure island, soothing wind chimes, a custom spinning hubcap, and then another bottle-can,” the bottle says.

While that’s a cute path that it might take, it’s not an exaggeration. Aluminum retains its properties throughout its life span — which is essentially indefinite.

It’s important to note that aluminum isn’t the holy grail of sustainability. Cultivating and processing virgin aluminum takes enormous amounts of energy, which makes recycling so critical. That’s why Novelis, the world’s largest aluminum recycler, recently invested $260 million in developing a plant to create cans that are 90% recycled aluminum. 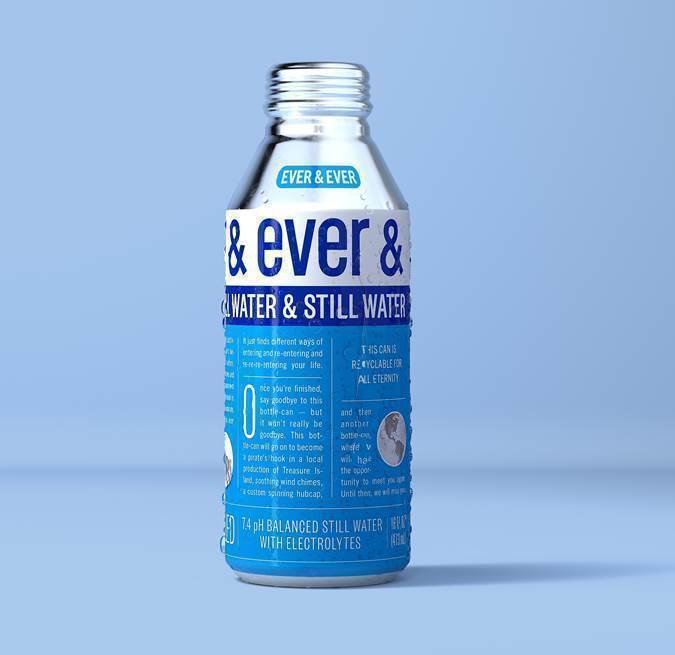 But plastic, on the other hand, has almost no environmental upside. In addition to consuming lots of energy, its quality degrades almost as soon as it becomes a product. Many common kinds of commercial plastics are difficult to recycle, either because they're made of multiple types of plastic that are hard to separate, municipalities don’t have the right facilities to process different kinds of plastic, or the plastic gets dirty and contaminated en route to a facility, rendering it useless. As a result, most recycled plastic undergoes a phenomenon known as “downcycling,” meaning it becomes less useful until it can only be thrown away or burned.

In fact, only 9% of plastic gets recycled.

Read More: 5 Plastic Alternatives Doing More Harm Than Good — and What to Use Instead

While 75% of harvested aluminum is still in use today, that number could be higher if reliable recycling systems had been in place over the past century, Pitre said.

Today, most countries have the capacity to collect and recycle aluminum and encourage its reuse, meaning that almost all new aluminum will end up recycled once it reaches the end of its first product state.

It’s not that aluminum is a fringe consumer product packaging that’s breaking onto the scene. After all, it’s used by some of the world’s biggest beverage brands.

But many companies that rely on plastic packaging are searching for alternatives as the scale of the global plastic pollution crisis becomes apparent.

More than 8.3 billion tons of plastic have been produced since 1950. Nearly 75% of this waste has been thrown away, and the vast majority ends up in landfills or contaminating ecosystems.

The oceans in particular have been especially hard hit by plastic waste. Marine animals as small as amphipods and as big as whales have been harmed by plastic, and there are an estimated 5.25 trillion pieces of microplastic — that leach chemicals into the water — in the oceans, where they are regularly consumed by animals and work their way up the food chain, eventually ending up on the dinner plates of people.

Read More: The 10 Best Ways to Reduce Your Plastic Footprint, According to Science

Dozens of countries around the world have restricted plastic production to some extent to deal with this crisis and international bodies like the United Nations have brokered agreements to end plastic pollution in the oceans.

But for the fight against plastic to be won, less single-use plastic has to be created in the first place.

And that’s where aluminum can play a role.

“There are so many areas where people want to be plastic free and they don’t have that many choices,” Pitre said. “Aluminum is such a great example of a circular economy using the same material over and over again.

“The last thing we want is for people to feel fatalistic,” she said. “If we can find ways to make people feel powerful and give them constructive things for them to do — that’s really exciting.”