“I liked her from the beginning.” 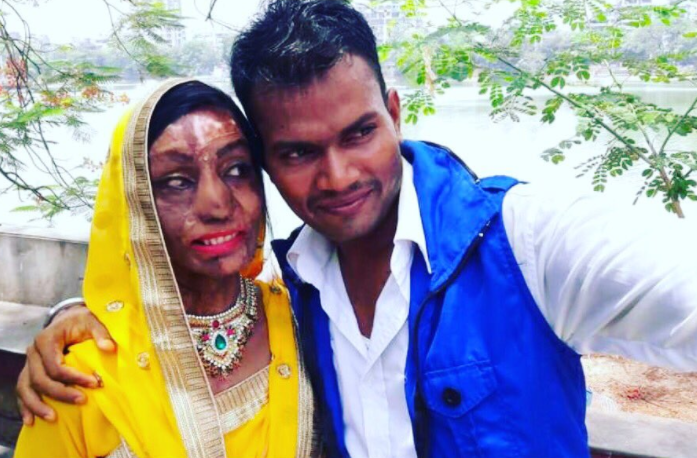 Five years ago, following a minor argument with her cousin, Lalita Ben Bansi feared for her future.

During the argument, her cousin threw acid in her face, burning her skin and causing extensive scarring. More than 1,500 women a year globally are the victims of acid attacks, and many of them happen in Southeast Asia and specifically India, where Bansi lives, according to the BBC.

Bansi underwent 17 surgeries to try and repair the damage.

“Miracles do happen,” says Lalita Ben Bansi, 26, as she gets ready for her wedding reception in Mumbai on Tuesday.@StopAcidAttackspic.twitter.com/BDtjdhjCpG

“So many surgeries later, too, my face was deformed. In need for change, I moved from Azamgarh to Kalwa in Thane near Mumbai,” Bansi told The Hindustan Times this week at her wedding ceremony.

That’s where she met Ravi Shankar. The two met when Bansi dialed the wrong number, according to the report. They then decided to get to know each other.

Read More: Acid Attack Victims, Cast Out by Society, Are Helping Each Other Thrive

“Miracles do happen. Who would have thought an acid attack and 17 surgeries later I would find love?” she said. “Shankar taught me to believe in love.”

“I liked her from the beginning,” Shankar told the newspaper. “I had to only convince my mother to accept my choice.”

But Shankar’s task wasn’t just convincing his mother; he also had to convince Bansi she deserved love, too.

“I had to make Lalita believe that she too had the right to a better life,” he told the paper.

Acid attack victims are often forced to live lives of social exclusion following their attacks. There can be fallout with their families, if the attackers are family members, and many struggle to get jobs, to date, and to flourish.

Bansi’s story is indeed an example that miracles  — even the small miracles of hope and love — do come true.