When more people have access to cell phone service than piped water there is a problem. 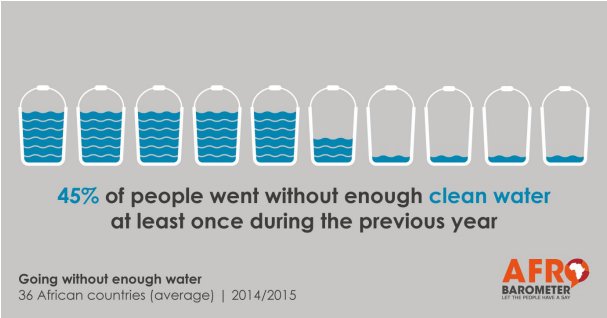 More people than ever before have access to reliable water since the creation of the Millennium Development Goals in 2000, but only 51% of Africans can easily access clean water.

Meanwhile, 93% of the population has cell phone service.

This jarring disparity shows how development progresses unevenly and cheap technology like cell phones that can be individually purchased often arrive before more intensive investments like piped water.

Most of this inequality is concentrated in rural communities in Sub-Saharan Africa.

More findings like these were recently compiled through a six round survey and nearly 54,000 interviews conducted in 36 African countries between 2014 to 2015 by Afrobarometer, the pan-African, non-partisan research network.  he survey shows that water supply ranks fifth in important problems for African citizens across the continent. For Burkina Faso, Guinea and Niger it is the number one problem. Overall, these findings show that some countries still lack crucial infrastructure for access to clean water and adequate sanitation.

The major barriers to clean water and proper sanitation are….

In Africa, the country average for rate of people with access to piped water was 64%. 18 countries were under this mark and Liberia had the lowest level at 17%.

In fact, more than 1/3 of all surveyed communities had no infrastructure to create piped water systems!

In both rural and urban areas surveyed, more than 68% of citizens lived in communities that lack sewage infrastructure.

Lack of sewage infrastructure of course leads to... 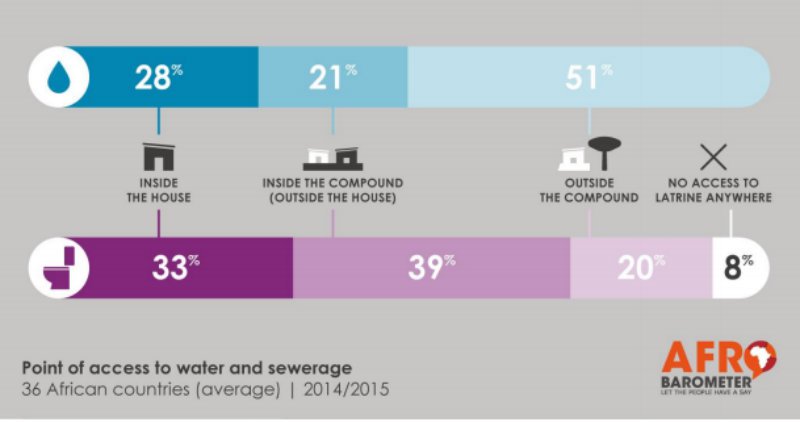 ...this means that only 2 in 10 people live in areas with sewage systems. 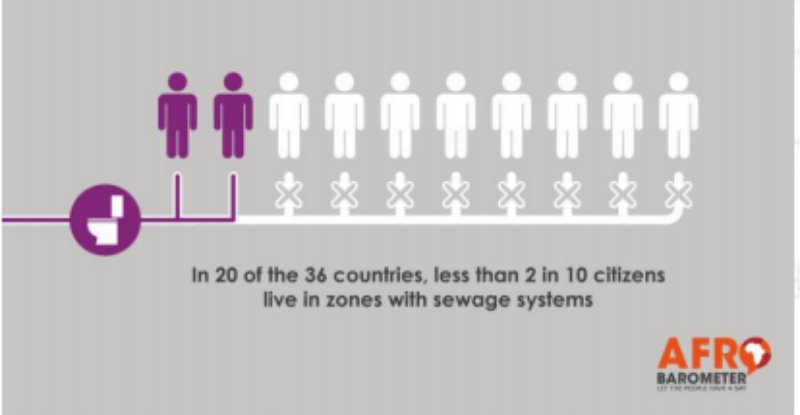 Open defecation is still a great problem in many places in Africa.

4. Living in rural versus urban environments

African citizens living in rural areas have less access to water and sanitation. In North Africa citizens have the most access, while East Africa has the least.

5 in 10 in #Africa say they have gone without enough water. http://t.co/ZejHHHrdgf#WorldWaterDaypic.twitter.com/PX0TeWt0Iv

A 56% majority of African citizens say that their governments handling of water supply is "fairly bad" or or "very bad."

In the 18 countries that have been surveyed since 2005 by Afrobarometer, negative ratings on government’s handling have water supply have gone up by 14 percentage points!

What does access to piped water and proper sanitation lead to?

Having these resources correlates to higher rates of school attendance for girl children, more women being able to take jobs outside of the home, and results in lower levels of gender-based violence. These are just some of the many secondary benefits that arise from improved access to water and sanitation. More immediate benefits include: lower rates of maternal and infant mortality and lower rates of contagious disease.

Going to school is their job, not selling #water@SDGaction#WorldWaterDay#waterjobs@AspenANDE@channelstv@UNICEFpic.twitter.com/nYTLkMPfvM

It’s time to create the infrastructure that will allow everyone to access water and sanitation.